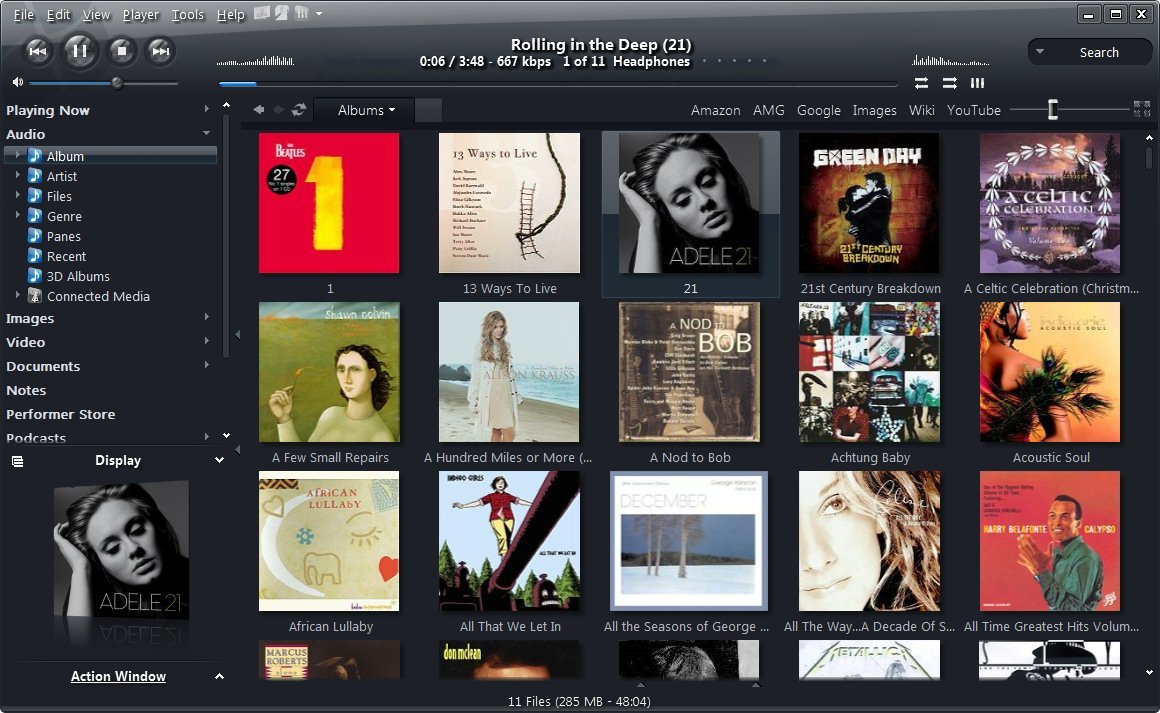 How you improve a streaming system depends on the nature of the system. The most basic and straightforward streaming system is a laptop and a DAC (digital to analogue converter). The audiophile approach is to use a dedicated audio server and streamer, sometimes built into the same box. Many take the convenient route of a smartphone/tablet and Bluetooth speaker, which is the least expensive option but also the lowest quality. Bluetooth limits the sample rate of the music files being played and Bluetooth speakers are usually very crude devices. However, more and more good quality DACs are equipped with a Bluetooth receiver so this option has potential and if both phone and DAC are capable of the higher quality aptX Bluetooth protocol all the better. The other major improvement you can make to Bluetooth streaming is to use a decent music format – see below. For the very best results with streaming a wired system is the way to go and there are two basic options to choose from.

Computers offer tremendous flexibility, plenty of storage space and we’ve all got them, so it’s no surprise that they are the most popular source for streamed music. But they are not designed for sound quality and are relatively easy to improve for this reason. First of all find playback software that goes some way to turning off background activity on the CPU. Audirvana Plus for the Mac does this and is one of the best sounding apps for that reason. The Audirvana site has a lot of tips for improving sound quality with a computer, and these are worth trying.

JRiver is one of the most comprehensive software players on the market. It’s available for PC and Mac and offers huge flexibility in terms of set up. Getting the hang of it is a bit of a steep learning curve but once you have it nailed the features it offers are fantastic. There is also the JPlay plugin that can be used to improve JRiver sound quality, offering further refinements to the package. 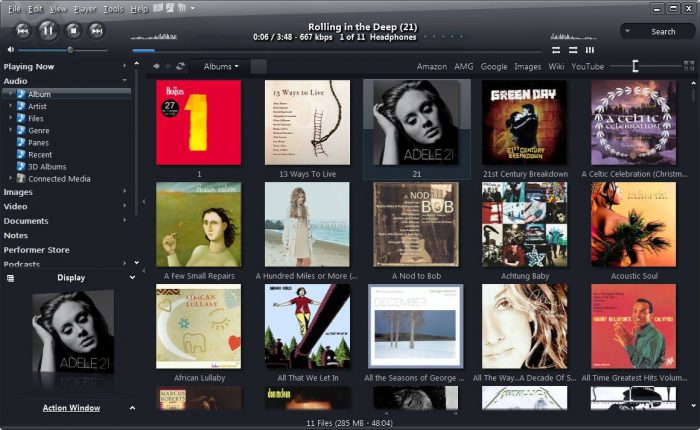 The next step up from computer sources are dedicated audio streamers made by hi-if companies such as Naim and Linn. These usually comprise a NAS hard drive for storage, a streamer/renderer with or without onboard DAC and a network switch to connect both units to the router. In such set ups there are switch mode power supplies on both the router and NAS drive that warrant replacing with linear alternatives. There are also Ethernet cables between all four elements, the most critical being those between NAS and switch, and streamer and switch. Oddly it’s the one to the NAS that seems most critical and therefore the first to upgrade to an audio quality cable from brands like Chord Company and AudioQuest. If you want to go all the way (who wouldn’t?) replace the link from router to switch with a fibre cable and the requisite Ethernet to fibre converters. This is not too expensive and effectively isolates the audio network from the home network/world at large.

In my experience Ethernet connections sound better than USB ones. It’ hard to make direct comparisons of the two because Ethernet usually involves a streamer/renderer in the chain. But a few products allow both connections and they consistently reveal Ethernet to be more musically involving thanks largely to better timing. And that is the area where streaming systems are weakest compared to traditional audio sources like vinyl and CD. Streamers usually produce a more relaxed sound than CD and their ability to use higher resolution formats gives them a further advantage in this respect. But there is something inherent in the extra processing and signal sending in a streaming system that undermines timing, so anything that improves this side of the equation is useful.

MP3 was created in order to store music on the relatively small hard drives of computers and iPods in the late nineties. It meant you could carry hundreds of albums around in your pocket and became the de facto standard for music files. But in order to achieve such small file sizes MP3s have to give up all but the fundamentals of the musical information, which is almost tolerable with some types of music but ultimately results in a crude imitation of the original, an imitation that has pretty poor sound quality by the standards of CD or vinyl. The most popular format with those looking to get great sound from streaming is FLAC, a lossless compression system that is space efficient yet doesn’t give up information for the sake of portability. Now that hard drive space is so inexpensive we have no excuse to use anything less. If you are very keen there are two uncompressed formats as well, WAV and Apple’s AIFF, these don’t require ‘unpacking’ on playback ,and with more affordable streaming equipment, that can result in improved sound quality.

Read More: How Can I Begin To Build A Sound System Which Is Upgradable?

The cable that connects a computer to an audio system is fundamental to the sound quality – it’s where you should make the first upgrade because the rewards are potentially huge. This was brought home to me when I put a Vertere dFi mini jack to RCA cable between my Mac and an amplifier, it managed to produce better sound than the USB output and a DAC, which it really shouldn’t have. A decent DAC and USB cable will usually better the onboard converter on a computer but a good analogue cable can make a big difference. The same goes for a good USB cable – again the first upgrade is usually the biggest with cables, spending £30 – £50 on a piece of wire might seem excessive but it brings surprisingly great rewards in terms of musical enjoyment. 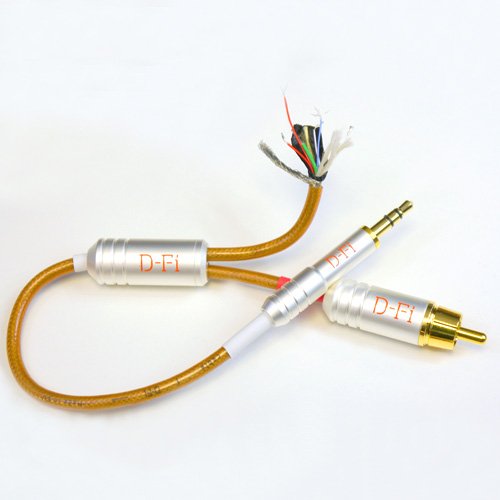 The main problem with digital audio systems is noise. They may produce silent backgrounds but they are also a source of electrical noise that gives them a hard, cold sound. Computers are particularly severe sources of noise and there are a number of companies that produce devices to clean up the voltage coming out of a USB socket. Use one of these between the laptop and DAC to reduce noise getting into the audio system. Another source of noise are the switch mode power supplies found in wall wart adapters. These are often supplied with the more affordable digital to analogue converters and if you can find a linear power supply to replace them with this should improve the sound of the DAC and everything else in the system. Switch mode supplies pollute the mains circuit as a whole and not just the device they power.

One way to combat this is with ground cleaning devices like the CAD GC1 and products from MCRU, Verictum and others. These can be used to clean up the mains power for a whole system or attached to the most likely source of pollution which is usually the NAS drive or server. They are not inexpensive and thus only sensible in highly revealing systems, but if you have one of them they are pretty well essential.

For best results use wired connections in a streaming system – this allows higher resolution files to be used and is not prone to drop-out. Wired systems are generally more robust if not entirely bullet proof. Inevitably cables matter too, some would rail against the notion that the packet data sent around streaming systems can be affected by cable quality but in a revealing system differences are fairly obvious.

NAS drives are computer peripherals and thus relatively inexpensive in pounds per GB of storage but they are designed for fast access without regard for low noise. In other words NAS drives are a source of distortion in an audio system. For this reason a number of companies build dedicated audio servers that have linear power supplies and mains filtering systems in order to keep noise at bay. They often have direct USB and Ethernet outputs as well, which means you can eliminate the intrinsically noisy network switch from the system. The server connects to the router and its output goes straight to a streamer or DAC, you can use a tablet or phone based app to control which music gets played. A number of brands produce these including Melco, Naim and Innuos, prices are quite high, which restricts their use to high end systems, but if you want the best sound from your streamer they are the way forward.