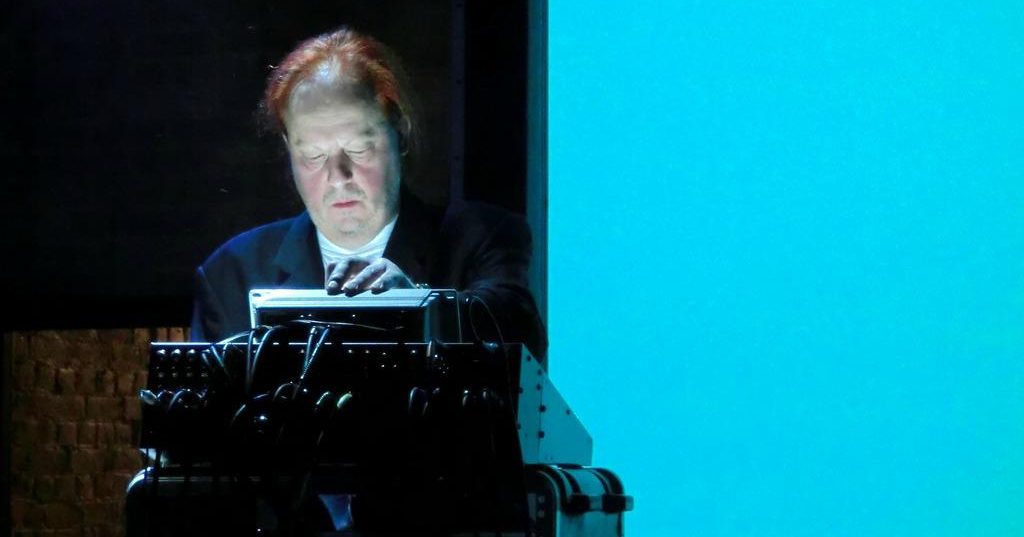 Richard H Kirk, the man of many names such as ‘Agents With False Memories’, ‘King Of Kings’ and ‘Nine Miles Dub’ first came onto the scene during the seventies founding the seminal industrial band, Cabaret Voltaire. More recently created as a solo artist for labels such as Warp, Rough Trade and Mute. Here he has shared with us his favourite albums…

Richard H Kirk also joined Classic Album Sundays founder Colleen ‘Cosmo’ Murphy for her Sounds of a City series for BBC 6Music which you can listen to at https://classicalbumsundays.com/sounds-of-a-city-the-human-league-travelogue-2/

Rest in Peace and thank you for the music.

This album came like a blast of fresh air for many young men and women in England in the early seventies. It gave them the freedom to be flamboyant, sexually ambiguous and express themselves through the way they looked. The music was highly emotional, futuristic and spoke of space travel and apocalypse. After the denim clad bands of the previous era, this was a welcome change.  It was intelligent pop music that made your parents scared with its “Clockwork Orange” references (in fact bowie used Wendy Carlos’ music from the film as his intro on the “Ziggy” tour that I saw as a 15 year old kid). And what great guitar from Mick Ronson. Ever the chameleon, Bowie later helped bring electronic music to wider attention later in the seventies with albums ‘Low’ and ‘Heroes’.

From the intro which sounds like a cocktail party in progress, this LP starts like it means it. You’re aware something new is going on as the band launch into ‘Remake Remodel’, the blistering opening track. ‘Ladytron’ was described by one reviewer at the time as being ”the best psychedelic recording since the Electric Prunes’ ‘I Had Too Much To Dream Last Night’”. Electronics, free jazz, Velvets- style dissonance, doo-wop, Hollywood movie screen dreams, and psychedelic style guitar often processed by Eno, it is all at once retro and futuristic. The clash of styles which shouldn’t really work and the band’s image, one of glamour, sci-fi and decadence was totally intoxicating in a similar manner to David Bowie. I was fortunate enough to catch some of the bands early shows which usually started in total darkness except for the tiny red glow of lights from Eno’s synthesisers with the electronic pulses of the Bob Medley providing a menacing scene-setter. A truly inspirational album and the use of tape recorders in the context of rock music was totally unknown at the time.

Sex, drugs, but not exactly rock n roll. Deviant New Yorkers adopted by Warhol, credited by Marshall McLuhan in The Medium is the Massage as inventing light shows. I discovered this music via David Bowie in the early seventies. Let’s just say it was a blueprint for Cabaret Voltaire on many level .(we recorded a cover of “Here She Comes Now” on the first EP). Its like everything is turned up full, but it also does have a dark kind of beauty about it. John Cale was quoted as having said, ”We were trying to do a Phil Spector thing with as few instruments as possible”. And then some. Hearing a track like ‘Sister Ray’ opened up the possibilities for me. The drone/raga/relentless battle between the instruments, used as if one and the words were unlike anything else heard in “rock” music but more like something from a novel of a film noir script. Recorded in one day.

Interpol and Deutsche bank, FBI and Scotland Yard – Kraftwerk saw the future of technology with this release. Time-Travel-Communication-Entertainment. Business-Numbers-Money-People. The notion of computers controlling /monitoring our every moment. What we now call the ”digital footprint” was unsurprising considering the radical political scene in Germany in the late 60s/early seventies from which Kraftwerk emerged. The music – uplifting but also melancholy with beats/sounds later being sampled by many artists black and white. They invented electronic dance music as we know it. Everything is based on ‘Numbers’ now.

Although not as well known as some of his contemporaries, this album by Keith Hudson has always been special to me as it was one of the first real dub albums that I came across (I actually heard it on John Peel’s radio show at the time). It triggered a lifetime appreciation of dub music that still endures to this day and by default was a big inspiration on my work with Cabaret Voltaire and beyond. There were some blues clubs/shebeens in Sheffield at the time, where often to the surprise of the mainly Jamaican regulars a young white boy could immerse himself in the bass and grind of the sounds vibrating from the huge speakers (often home made from old wardrobes and cabinets). The fizz of the hi-hats, disembodied guitars, mournfull sound of melodica (Pablo?), and rumble and clang of drum and bass, this record has a lovely atmosphere and warmth.

There should be albums by Mlies Davis, George Clinton, Can, Sun Ra and James Brown here. This “top five” selection is valid at the time of writing but it could be different in six months time or even tomorrow.

Classic Album Sundays with Davie Davis of The Kinks at The...