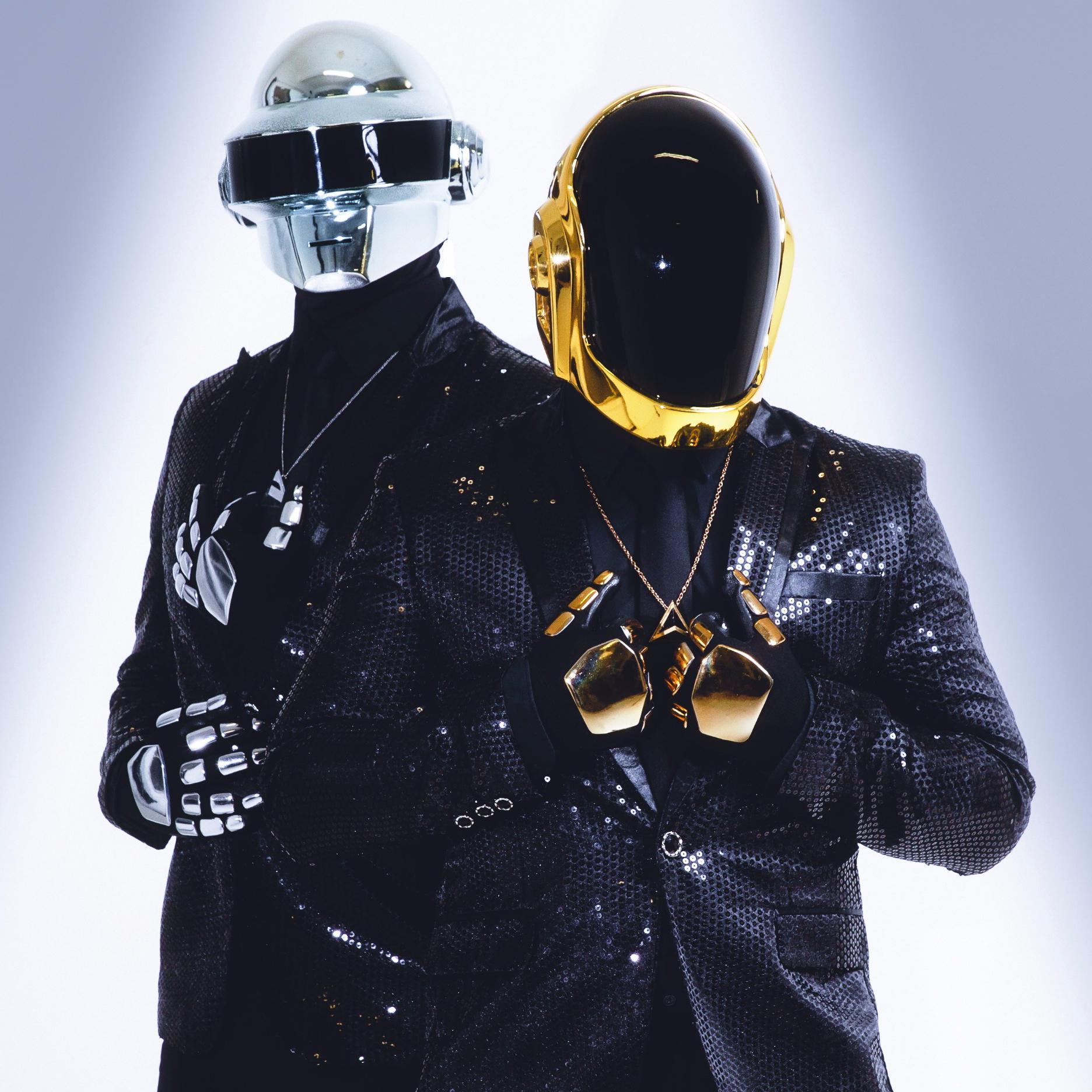 While electronic music is all around us today, that wasn’t the case when Daft Punk embarked on their first successful music journey away from rock music. They have made a distinguishable mark on techno, rave, and electronic music around the world with their perfectionism and imagination, but none of that would have been possible without the artists that came before them. Many of their songs give tribute to these artists through sampling, and if not that, they found other ways. Take a listen through this playlist via Tidal or Spotify and see if you can recognize how they fit into Daft Punk’s music.

Nile Rodgers, the brain behind Chic, play his Fender Stratocastor with a natural funk- his rhythmic strums are the first layer of sound to inspire a club to start dancing, and his chords are tight and sweet. Daft Punk are huge Chic fans, which inspired them to invite Rodgers to contribute to guitar lines to many tracks on their latest album, Random Access Memories. The feeling created in “Good Times” is successfully adapted to many songs on the album, most notably “Lost Yourself to Dance” and “Get Lucky”.

George Duke “I Love You More”

Daft Punk yanked the first ten seconds from George Duke’s “I Love You More” to craft to the most sugary pop song on Discovery, “Digital Love”. The sample serves as the primary melody and is stretched to the length it deserves— I’m surprised Duke didn’t realize the small riff could be a song in itself, since it is basically forgotten as the song progresses. The slap bass and guitar riffs that enter “I Love You More” afterwards are juicy, though.

Daft Punk thank the people and musicians who have influenced their music quite simply on Homework’s “Teachers”— if any of the band’s influences are missing from this playlist, they can be found here. The band organizes the pronunciation of each person’s name to fit to the exact beat and hook of the song, and it’s obvious that each name isn’t said at random. Even though the basic concept of the song is so simple, Daft Punk’s perfectionist tendencies make their tribute danceable and inspire you to sing along, perhaps with the names of inspirational figures you have in common.

Waxmaster is one of the names mentioned on “Teachers”, and it’s immediately obvious that the rapid speed behind “Pump Down 2 Da Ground” inspired the tempo behind many songs on Homework, especially the second half of the album. The syncopated vocal samples Waxmaster’s uses to dice up the song’s main lyric can also be heard on “High Fidelity”, where the vocal clip is used as a piece of percussion. “Indo Silver Club” holds a similar tempo to “Pump Down 2 Da Ground” and contains similar bass lines that make you nod your head back and forth.

Phortune “Can You Feel the Bass?”

According to the recent Daft Punk biopic, Daft Punk Unchained, “Can You Feel the Bass” is the Chicago house track that inspired Thomas Bangalter and Guy Manuel de Homem-Christo to discontinue their music writing in rock in exchange for techno music. They heard the track when they went to their first rave in 1993 and realized the feelings from “the bass” could be much greater with further experimentation. Bangalter’s father, Daniel Vanguard, would help them do so in directing Daft Punk to make music similar to “Can You Feel the Bass, creating French dance tracks with English lyrical hooks.

Primal Scream’s Screamadelica is an essential album for the exposure of techno, rave, and acid house beyond the underground and across the world. Primal Scream was Rolling Stones-esque rock band before Screamadelica, making the album one of the most thought-provoking and successful departures of it’s time— it was even maintained relevancy with the wild success of Nirvana’s Nevermind. De Homem-Christo cited the album as the piece of music that allowed him to understand electronic music. It’s influence is obvious in how Daft Punk builds their songs using an upwards crescendo, where new beats are gradually added as a song plays to give it fresh, new energy.

When Daft Punk started production behind Discovery, they wanted to explored new electronic territory aside from techno and rave, which they had nearly perfected with Homework. In an interview with MTV in 2001, Aphex Twin’s “Windowlicker” is “neither a purely club track nor a very chilled-out, down-tempo relaxation track” that tests what can be done within six minutes. Richard D. James, the man behind the moniker, elicits different emotions through the track’s duration and confuses what should be felt when it enters its final seconds.

Discovery not only exceeds what was expected of electronic music could be at the time but also its influence on a variety of cultures. Daft Punk was highly influenced by Japanese art, which led them to create Interstella 5555. Intastella is a silent, Japanese anime  they created with Meiji Matsumoto, one of their childhood heroes, that is brought life with Discovery as its soundtrack. Cornelius, a Japanese electronic producer, makes similar strides with his music, especially on his third studio album, Fantasma. “The Micro Disneycal World Tour” carries a  celebratory feeling that can also be found on Discovery’s “One More Time” and “Face to Face” with a smorgasbord of samples ripped for records from crate digging adventures. He blends his Japanese tastes along with these samples to make an expansive and fun sound collage.

One of the most impressive samples on Discovery utilizes the wonky funk riff that makes up Edwin Birdsong’s most well-known song, “Cola Bottle Baby”. It’s used in “Hard, Better, Faster, Stronger”, and when the song begins, the sample is played backwards then twisted again to make the song sound like it’s spinning in circles. Eventually, the sample sounds recognizable of Birdsong’s composition, where the band sings the track’s lyrical commands using a vocoder. Considering most of this experimentation is done with the first thirty seconds, it’s impressive how endless Daft Punk’s imagination really is.

Similar to “Cola Bottle Baby”, Daft Punk’s use of Gershon Kingsley’s “Pop Corn”, one of the first successful synthesizer songs, shows how knowledgeable the band is on the history behind electronic music. In many of their songs, they transform a successful element of the genre and add their own funk and oddities into the mix to make it their own. According to Mix Mag, Homework’s “Around the World” was inspired by the beat organization of “Pop Corn” to make its bouncy bass line and robotic vocals truly come to life.

While Daft Punk dominates French rave culture, Air is known as a pioneer in French chill wave. The band uses their synthesizers to craft peaceful arrangements more appropriate for mediation and reflection and less aggressive dancing than Daft Punk’s uses. “Ce matin-la” takes produces numerous musical spaces for their listeners to wrap their minds around and glows from its serene instrumentation. If it sounds familiar, you may remember it from The Virgin Suicides, where it serves as the soundtrack for the neighborhood boys fantasizing about the Lisbon sisters while reading one of the girl’s diary.

Many of Daft Punk’s songs recycle pop songs from the 70s and 80s to make their style of electronic music fitting for any club or disco. Giorgio Moroder is a producer who not only revolutionized pop music with the use of the synthesizer but also crafted a number of successful singles that are still remembered today. “Love to Love You Baby, featuring Donna Summer on vocals, is his most memorable work and probably served as a high influenced when Daft Punk assigned vocal arrangements to tracks on Discovery. Moroder also contributed to Daft Punk’s latest album Random Access Memories.

Next: Check out our legacy playlist