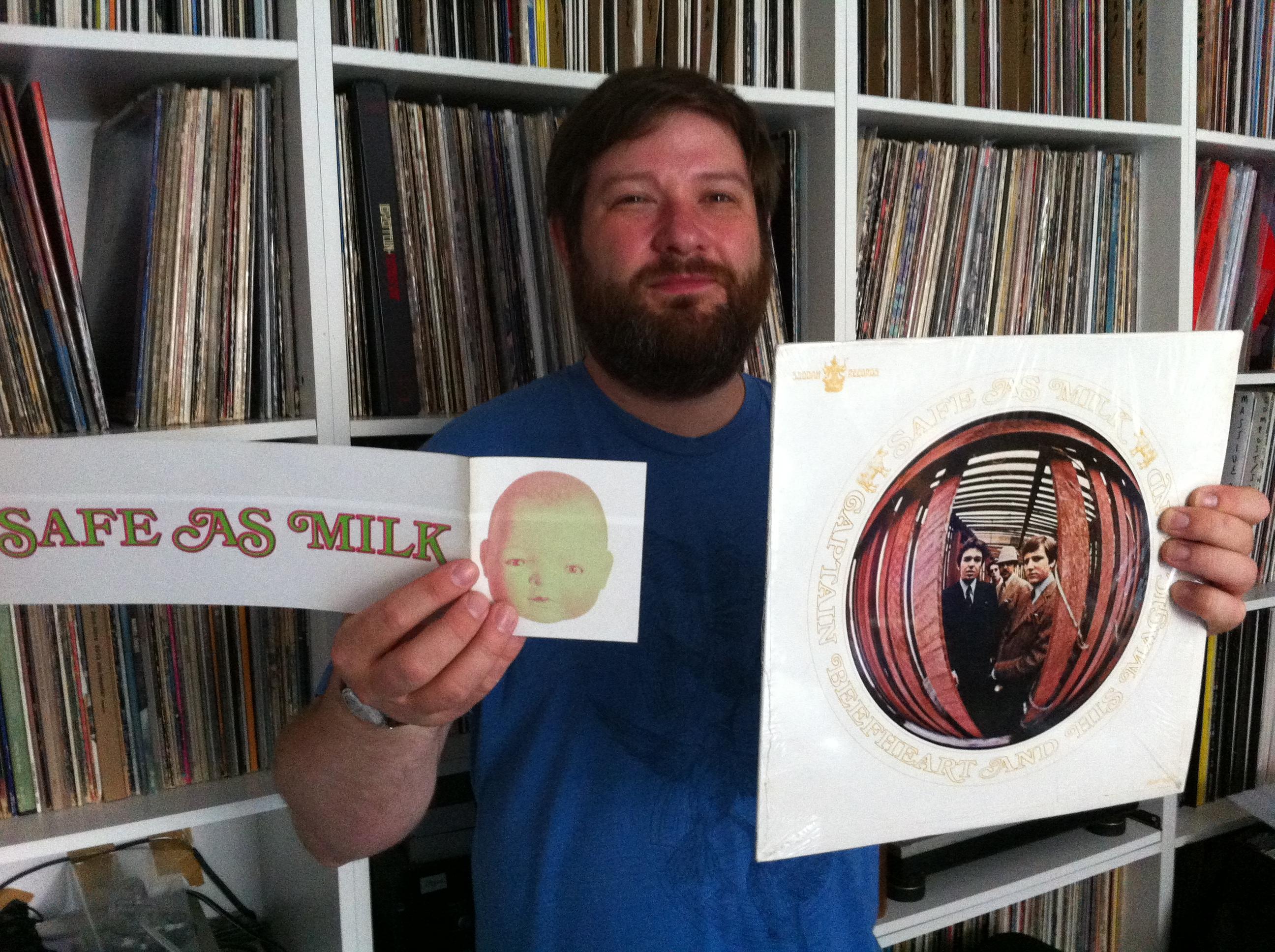 Domino Records International Head of Production Paul Briggs joined us to present Captain Beefheart’s debut album “Safe As Milk”. We played it in mono, too. Now over to Paul…

Captain Beefheart. For those of you unfamiliar with the story behind the name, there are actually two. The first is that Don Van Vliet and Frank Zappa were writing a screenplay with a playfully nonsensical title “Captain Beefheart vs. the Grunt People”. The other, which he would also recount on occasion is a crass metaphor based on the resemblance of his exhibitionist uncle’s private parts to the aforementioned bovine anatomy.  Let us hope it was the former, but with Van Vliet you never can tell…

Now a lot of artists have far out names, so this was by no means a guarantee of great art. But when I heard “Safe As Milk” (my first Beefheart album), I knew that here was one “far out” guy, in the best and most exciting way !  It has an energy and “in your face” power that caught me unawares and still does albeit to a lesser extent each time I listen. Great and catchy though it is, the record bombed in America and was only a very minor hit for the emerging psych heads in the UK (John Lennon is famously photographed with not one but two of the now famous “Safe As Milk“ bumper stickers in his London flat).

The backdrop for the album is that having completed two singles for A&M (which were relatively “accessible” blues pop), Captain Beefheart and his magic band began demo tracks for their debut album on an 8 track stereo recorder in 1966 at Sunset Sound studios (at that time a very new and expensive technology).  The A&R executive Jerry Moss was not, shall we say enthused about the more avant-garde direction the band had taken, and the band ended up signing to the new Kama Sutra records imprint “Buddha”. “Safe As Milk” was their first LP release.

This is somewhat ironic because although the label although intended to be a multi-genre label encompassing not only bubblegum pop but also soul, folk rock and “experimental” music (Gladys Knight, Melanie and and the Lemon Pipers were all on their books at one time or other) Beefheart were the only act signed to the label to fall within the latter (one can only imagine they learned the hard way!).

The demo tapes were taken to the RCA studio to be transferred to 4 track (at the insistence of Krasnow). It was during this time that Doug Moon left the band and Cooder re-recorded his guitar parts. The core lineup also featured Alex St Clair on guitar, Jerry Handly on bass, and John French on drums (who would later prove invaluable during the arrangements of the “Trout Mask Replica” album). Taj Mahal played percussion and Richard Perry was the producer.

Interestingly Herb Bermann, who had befriended Van Vliet in a bar, was credited as co-writer for 8 of the tracks on “Safe As Milk”. But Van Vliet never discussed this involvement and so until 2003 when his involvement was finally authenticated, several members of the band though it to be a fictional alter ego (for publishing reasons). As regards the title, the album may well have been called “Abba Zaba” (after Van Vliet’s favourite candy bar) had the owners not refused permission. And the track “Safe as Milk” is not on the LP – recorded at  a jam session after its release, in  November and December of 1967 – these sessions are now referred to as The Mirror Man sessions and included as bonus tracks on CD reissue of the album.

The album was completed in the spring of 1967, and released in September of that year – the first release by the new collective Captain Beefheart and his magic band, a line up that with some changes lasted until 1974.

To put the album in to context, that year had also seen the release of both The Doors eponymous debut and “Strange Days” (the latter on the same day as Safe As Milk),  The Velvet Underground And Nico, Scott Walker “Scott”, The Byrds “Younger Than Yesterday”,  Jimi Hendrix “Are You Experienced”, and of course “Sgt Pepper”.

So Captain Beefheart had an odd name as we know, and he was somewhat mysterious about the source of lyrics for the album, but it didn’t stop there…He was certainly not known for his patience or artistic tolerance either (the battles and fallout with Zappa are well documented), and Ry Cooder (who replaced Moon’s guitar parts) recounts a story his predecessor told whereby Van Vliet berated him so much that he confronted him with a loaded crossbow. Van Vliet duly retorted “Get that fucking thing out of here, get out of here and get back in your room”. Moon duly obeyed and so it seems the Captain had some sort of Mercurial power over the band. Whether Cooder heard this story before or after joining the group is not clear. If he did it was a somewhat brave move, but a risk we can all be thankful for! Another story recounts how Van Vliet became seriously prone to anxiety attacks on stage (partly due to the fact that his father had died recently from heart failure but no doubt made worse by his heavy LSD use). The latter was to prove catastrophic to the success of the album. At a Monterey warm up gig Van Vliet became convinced that a girl in the audience had turned in to a fish and begun to bubble at the mouth. He straightened his tie and promptly walked off the 10 foot stage landing on the manager. Perhaps unsurprisingly, Ry Cooder quit the band and Monterey was canned due to the lack of suitable replacement to undertake the complex guitar parts required.

And although I would never revel in the misfortune of this type of chaos, there is an amusing irony that the cover features the band and Van Vliet dressed as kind of 60s dandies, in crisp smart suits (albeit through a fish eye lens – suggesting  the prevailing psychedelia of the time).

And so on to the music.

Opener “Sure Nuff n’ Yes I Do” is out and out delta blues stomp, “Zig Zag Wanderer” with its foreboding gong intro leaps headlong in to double tracked jangling West Coast style garage guitars, while “Call On Me” is an out and out twisted R’nB track – all swagger and sass. And then Van Vliet drops his voice to an even lower pitched growl for “Dropout Boogie” – the title suggesting  psychedelia and counter culture but actually reported to be a semi-autobiographical song about Beefhearts struggle to find stable employment within a relationship – then halfway through the time signature shifts wildly and we climb aboard a harp driven Vaudeville merry go round which Ry Cooder riffs relentlessly to fade. This track is been covered to great effect by The Kills on their  magnificent “Black Rooster EP” (2002).

As if to soothe our frazzled senses, the band and Captain turn the wick down on “I’m Glad” with a kind of doo wop close harmony soul ballad complete with horns– of course the Captain delivers the plaintive vocal with constant grit – well it just wouldn’t be the same if he didn’t!

And then the side closes with a kind of haunted sermon on “Electricity”, complete with Theremin warbling and insistent off beat drums.  Another influential track in (fairly) recent times, Sonic Youth cut a version on what to me is their finest album “Daydream Nation” (1988).

On the flip we are treated to recording test tones (a temporary diversion to remind the listener how the format is being subverted?) and then off we romp on what is really the albums most outwardly pop track “Yellow Brick Road”. Followed by the Afro rhythm inflected “Abba Zaba”, embellished with some wonderful percussion by Taj Mahal and another Rn’B cracker “Plastic Factory”. I defy you to find better blues harp playing. By the end of the track it’s simply wailing!

There really isn’t a duff track on the whole LP but rather than me continue track by track right to the end it’s really best with an album this “other worldly” to leave it your ears.  Lester Bangs famously called Captain Beefheart “the only true Dadaist in rock”, and I think that’s what precisely what he was trying to do, throw the musical rule book out, or at least re-write it in some way. So in a way you could say Beefheart also qualifies as a kind of punk.

But just before we listen, let’s move to the recording for a minute. And how we’re going to listen to it.

“Safe as Milk” was issued in both mono and stereo so I’ve been able to compare the two.

I can’t really quantify or objectively explain why, but the mono mix just sounds better.  It has an immediacy and power that is slightly lost in stereo. And despite there being a mono version issued on Pye in the UK at the time, it’s universally thought to be a “fold down” where the left and right channels of the stereo mix have just been blended together. This is not the same as a true dedicated mono mix. The original Buddha mono master has been lost so this is really the only way to hear it.

Ry Cooder has actually been quoted as saying the original master tape recordings are great but the mix is poor. I respectfully disagree. The muddy, slightly messy, “on the edge” sound is precisely makes the album so great.