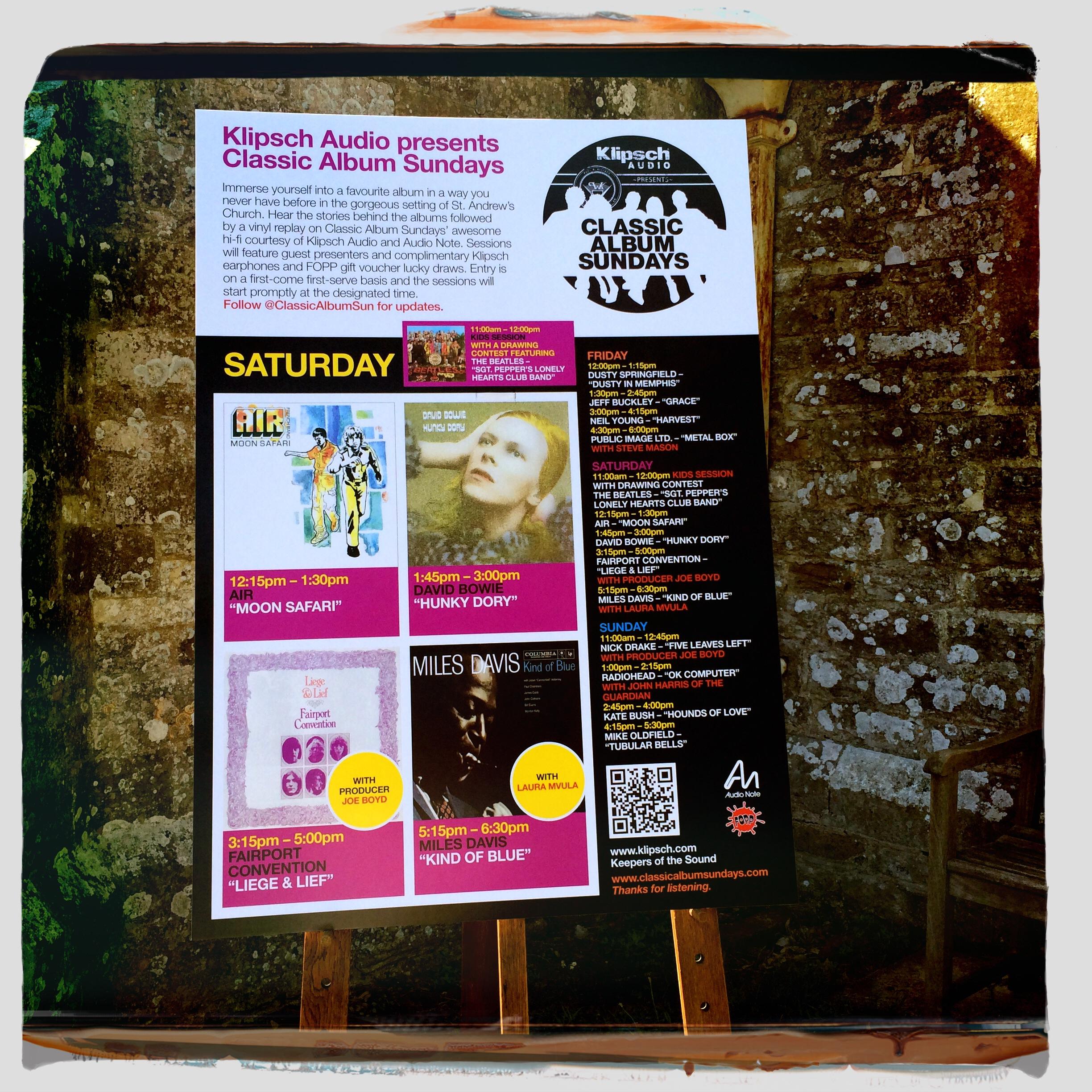 This year was our best run at Camp Bestival ever! We outgrew the castle playroom a  while back and this summer we held our sessions in St. Andrew’s Chapel – a fitting environment for our righteous musical worship.

The loud and proud American loudspeaker company, Klipsch Audio, powered us which was fitting as we used their legendary Klipschorns the first time at the festival. The K-horns (which have been in production since 1946) are so big we couldn’t even crowbar them into the church so we used the second loudspeaker Paul W. Klipsch designed in 1963, the La Scala (updated as the La Scala II) and threw in a couple of SW-115 subwoofers for good measure. The pews were vibrating during our Public Image Ltd playback (and it must have been one of the few times Johnny Lydon’s voice could be heard ringing through a nave).

The loudspeaker horns were powered by a complete analog system courtesy of Audio Note UK. The massive valves on the amplifiers were glowing like the candles that graced the church aisle, creating a blissful atmosphere in which to listen to a system that sounded like music.

We had a wonderful array of special guests including Laura Mvula who made her father proud by presenting Miles Davis’ ‘Kind of Blue‘, Steve Mason who came up with the interesting idea of playing PiL’s ‘Metal Box‘ in a church (and gave Colleen an excuse to spring for an original pressing in the original 16mm film canister packaging) and the legendary producer Joe Boyd who presented two of the albums he produced 45 years ago: Fairport Convention’s ‘Liege and Lief‘ and Nick Drake’s ‘Five Years Left‘. John Harris from The Guardian told us the story on how he helped persuade Radiohead to change their name from On A Friday (thank you John) during his ‘OK Computer’ presentation which had us chuckling. Videos of the presentations will go up on our YouTube channel soon.

We had such a great time that we decided to do it all over again and we are now in the midst of our Bestival plans with Klipsch. We hope to see you chilling in our sonic oasis in the Woodland Treehouse Centre in the middle of the Ambient Forest for another three days of listening pleasure this coming September. More info coming soon.