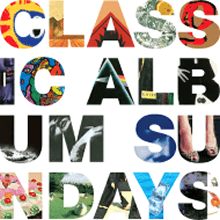 Did I have any idea that our small monthly gathering of album appreciators would end up in the international press? Hell no! However, I am happy that it has made album listening a hot topic that has surprisingly triggered a bit of a debate (although it never occurred to me that a debate could arise regarding album listening). I have received so much amazing feedback as most music devotees recognise the worth of taking time out of our hectic lives to listen to a great piece of music. As it courses through the media, the story has taken its own life with the contribution of writers, editors and commentators and their diverse viewpoints and angles. Let the debate begin!

Listening quietly with other people

Album listening can happen in a variety of contexts and it really is not an either/or type of situation. Most of my album listening experiences have been in real life circumstances: by myself at home or in the car or at parties or with loads of other people chatting and dancing. Classic Album Sundays just offers another type of experience: listening with a group of like-minded people in a quiet setting on an audiophile sound system. The “quiet” guideline has never had to be enforced much like the atmosphere of a movie theatre screening a film. It is a pretty relaxed event and the people that are there want to be there and want to listen without being distracted. For those that don’t want to listen with other people, Greg Wilson’s Living to Music blog which inspired CAS encourages people to listen to a designated album on a designated day in their own home and then post their experiences. There are loads of ways to listen to albums and nobody is saying that listening quietly in a group is the right way to appreciate an album – it is just one of the many ways. One blog commentator thought this type of listening was offensive which just made me laugh. Out loud.

Audiophile and Analogue vs. MP3 downloads

MP3’s have about 20% of the sonic information so are best suited for shallow listening. It is kind of like reading the Cliff’s Notes instead of enjoying the nuance, character and depth of an author’s writing. Or like eating a fish sandwich from McDonalds instead of fish and chips on the seaside. However, most people do not have the opportunity to listen to a vinyl album on a Class A Sound System so CAS offers people this chance. I personally feel albums that are recorded, mixed and mastered properly sound superior on vinyl rather than digital as I like the sounds of the bass and the highs and the overall warmth. However, I am not adverse to CD playback and CAS may have to resort to that in some eventuality but they will be full digital files rest assured.

To those that accuse CAS types of being muso, you are right. We are musos. So what? If you are going to be truly into something, music seems a pretty good option.

You can go to the bathroom at Classic Album Sundays. We just ask that you use the toilet downstairs as the upstairs one makes a lot of noise. I would think most people would not want a group of intent listeners hearing them conduct their most private business but then again, it does seem that in this day and age there are some people who need to make themselves heard no matter what they have to emit.

A Roy Orbison Hologram Will Tour The UK In 2018