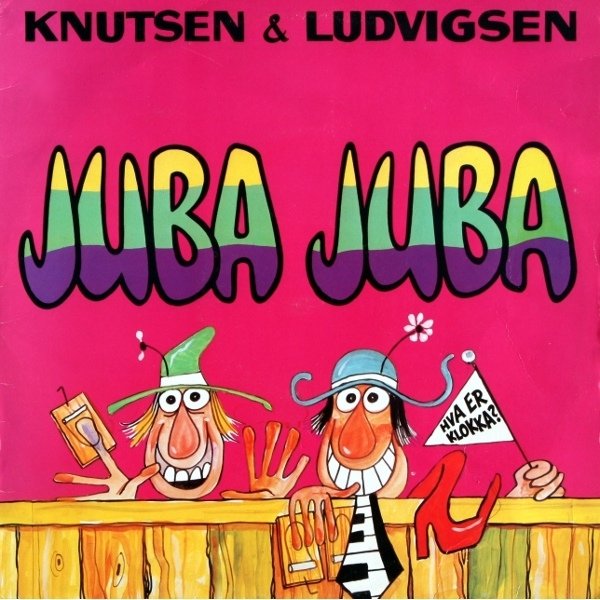 The Norwegian section of our listening club is thrilled and ready for one of the most frenetic and popular records that have been released in the Scandinavian country, Knutsen & Ludvigsen’s ‘Juba Juba’ from 1983. This time we feed our high fidelity sound system with something as unusual as a childrens album, as relevant for the adults as for the youngsters, and it will gorge itself with far more than the weird stories from the album, like the ones about the “seasick violins” and “wheezing drifters stomachs”.

Here are songs regarded as national treasures among people growing up in the 80s. Songtitles and lyrics have been transformed into words and expressions in everyday speech, such as “Dum og deilig” (‘Dumb and Delicious’) and “Kanskje kommer kongen” (“The King May Come”), in “God morgen, Norge” (‘Good Morning, Norway’) and “Eg ve te Bergen” (‘I Wanna Go to Bergen’), not to mention the discoid “Syk” (‘Sick’) – an effective encouragement and cure for the tousled.

KNUTSEN AND ‘BEATLES’
We are visited by Knutsen himself, artist and comedian Øystein Dolmen, telling stories around the recordings with what must be our largest Knutsen & Ludvigsen-enthusiast, Jon Erik “Beatles” Høgvold, the man who in 2008 gathered a superteam of Norwegian artists at Sentrum Scene in Oslo to celebrate the 25th anniversary of the album.

An hour with musical madness and ingenuity got hearts of all ages to jump and families to sing along when the album was released. ‘Juba Juba’ has conquered time over two generations and was among the top 100 Norwegian Albums of all time presented by Falck Forlag and newspaper Morgenbladet in 2011.

When Universal Records rereleased the LP last year we let it spin another round at Duet Audios store in Akersgata – on an audio setup that hides no details from your music. We rediscovered the good tunes, the silly, cheerful approach and the weird and ever relevant stories we’ve let ourselves been carried away by so many times over the past thirty years. Along with the enjoyment of the two playful multiinstrumentalists, Øystein Dolmen (“Knutsen”) and Gustav Fredrik Lorentzen (“Ludvigsen”), a group of musicians and illustrators found a rare opportunity to go crazy with their instruments and tools creating a load of substantial silliness never heard before.

SOUNDABLE
Several of the country’s best sound engineers was involved in the production, with various tasks in the Nidaros studio. Alongside Notabene Records’ own founder, producer Ole Anders Sørli, we find Bjørn Nessjø on bass, although more known as a magnificant producer, as well as the latter’s companion in Nidaros, Rune Nordal, who was engineering the record along with Roger Valstad. Experience from previous successful projects, including with Åge Aleksandersen & Sambandet, Høst, Bjørn Alterhaug, Junipher Greene and TNT, was channeled into the recording. Lorentzen himself was a trained acoustician.

When you sum up the expertise gathered in Trondheim for the creative project of the summer of ’83 it comes of no surprise that this record has become such a curvaceous one. We look forward to hearing it again, in its entirety, on a out-of-your-mind good sound system set up for the occasion.

Tickets: NOK100 in the door or in advance here. Students/Seniors/Juniors half price.