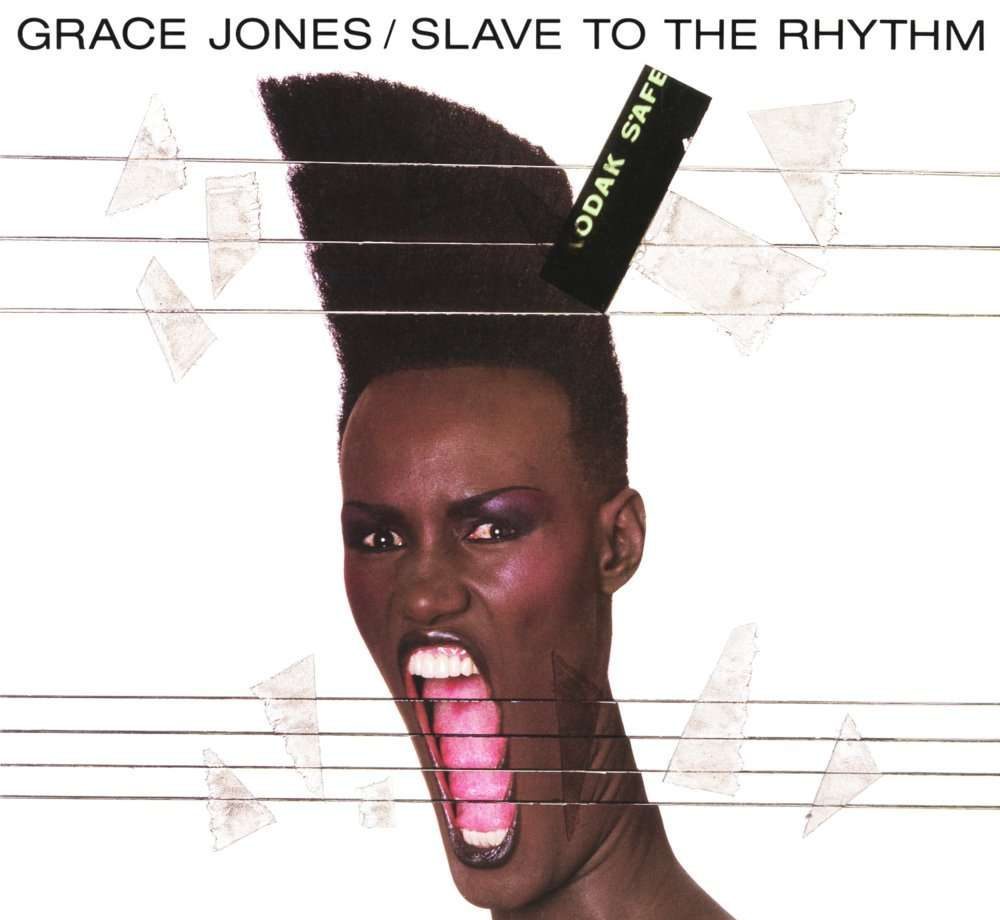 By 1985 Trevor Horn was world-renowned for his bold production having worked with the likes of ABC, Frankie Goes To Hollywood, and Malcolm McLaren. With well over a decade of experience in the music industry, beginning with session and studio work in London and expanding through his time with Yes and The Buggles, he was well equipped to amplify Slave To The Rhythm’s conceptual ambitions. Under his supervision, Grace Jones entered the studio on a weekly basis to record a new version of the song, sticking to predefined thematic and lyrical boundaries to weave a cohesive thread through the album’s eight songs. Gradually the tracks became wildly divergent, and Horn showed typical monetary disregard by stretching the budget to an eye-watering $385,000.

The album spanned a broad sonic range, incorporating elements of funk, r&b, and go-go. Matching its singer’s outsized persona, the songs often have a cinematic quality; on album-opener ‘Jones The Rhythm’ Horn creates a coliseum of sound and Grace sounds gladiatorial in its centre. ‘Operattack’ uses vocal slicing and echo machines to create a horrific, hall or mirrors effect that wouldn’t sound out of place on a musique concrete experiment. And on ‘The Crossing’ sound imposes a moment of tranquility, as synths glide over fields of crickets with nocturnal elegance. The visual elements of Grace’s music had rarely been rendered with such clarity as they had here.

Described as “a biography” in its liner notes, the album is underpinned by sections of spoken word taken from an interview with journalist Paul Morley and a reading of the Jean-Paul Goude biography, Jungle Fever, by actor Ian McShane. The latter famously explored the photographer’s romantic relationship with Grace, which had begun shortly after the pair met in the late ‘70s. Goude shared in her hedonistic lifestyle but also became Grace’s stage manager and album-cover designer, using digital techniques and avant-garde style to create iconic images such as the impossible pose which appears on the Island Life sleeve. The pair had remained intimate until Grace became pregnant with her son, Paulo; at which point Goude decided he was no longer interested.

Goude has come under fire for his depictions of black women, in which he typically enlarges fetishised aspects of their anatomy and darkens their skin tone. Although his work was often seen to reinforce reductive stereotypes, its undeniable that his close and lengthy relationship with Grace at the peak of her career gave him an unrivalled level of insight to both her public and private lives.
But Goude often writes in an abstract and poetic style, opening the album by describing rhythm as “both the song’s manacle and its demonic charge”. When he does mention Grace directly, its couched in awkward, objectifying terms – on ‘The Fashion Show’ he states: “all black people were just, you know, “do it to me, sock it to me” and all that stuff, and there she was, you know, singing “La vie en rose” in French. It was great, you know. So I thought what a wonderful perspective.”

By casting herself as a “Slave To The Rhythm” Grace seems all too aware of these points. Rhythm is not only the percussive tempo of a song, but the relentless machinations of the industry built around her image, her music, her life, and her style. The word “Slave” denotes the ultimate lack of control, but Grace wields it in a way that suggests both the joy of musical surrender and the discomfort of a life spent filtered through the gaze of others.
Her revealingly guarded interview with Morley is positioned as a subtle riposte to Goude’s words – an assertion of control regarding the private details of her life. Her interviewer’s attempts to pierce beyond the persona are met with sly irreverence. A question about relieving teenage boredom receives the enigmatic response: “I floated on a cloud”.

Nevertheless, Slave To The Rhythm still feels like one of Grace’s most personal releases. Whilst it is ostensibly an album focused entirely on the performer, its subtext reveals an effort see beyond herself – a panoramic view of the world that made her a star and its murky history of exploitation, greed and unfettered desire. Far from a simplistic criticism of this culture, Grace seems to recognise the sense of moral entanglement that is impossible to avoid in the entertainment industry. In a culture that is so contrived and transactional, no one can be entirely innocent.

Despite fading from the public eye during the ‘90s, she has remained an active and flamboyant performer who refuses to conform to our preconceptions of a septuagenarian. As the boundaries between gender and sexuality are broken down her career path is inspiring in its refusal of the norms society once hid behind. But despite reuniting with Paul Morley for her aptly titled biography, I’ll Never Release My Memoirs, she still remains a mystery. Like a musical mirage, the version of Grace Jones which appears before us will always be dazzling, inspiring, and ever so slightly out of reach.