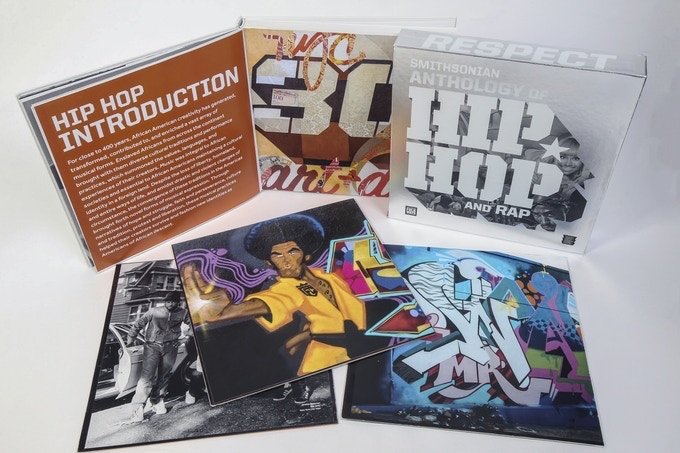 The Smithsonian Institute is preparing to release the Smithsonian Anthology of Hip-Hop and Rap, a new collection of text, music and visuals celebrating the genre’s vast cultural heritage.

It follows two previous anthologies from the organisation – Anthology of American Folk Music, and Jazz: The Smithsonian Anthology – and will feature over 120 tracks across 9 CDs, a 300 page book housing 10 essays, extensive liner notes, and exclusive never-before-published images.

As the project’s kickstarter states: “The Smithsonian Anthology of Hip-Hop and Rap will illustrate different social and political trends within the genre, such as police brutality, feminism, and Afrocentrism. It will explore these themes through music from old school pioneers like the Sugarhill Gang and Roxanne Shanté to artists of today like Kanye West and Nicki Minaj — and four decades’ worth of essential names in between.”

“The Anthology was developed by the Smithsonian in collaboration with an advisory board comprised of members of the hip-hop community including artists Chuck D, MC Lyte, Questlove and 9th Wonder; industry veterans Bill Adler and Bill Stephney; author, journalist and music critic Jeff Chang; and university scholars and authors Adam Bradley (University of Colorado, Boulder), Cheryl Keyes (UCLA) and Mark Anthony Neal (Duke).”

The project is currently seeking backers via kickstarter, and is slated for a December 2018 release. Find out more here.

Read Next: Album of the Month – ‘The Miseducation of Lauryn Hill’