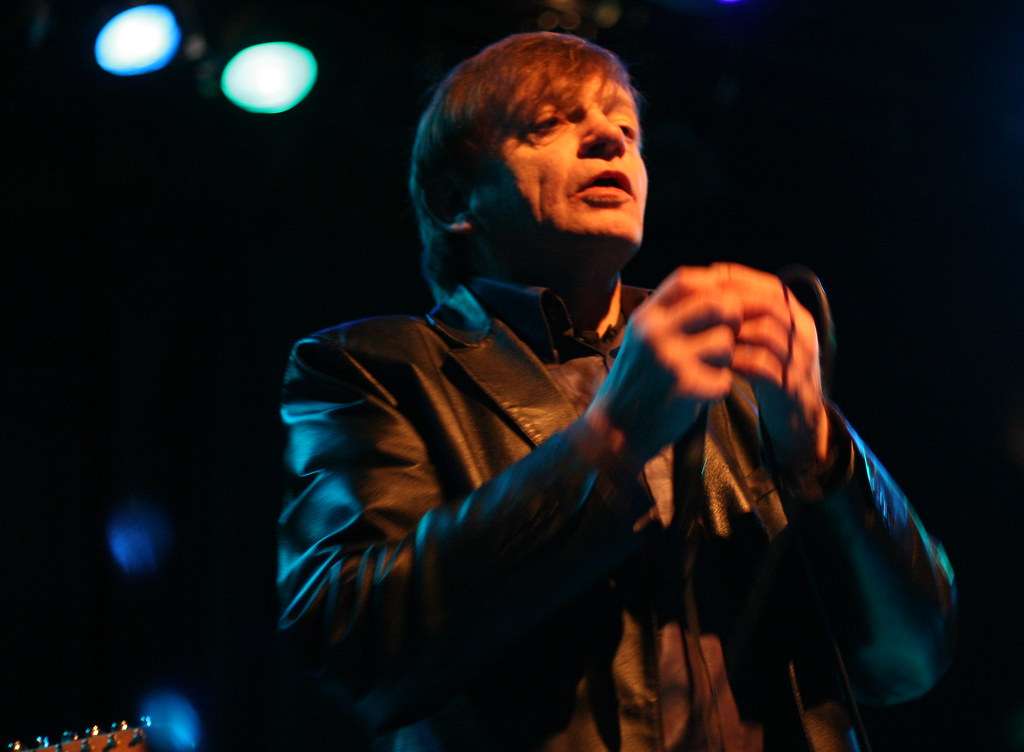 The Fall’s lineup changed constantly throughout its four decade lifespan but Mark E. Smith remained an unwavering fixture until his death in 2018. By all accounts an uncompromising and dedicated creative, Smith’s emotional distance from his bandmates and interminable suspicion surrounding anyone involved in the music industry turned the band into a beacon of misanthropy that was attractive to society’s outsiders and underdogs. His caustic lyrics exposed the id of an auto-didactic working man in Thatcher’s Britain – a sixteen year old who worked on Salford docks and took evening classes in A-level literature. The pictures he painted were rarely pretty yet always authentic and shrouded in a cloud of cryptic clues and references that heightened an era of disorientation and unrest. As we find ourselves in yet another period of upheaval, The Fall’s music has only grown more relatable. Smith will always remain a hard act to follow, but below are just some of the band’s who feel like spiritual successors…

Dogrel could have been recorded in any year since the late ‘70s, but its strong Irish identity and its ode to the city of Dublin help set Fontaines D.C. apart from the crowd. Inspired by other local groups such as Girl Band they have since become one of the fast-rising acts of the decade thanks to their celebrated debut, which confirmed the lyrical prowess of frontman Grian Chatten, whose deadpan delivery and poetic prose combine in captivating style. The rapid modernisation and growing inequality of their beloved hometown provokes a sincere and fervent response from Fontaines D.C. that pushes Dogrel into fascinating moments of love, joy, and misery.

Perhaps the most politically outspoken band in the current wave of British punk, IDLES have earned a cult following thanks to their hard-edged yet accessible blend of noise and pop. Frontman Joe Talbot brings his snarling charisma to bear on the audience, expressing righteous anger and drawing inspiration from the strength of his mother, for whom he cared before her death from a long-term illness. Joy As An Act Of Resistance deals with the societal turmoil of modern Britain, dissecting everything from Brexit to toxic masculinity with the characteristically high octane, yet surprisingly soulful, energy that fans have grown to love.

If you like your music as stripped back and raw as possible then you’re probably already aware of Sleaford Mods, who broke through with their celebrated 2014 album Divide & Exit. Sitting somewhere between John Cooper Clarke and Mark E. Smith, Jason Williamson’s social realist lyrics articulate his acerbic wit, and reveal an anger provoked by years of austerity politics which have disproportionately affected towns and cities in the north of England. As the title Eton Alive suggests, the band’s latest effort shows no sign of relent on their behalf.

slowthai – Nothing Great About Britain (2019)

The idea of what does and doesn’t constitute rap has been a liminal paradigm for decades, but the definition has rarely felt as open as it does right now. Slowthai’s music is particularly pertinent thanks to his novel fusion of post-punk, grime, and hiphop, which has resulted in a sound that spans several decades of Britain’s countercultural history. Whilst ‘Doorman’ will resonate with those that came of age in ‘80s, the rest of Nothing Great About Britain benefits from slowthai’s immersion in the current strains of UK rap – styles that the musician switches between with the impatience of a young provocateur keen to watch the old rules burn.

Few modern punk and post-punk bands reach the levels vibrancy and energy that seem to be hardwired in the Snapped Ankles sound. Despite the gruesome name, the band’s use of electronics to evoke a technicolour yet broken-down form of rock is endlessly fun and reminiscent of the likes of LCD Soundsystem, Hot Chip, and Talking Heads. The fact that the identity of each member has been left unclear speaks to an eagerness to avoid the usual band hierarchies that elevate the frontman or frontwoman above their collaborators, and chimes perfectly with the chaotic yet democratic nature of their music.