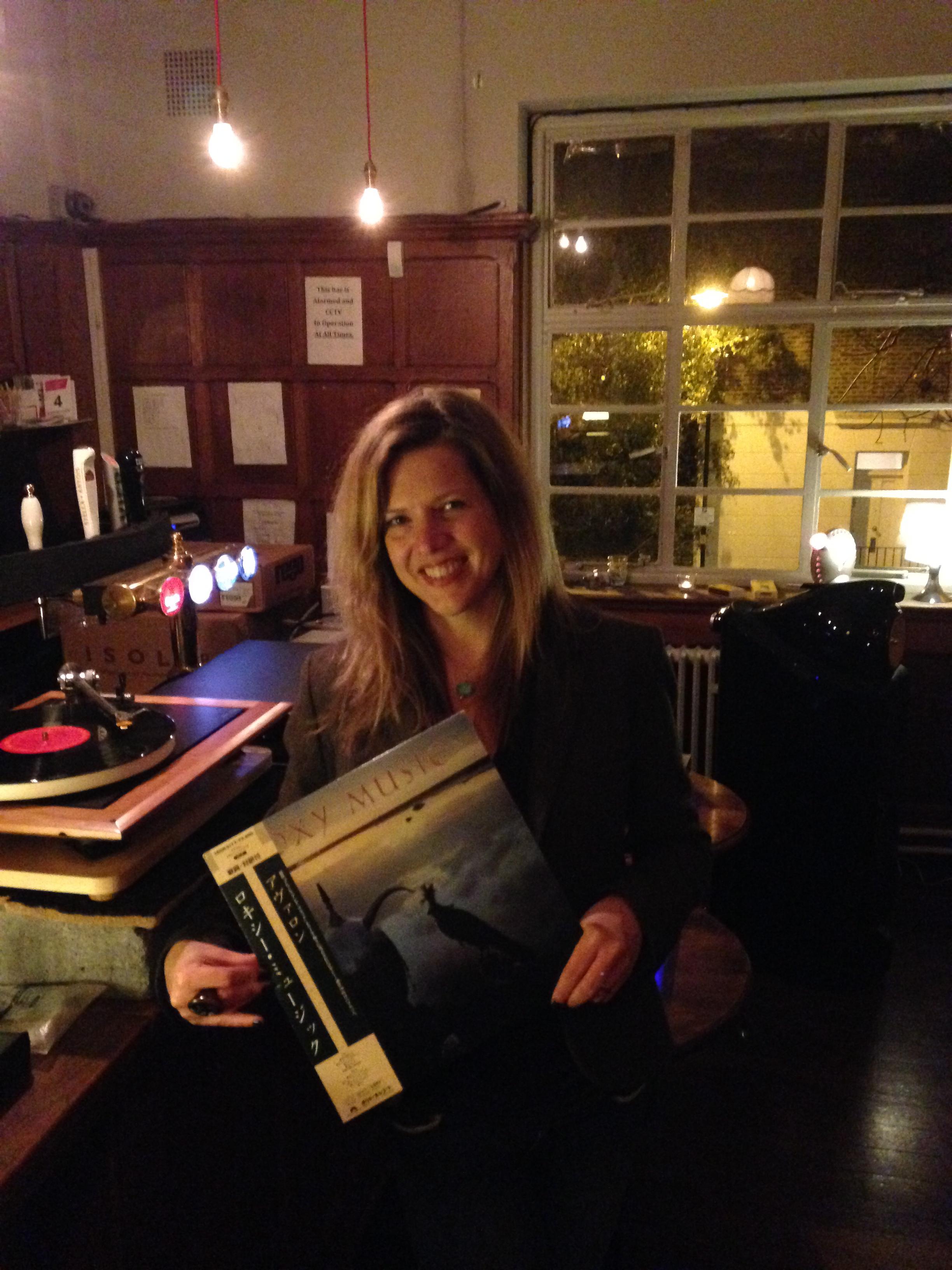 Roxy Music was undeniably one of the most influential and significant bands of the seventies and helped change the course of music. Even their own musical path did not take a straight course and their music is often viewed as having three distinct phases: The early Eno years (also including the tellingly-titled album ‘Stranded’ released after his departure) were the edgy years where they became the darlings of art-rock. In an interview with The Face in ’85, Ferry said of this first phase, “There was certainly a lot of fantasy and escape and dream about it. But I think the style aspect was over-exaggerated. It came to overshadow the content, when I wanted both to be equally important.”

During their next stage which included ‘Country Life’ and ‘Siren’ they were rejected by the punks who didn’t like Roxy’s glamorous jet-set image. Roxy called it quits in 1976 but regrouped two years later and released three album that had a slicker and sometimes more disco feel, a sound which culminated with their final studio album, ‘Avalon’.

Amazingly, the band’s entire discography was released within a decade and this included their nearly four year recording hiatus. With only eight studio albums under their cummerbund, Roxy Music managed to inspire a slew of successive acts including Duran Duran, Depeche Mode and Grace Jones. Their influence extensively stretched from punks like the Sex Pistols’ Steve Jones and Paul Cook to pop chanteuses like Annie Lennox.

Roxy’s presence can even be felt in American funk and disco (Nile Rodgers told Classic Album Sundays that he modeled Chic’s debut album cover on Roxy’s sexy imagery). Although Roxy showcased many musical facets and their first album has stylistic differences when compared to their last, it is not as if their sound abruptly transformed overnight.

I am not sure there is as clean a boundary between early and late Roxy as many would like to believe. Listening to their albums chronologically one can hear subtle sonic shifts and a broadening musical palette (as I write I am listening to Eddie Jobson’s country-sounding violin on ‘End of the Line” from ‘Siren’).

Roxy’s sound developed organically and one can hear their haunting melodic sensibility much lauded in their later years on early songs like ‘Strictly Confidential’. Likewise, the atmospheric soundscapes of the two instrumentals on their last album’s ‘India’ and ‘Tara’ would not sound out of place on one of Eno’s early solo albums such as ‘Another Green World’.

However, how they constructed their songs did suddenly change. Starting with their penultimate album ‘Flesh and Blood’, Roxy changed their approach in making music. As Phil Manzanera later told Rolling Stone, “If you want to come up with something new, you have to change your methods of working.”

Producer Rhett Davies was inspired by his work with Eno (he produced several of his albums including ‘Taking Tiger Mountain’ and ‘Another Green World’), and proposed that Roxy defer from traditional songwriting method. He suggested they build up the songs with Bryan laying down an idea on the keys and then backing it with the Linn drum machine. The musicians then jammed over this atmospheric groove with Bryan writing and laying down his vocals as the finishing touch.

They began to experiment, building the songs through improvisation and like Eno, they welcomed accidents that triggered new sounds and new ideas. They even began to use the studios as an instrument such as using the 75-foot stairwell in the Power Station studio as a reverb.

However, this improvisational method had its downfalls especially when it came time put on the finishing touch by laying down the vocals. Producer Rhett Davies told Sound on Sound, “We would cut a lot of stuff that never got used, a lot of trials that Bryan just couldn’t work into songs.”

‘Avalon’ has a much more sophisticated, lush and textural sound when compared to their early material and almost has a more cinematic feel and is more of a grower. Sonically there is much more space allowing Manzanera’s understated guitar and Ferry’s sparse keyboard lines and chords to breathe. Bryan Ferry’s lyrics and delivery are much dreamier and dare we say it, more mature (I will refrain from saying more ‘adult’). The fact that they refused to kowtow to a younger audience and were confident to reflect where they actually were in life is to their advantage. It lends the album a timeless quality that only gets better with age.

I discovered Roxy Music as a teenager while working in a record shop. One of my co-workers continually raved about the band so I picked up a copy of their latest album (and to date the band’s last studio effort) ‘Avalon’. I must admit, the music did not immediately capture me but with repeated listens, it grew on me until I became hooked – big time.

I was already a Brian Eno fan but at the time, I was unaware of Eno’s presence in the early years of the band and this nugget of knowledge was a welcome discovery when I began buying the entire Roxy catalogue.

Although I am equally a fan of Roxy’s early art-rock years (with a predilection for ‘For Your Pleasure’), ‘Avalon’ remains my favourite album from their latter stage. I spent countless hours in my bedroom listening to the lush arrangements and the subtle funk of the instrumentation accompanied by the beguiling, sultry sounds of Bryan Ferry’s voice (okay, I developed a massive crush on Ferry and soon had a huge promo poster of ‘Boys and Girls’ hanging on the ceiling over my bed). ‘Avalon’ made me long for a life that I did not have, one that was far away, European, and much removed from my American small-town suburban teenage life (‘More Than This’?).

This album is sexy-as-hell and I have nearly always listened to it beginning to end as it flows as one piece. However, if I had to pick a tune that represents the album as a whole, it would be ‘The Main Thing’ as it is one of the finest examples of their swansong studio album sound: sophisticated, brilliantly recorded, sparsely arranged cinematic dance music.

‘The Main Thing’ is shows off their improvisational technique as a third of the song is instrumental and the lyrics almost sound like an afterthought, conjuring mood and emotion rather than dictating a theme. Most of the song revolves around Bryan’s keyboards, bubbling and percolating on the bottom with eerie and understated lines embellishing the vocal breaks. Manzanera’s cutting guitar and Mackay’s sax are similarly held back, augmenting and creating texture in the lengthy, haunting instrumental break.

For myself, the defining feature of the song is the drums and percussion, starting with the marching, crunching clap of the intro. The percussion is glassy and crystalline, panning from left to right, and the snare sharp and reverberant. One can hear the space and the room sound as most of the drums and percussion were recorded in that 75-foot stairwell. The results are glorious.

In terms of lyrics, Ferry’s songwriting for the band’s final studio effort marks one of his highpoints as a writer and the lyrics feel more personal, romantic, open and vulnerable. Manzanera told Rolling Stone, “I think Bryan decided he wanted a more adult type of lyric. We were making music that was a bit rockier, but then we decided — in light of the way Bryan was thinking lyrically — that we should tone it down, so it ended up having a more constant sort of mood. And although that mood wasn’t very up and rocky, it was positive…It was just before he got married. It was a period when he was searching…”

Ferry married Lucy Helmore a month after the album release and it is her figure wearing the helmet that graces the Peter Saville designed front cover.

However, the band members were becoming less enamoured with one another and there was a bit too much friction in the studio. As Ferry told The Face in 1985, “Before I did ‘Avalon’ and while I was doing it, it felt to me that is had gone as far as it could go. It was no longer useful or stimulating to have that kind of friction.”

Manzanera also remembered the charged when speaking with Rolling Stone: “Roxy Music was a series of complex personalities, and inevitably there would be ups and downs. Any sort of creative force that’s worth its while has to exist in a sort of state of conflict. So it’s absolutely amazing that we managed to do seven or eight albums.”

The band since collaborated on Bryan Ferry’s solo albums and ‘Boys and Girls’ certainly sounds like a natural follow-up to ‘Avalon’. The three remaining members have also performed together numerous times yet they have never made another Roxy Music studio album. Instead, we are left with a mood conjuring swansong that draws feelings of longing and romanticism.

And Andy Mackay’s wistful oboe on ‘Tara’ is aptly elegiac for the band’s closing song on their final album and “Avalon” as a whole is a graceful bow out of Roxy’s era of record making.