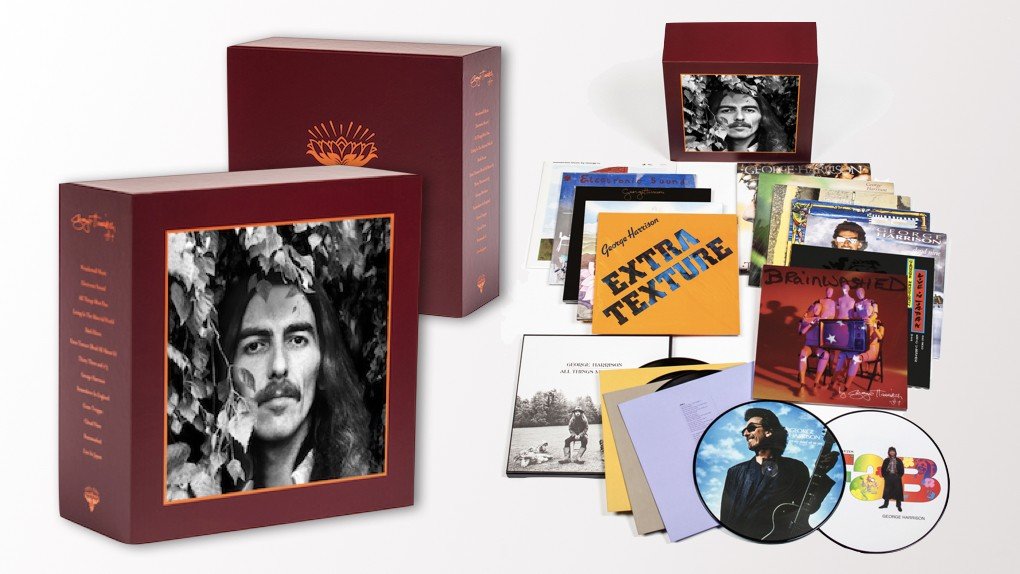 There’s no doubt that the highest-profile reissue of this month comes from the Harrison Estate, who on January 17 announced a fully authorised and expansive box set reissue of George Harrison’s entire discography. The bumper collection, which kicks off in 1968 with the experimental Wonderwall Music and ends with 2002’s Brainwashed, chronicles ‘The Quiet One’s’ three-decade-plus solo career following the dissolution of The Beatles in 1970.

The box set follows a wave of new Beatles memorabilia, including Pro-Ject’s Fab Four themed turntables, and arrives alongside a full-colour reissue of Harrison’s autobiographical lyric and photo book, I, Me, Mine, landing on the same day. Surely of greater excitement to fans, however, this reissue of Harrison’s back catalogue marks an important event in any die-hard’s calendar. Featuring exact replicas of Harrison’s 12 studio albums, including the critically acclaimed triple LP All Things Must Pass, the collection also boasts two picture disc 12” singles (1987’s ‘Got My Mind Set on You’ and ‘When We Was Fab’) which maintain original image designs, and an additional double LP recording of his 1992 set Live in Japan. Utilising the original analogue master tapes, the collection has also been fully remastered and cut a Capitol studios, which should ensure the audio matches the aesthetic standard set by the box set’s sturdy and intricate design.

Released on February 24th, this reissue looks set to finally fill the gaps in fans collection’s.


2. The Other People Place – Lifestyles of the Laptop Cafe

For any electronic music fan there’s only really one reissue that matters this month: the long overdue and highly anticipated re-press of Warp’s 2001 Electro classic Lifestyles of the Laptop Cafe, arriving on February 10th. Written and produced by the late James Stinson (one-half of pioneering Detroit duo Drexciya), the LP marks a particular high point in the career of an artist who has left a truly indelible mark on dance music culture. Mixing libidinal yet motorik rhythms with stark, androgynous vocals, it’s slowly but surely elevated itself to cult status – an album which stands out even amongst Warp’s esteemed and expansive catalogue.

This rare LP has remained an elusive prize for many dance music collectors, pushing prices up to eye watering levels over the last decade and prompting increasingly urgent calls for a reissue amongst fans. 15 years after it’s original release, and Warp have finally succumbed to the pressure, and following a petition which received thousands of signatures, it’s a victory over the extortionate rates of second-hand sellers and a firm re-appraisal of Stinson’s immeasurable contribution to electronic music. As such, the artwork remains satisfyingly true to it’s origins and pressing quality deservedly impressive.

Another product of Warp’s increasingly reminiscent mood (which has seen reissues of Autechre and Boards of Canada in recent years), this is surely an exciting period for fans of the seminal electronic label, and a prime opportunity for a new generation to dig deep into it’s past.

Jammy is perhaps best known for producing Wayne Smith’s ‘Under Me Sleng Teng’, the first ever fully digital dancehall track, and a production which has steadily gained notoriety as one of the most sampled songs of all time, thanks in no small part to the UK’s Hardcore Continuum of dance mutations. And whilst ‘Sleng Teng’ isn’t included here, plenty of heavy hitters remain in it’s wake, including stellar cuts from Dennis Brown, Junior Murvin, and Chaka Demus, in addition to several appearances from the aforementioned Smith. Surveying this track list alone, It’s easy to see why Jammy’s sound-system continued to dominate throughout the remainder of the 20th century.

Produced by Lloyd James and King Jammy himself, this burgeoning series looks set to offer a fascinating insight into a period of technological, musical and cultural transition, within a scene characterised by fierce rivalry and close-knit companionship. Keep an eye out for more to come…

Legendary saxophonist and composer Ornette Coleman sadly departed in June 2015, yet his memory remains truly alive. As such, Song X records (managed by Coleman’s son, Denardo) have assembled a fitting tribute in the form of Celebrate Ornette, an expansive multimedia package which documents both a star-studded 2014 tribute concert held in Brooklyn’s Prospect Park and a 2015 memorial service held at Riverside Church in wake of his passing.

Pressed across 4 180 gram LPs, the collection presents the final public performance of the “free jazz” progenitor himself, alongside a vast array of industry admirers; the Brooklyn celebration featured appearances from Patti Smith, Laurie Anderson, Thurston Moore, and Ravi Coltrane amongst many others, and evidences the manner in which Coleman’s idiosyncratic influence transcends the boundaries of genre, gender and race. Similarly, Pharaoh Sanders moving contribution to the pioneer’s 2015 memorial service demonstrates a sincere reverence amongst Coleman’s talented contemporaries.

In addition to these lovingly packaged recordings, the collection also bundles an array of written tributes, backstage interviews, and 2 DVD’s, ensuring every angle is covered with the attention it deserves. And whilst this set may not be best starting for newcomers, for dedicated fans this will surely be an irresistible, if expensive, package to complete your collection.

By now the Minimal Wave imprint should be firmly placed on any retro-obsessive’s radar. Since it’s inception in 2005, Veronica Vasicka’s esteemed label has unearthed and polished the forgotten sounds of the ‘80s cold wave and synth wave movements, shining a light on some incredible material and rectifying the past to assert new classics in the process.

Another long awaited repress arrives this month in the form of Decadence, a ten-track compilation of tracks by Deux originally compiled in 2010. Gathering together obscure tape releases and limited 12” singles which range from 1983-1992, the LP charts a definitive run-down of the Lyon duo’s best bits, including the criminally overlooked ‘Game And Performance’, which, in alternate universe, would have been a mega-hit.

Channelling the chilled song-craft of Serge Gainsbourg, refracted through slick machines and an inherent French sexuality, these irresistibly chic compositions are captivatingly smooth and infectiously effervescent, masterfully treading the line between charm and cheese. The male-to-female call and response rallied here between Cati Tete and the late Gérard Pelletier remains an intensely lovable spectre of faded youth, almost haunting in it’s naive sincerity.

Hand-stamped and pressed to 180-gram vinyl, alongside two portrait prints, this one won’t hang around for long…

How To Improve Your Streaming System – Jason Kennedy (The Ear)