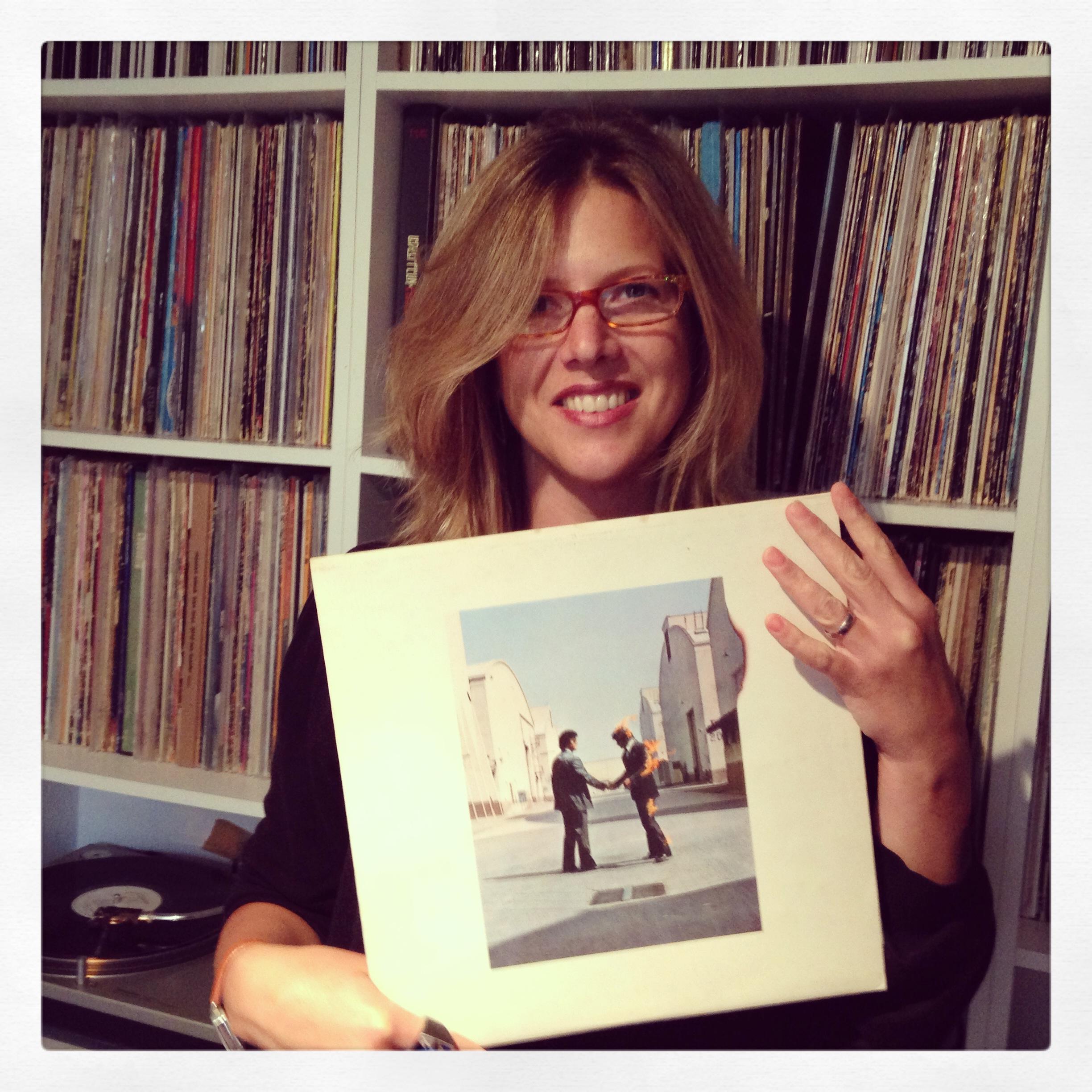 The story of “Wish You Were Here” really starts with the staggering and stupendous success of Pink Floyd’s previous album “The Dark Side Of The Moon” which had already become one of the most significant and popular albums of all time, staying on the charts for 741 weeks (or 14 years). The commercial success of the album was completely unanticipated and affected the band in both a positive and negative manner.

In Roger Waters words, “It was the end. We’d reached the point we’d been aiming for since teenagers. There was really nothing more to do.”

The band were putting pressure upon themselves to come up with another album, but how could they expect that their next effort would reach the dizzying heights of their Dark Side blockbuster? It was a daunting task and as David Gilmour said, “the success of dark side of the moon scared us. You do start thinking was that a fluke? Is that it for us? Are we done?”

They went back to a project called “household objects” which was the band’s attempt at creating music on household objects such as rubber bands and old hand mixers. They filled wine glasses with varying amounts of liquid, circled the rim and recorded the sounds which they later used to build an opening chord on “Shine On”. However, overall, the sessions construed what Mason later referred to as a “delaying tactic” and the idea was abandoned.

Although they didn’t have a deadline to produce a new album, the did have a tour looming in the near future and they wanted to debut a few new tunes. They booked themselves into a dark and depressing studio near Kings Cross, bounced some ideas of one another and came up with three new songs “Raving and Drooling”, “You Gotta Be Crazy” and “Shine On You Crazy Diamond”.

The band gigged throughout most of 1974 and were presented with a host of new problems. Their French tour was marred by an old ad campaign the band had agreed to do with the Gini bitter lemon drink. Before their huge success, they had appeared in a Gini ad and the agreement included that they would display branding on their next tour. The accompanying posse of placard waving models seriously dented the band’s credibility.

The UK stint didn’t fare too well either. The band had acquired a new mixing desk which wasn’t working properly, their film projections could be a bit temperamental and Gilmour was having problems remembering the lengthy lyrics of new song “Raving and Drooling” and much to the delight of a Melody Maker journalist, had them stuck on the top of his guitar.

But this was nothing compared to the review of the November 74 show at Wembley’s Empire Pool that Nick Kent gave them in NME. Kent looked back to that review saying “’indolent musical deadwood’ was one of the more fanciful phrases i used to describe their new music; ‘facile and soulless’ another. I rubbished the Waters-Mason musical axis as ‘rock’s dullest ever rhythm section’ and even went so far as to take David Gilmour to task for not using more hair-care products on his lanky locks.”

This cynical review certainly did not enhance the mood of the band when they entered Abbey Road studios in January 1975.

They had asked Alan Parsons, the engineer of “Dark Side” to return to the studio with them, but he declined as he had formed his own act, The Alan Parsons Project. So they got Brian Humphries who had worked with them on the “More” soundtrack in 1969. He was burdened with the task of trying to figure out Abbey Roads brand new 24 track mixing desk (they had used a 16 track on dark side).

Things weren’t going too smoothly regarding the songwriting either. The band were collectively suffering from a lack of creative inspiration as they were physically and mentally drained from their success and their personal lives, including marriages, were suffering.

Nick Mason recalled, “We were in this place where nothing would get done. And you could be there from midday until midnight, but we didn’t seem to have any clear idea of what we were doing. I had this feeling of ennui – which i suspect was share by all of us – because things weren’t happening.”

Waters had emerged as the album conceptualist and lyricist and he was drawing a blank and he later called the sessions “laborious and tortured”. However, he kept coming back to the “Shine On You Crazy Diamond” song and on the last few dates of their tour, he had dedicated “Shine On” to former Pink Floyd leader and founder Syd Barrett.

Syd Barrett had been a childhood friend of Waters and the musical genius behind Pink Floyd’s first single “See Emily Play” and their first album “The Piper At The Gates Of Dawn”. By their following album “Saucerful Of Secrets” Barrett was becoming increasingly mentally unstable due to his heavy use of LSD. He subsequently left the band, or was kicked out – that is still up for conjecture – and replaced by another childhood friend, guitarist David Gilmour.

Barrett had left big shoes to fill as not only was he the primary songwriter who gave musical direction to the band, but he was also something of a cult figure and a centrepiece to the London scene and the popular UFO club. Gilmour felt a shadow hanging over him as he was “nervous about people saying i was a pale imitation of Syd.”

However, by 1975 and having had their own success without Barrett, the band had relaxed about the comparison and as Gilmour said, “I think our love and respect for Syd outweighed any desire to be free of the demon of Syd.”

Waters had decided that the album should reflect what was and wasn’t going on in the group and used “Shine On” as the springboard. He suggested they get rid and “Raving and Drooling” and “Gotta Be Crazy”, reworked renamed versions of which appeared on their next album “Animals” and then suggested they bridge the first and second halves of “Shine On” with new material that related to the band’s emotional state.

Storm Thorgerson, the album artwork designer and unofficial fifth member of the band who had toured with them the previous year said, “The magic word was absence. An absence of Syd, an absence of wives – as i think some of the band were getting divorced – and to some extent, an absence of commitment from the band themselves.”

The band had become increasingly disgusted with the phony attitudes and operations of the music business of which waters wrote two songs, “Welcome To The Machine” and “Have A Cigar”.  Waters cleverly wove their cynical attitude towards the biz in with the overall theme as he said, “”Welcome To The Machine” and “Have A Cigar” were barely-veiled attacks on the music business, their lyrics working neatly with “Shine On” to provide an apt summary of the rise and fall of Barrett; because i wanted to get as close as possible to what i felt … That sort of indefinable, inevitable melancholy about the disappearance of Syd.”

Waters struggled performing the vocals to “Shine On” and when it came time to record the vocals for “Have A Cigar” he didn’t feel up to the task. Gilmour also had a go but didn’t feel it was right for his voice. So they brought in Roy Harper for the duty.

Folk-rock singer songwriter Harper was a legendary figure in London at the time. Led Zeppelin had written a tribute to him “Hats Off To Roy Harper” on Led Zep “Three” and Jimmy Page had performed on Harper’s most significant album “Stormcock” of which The Smiths Johnny Marr has said is like “Hunky Dory’s big badder brother.”

Harper was recording in one of Abbey Road’s other studios at the time and Gilmour had already performed a few uncredited guitar licks on his record so the exchange seemed fair and he sounds convincing as the record label weasel when he sings “the band is just fantastic, that is really what i think, oh by the way, which one’s Pink”.

The song and album took shape and after a few short tours interspersed throughout their recording, the band were ready to mix. On the 5th of June, during the final session they were wrapping up the mix of “Shine On” and an unexpected and uninvited visitor appeared in the studio. He was overweight and had a shaved head and eyebrows.

Nobody knew who he was at first and were horrified to discover it was their friend and former bandmate Syd Barrett. The band members have never really agreed on the accounts of this visit but Thorgerson remembered, “two or three people cried. He sat round and talked for a bit, but he wasn’t really there.” This was the last time any of the band members would see him until his death in 2006.

Thorgerson’s artwork had become almost as integral part of the band’s conceptual nature as the music. He based his design on what he considered the lyrical theme: “unfulfilled presence”. He was inspired by Roxy Music’s “Country Life” album which was sold in an opaque green cellophane sleeve, censoring the image of the scantily clad models on the front cover. Thorgerson co-opted this idea using a black opaque sleeve to make the artwork absent.

The cover image is thorgerson’s visual representation of the band’s disdain of music biz players and plays with the idea of “getting burned”. They hired two stuntmen and photographed the session at the Warner Brothers film studio set and at one point, the wind was blowing in the wrong direction and started to burn one of the stuntmen’s mustache.

Upon release, “Wish You Were Here” went straight to number one and the record label couldn’t print enough copies to satisfy the demand. It was an instant success and has sold over 13 million copies.

It is considered a rock symphony and the interrelated musical and thematic motifs helped advance Pink Floyd’s status as the kings of the concept album.

The album has also remained a favourite of the bands as keyboardist Richard Wright said, “It’s an album I can listen to for pleasure, and there aren’t many Floyd albums that I can.”

Gilmour also cites it as his favourite saying “the end result of all that, whatever it was, definitely has left me an album i can live with very very happily. I like it very much.”

Many fans agree and “Wish You Were Here” with time has become one of the most important works of the Pink Floyd cannon with many believing it is their best. Now we can judge for ourselves.