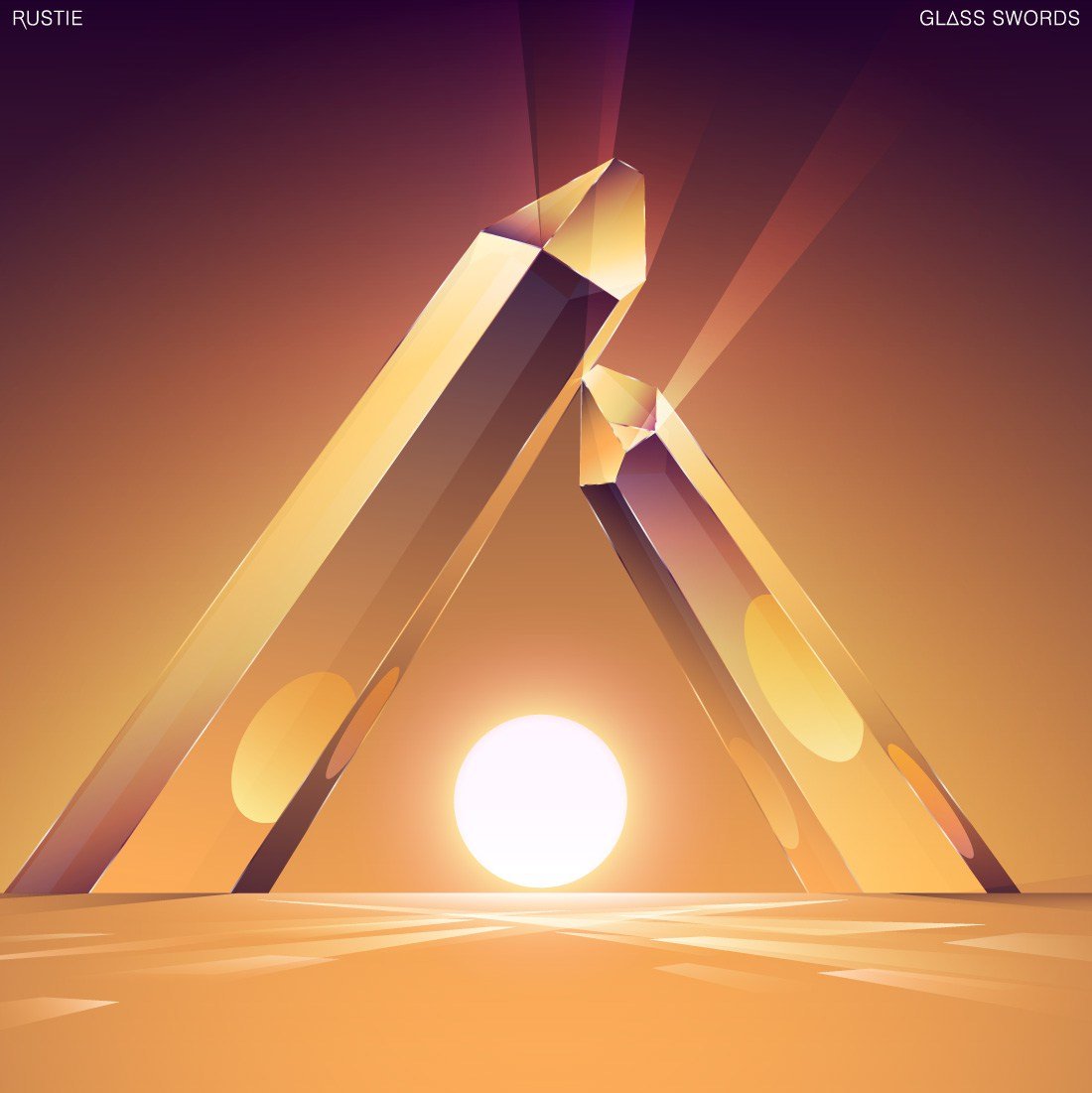 Like a serotonin rush igniting the body, Rustie’s Glass Swords hits hard and fast. As if channelling the inflated energy of a hyperactive child, Glaswegian producer Russell Whyte weaves a patchwork of crystalline textures as beautiful as they are bludgeoning; resurrecting a maximalist sentiment abandoned in the corporatised haze of the late 90’s Trance scene. Through its nerdy retreat into a glossy world of video games and fizzy drinks, this triumphant debut warps the neglected ingredients of euro-trance cheese into a brutal and chaotic stew of melodic, rhythmic and textural wonder – a sensory onslaught of cavernously turbulent percussion, delectably greasy bass lines, and retina-stretching synth swells.  Euphoria is served in relentless portions here – the acid-house dream is alive and well.

As a child of ‘80s, Whyte’s history with music intertwines disparate and bold influences – from his idolisation of Michael Jackson, to the early musical diet of acid-rock – channelled through the Beatles and Hendrix, and absorbed through his parents record collections. Similarly, upon reflection his tastes seem to lunge erratically, reflecting the crisis and consolidation of adolescence – most notably his transition from early school-choir innocence to the murky grunge of Nirvana (the primary impetus behind his desire to learn guitar).

By the time Whyte began testing the waters of music production – his interest sparked by a brother’s brief flirtation with the Fruity Loops beat-construction software – he was in his early 20’s, inaugurating himself into Glasgow’s nebulous hip hop and rave scenes, catalysed by the likes of Numbers (a party organisation and record label based locally). As a result, it’s hard to imagine Rustie’s music forming anywhere but the rainy and rowdy northern city – where enforced 3AM club license curfews incite a “go hard or go home” attitude of sweaty abandon, stretched and satiated by energetic D.I.Y afterparties.

And so it’s appropriate then, that, in a stark contrast to his quiet temperament, Whyte’s not one to shy away from the divisive brutalism in his music: listening for the first time you’re as likely to experience a migraine as you are an arousal. As if attacking techno’s devotion to analogue hardware, Rustie’s compositions are almost defiantly digital; densely compressed sonic torrents are driven to near breaking points, as garish frequencies are heightened with a sadistically pin-pointed accuracy. Whilst obsessively euphoric, this LP commands endurance and stamina from the listener – the urgent energy channelled in tracks like ‘Death Mountain’seems capable of squeezing time itself; several hours of raving are compacted into mere minutes of sticky, hyperactive commotion.

In this sense, Glass Swords is a challenging yet rewarding exploration of artificial aesthetics – a juvenile eruption drawn from the bitter-sweet nostalgia of a youth nourished by video games. These pixellated portals to alternate realities have not only defined Whyte’s childhood years (he frequently cites the Legend of Zelda games as major touchstones), but have helped foster his entire approach to musical composition; his work glistens with an 8-Bit charm, polished and upscaled for the HD generation.

The vivid ferocity of these synthetic textures are plundered, then moulded into both rigid and free flowing forms of dance, hip-hop and ‘80s inspired synth-pop. Tumbling glacial patterns hover in zero-gravity atmospheres, whilst sentimental melodies tug at your emotions with an almost festive warmth. It’s not hard to imagine tracks like ‘Ice Tunnels’, or the Daft Punk inspired ‘Globes’ soundtracking the saccharine Christmas adverts engineered to spur merriment.

Combatting the notion that digital synthesis is inherently cold, Rustie wraps these fluorescent materials in warm layers of saturation, vinyl crackle, and overdriven noise; the resulting glow submerges the listener in a sentimental yet hi-def environment, as synthetic plastics become excitable sentients animated beyond the composers control. A master of overblown sound sculpture, Whyte establishes a convincing, yet fantastical world, entirely independent from our own – an introspective rejection of reality which encapsulates the liberating escapism of dance music en masse.

Perhaps integral to the album’s success, however, is its deftly crafted percussion. Through an attuned rhythmic sensibility and an ‘80s inspired hyperbolic attitude, these jarringly fabricated textures are wrangled into gnarly, weaponised bangers of sheer force – vigorously amplified by a cacophony of kitchen-sink clatter. On the Zelda-sampling ‘Hover Traps’, slippery hollowed snaps swarm around a chunky bass line like ravenous mosquitos, before an ecstatic chord sequence drills into your central nervous system through a blitzkrieg of stadium-sized snare drums.

Similarly, on the swaggering ‘City Star’ a fantastical David Wise-inspired synth-scape descends into a bustling chaos of serrated hi-hats and guttural kick drums, convalescing precariously to form a sensational melting of rhythm and texture – slippery and sodden like the streets of his hometown. In an inspired contradiction to the cyberdelic haze of synthesis, the rhythm sections here feel earthy and gritty, snatched from real, tangible objects you can pound and shake; the monstrous fills in ‘After Light’ slap with such a force you can sense your eardrums concaving in a synaesthetic mess. If it weren’t for the infectious funk and rhythmic intricacies carved out by these dense percussive arrangements, much of Glass Swords would collapse under it’s own lustrous weight. Drums lay out a human interface for the alien world, pushing and pulling the body with an erratic and tactile velocity.

Falling ambiguously somewhere in the contentiously named (and short-lived) “Wonky” sub-genre, alongside fellow Scots like Hudson Mohawke and the LuckyMe label, Rustie’s music belonged to a scene of loosely associated beat-smiths who took thrill in the lopsided subversiveness of the “distasteful”. From glitchy soundbites, to sleazy, plasticine-mould hip-hop, to melodramatic trance stabs – with clear influences ranging from hip-hop deconstructionists like The Neptunes, to the child-like regressiveness of the mid 90’s Happy Hardcore scene, it’s a sound no doubt enlivened by the communal spirit of the Glasgow DJ circuit and the city’s notoriously buoyant crowds.

Owing much to this community of misfits, Whyte’s brazen disregard for the cult of cool is utterly refreshing in the current grey-scale climate of musical aestheticism; upon the LP’s release in 2011, these cartoonish melodies and gaudy textures certainly weren’t in vogue amidst the austere post-dubstep dance underground. It’s a testament to Warp Records (a label prominently associated with the post-rave “progressiveness” of Autechre and Apex Twin), whose ever-diversifying tastes have enabled outsider approaches (most recently from the likes of Lorenzo Senni and Gaika) to surface on a world renowned platform. Similarly, Rustie’s unwillingness to slot comfortably within a focused trend or a label’s identity is both inspirational and enviable in the current climate of musical saturation.

Importantly, Glass Swords’ greatest virtue lies in it’s democratic approach to electronic music. Little initiation or generic experience is required for enjoyment here; in some strange paradox, through this maximalist pop-oriented approach Whyte manages to strip dance music down to it’s instantly gratifying essence – an accessible, interactive sound-scape of primordial instinct and inclusivity. Whilst pleasingly detailed and groove-oriented, there’s a beautiful simplicity in the abandon of “progressive” discernment here – like the sonic equivalent to a hollywood blockbuster; joy emerges from a primal awe, inspired by sheer sonic spectacle.

Electronic dance music, in all it’s myriads of complexities and subdivisions, is often painfully self-aware. As the stylistic umbrella grows heavy under the relentless stream of time it’s an inevitable side-effect, perhaps most visible in the rock and hip-hop genres; referentiality, tradition, and irony surface insidiously, whilst overwrought concepts threaten to extinguish the spark of a genre established on impeccably simple ideals.

Glass Swords wriggles free of these constraints, engaging with both sound and audience on an exhilaratingly honest level – it revels in the absurdity of the synthetic and the majesty of the maligned. Rustie’s music preaches a shameless confidence in your own creations – a return to the care-free enthusiasm of your childhood; a stubborn re-assertion of youthful vitality, and a generous enabler of wide-eyed fascination.

Few albums can reverse the ageing process; Glass Swords just might be one of them.