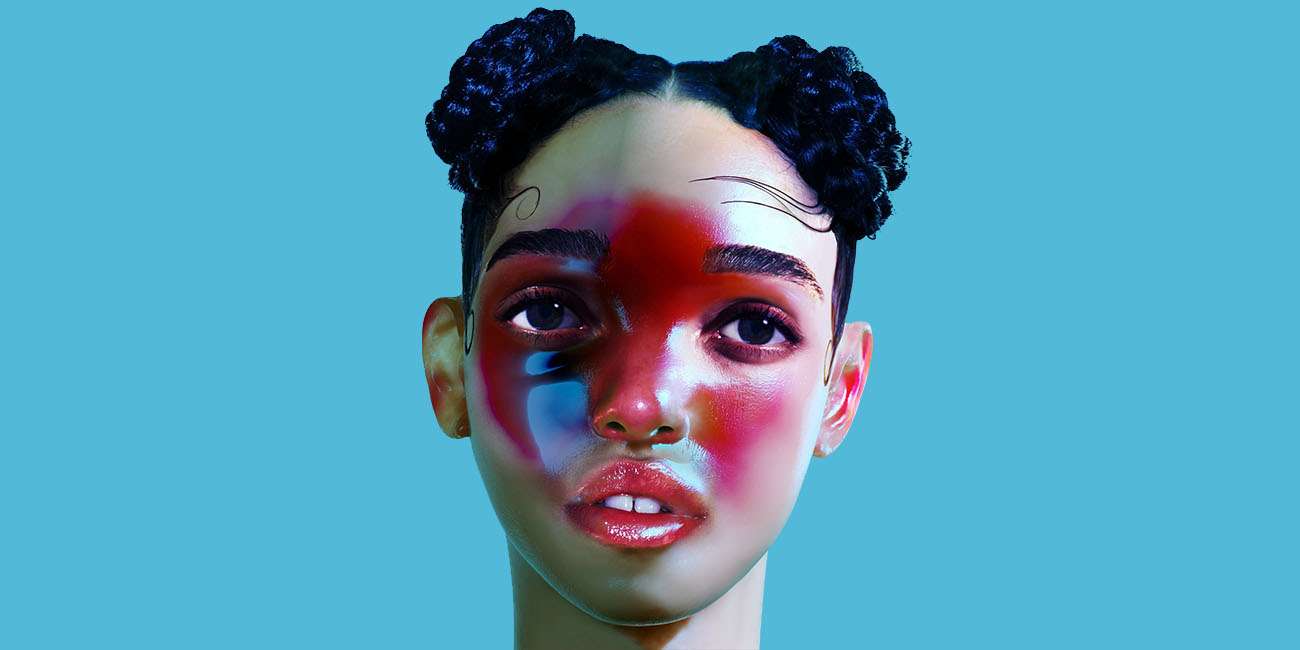 It’s hard to recall a time when music’s visual counterpart was as important as it is now. For the pop artist it’s no longer adequate to have a few decent press shots and a handful of eye-catching videos – an aesthetic vision, encompassing fashion, makeup, photography and choreography, must entice and intrigue through platforms as ethereal as Instagram and Snapchat, wrestling momentary interest from the depths of distraction. The artist who thrives in this era carries off the multimedia identity with naturalistic ease, pirouetting in the hall of mirrors whilst the audience looks on in disbelief. More so, this artist justifies the colourful theatrics with music that is every bit as tantalising as its creator.

FKA Twigs is the new archetype of this principle. Since the release of her earliest material in 2012, Tahliah Barnett has engaged with her audience in an oblique yet captivating manner. Her very first projects, EP1 and EP2, presented a mutant hybrid of pop and abstract club sounds, composed with whispered vocals, atmospheric synthesisers, and serpentine arrangements. These songs drew inspiration from the likes of Tricky, Massive Attack, Portishead, and DJ Shadow, channeling their moody, noir overtones into something new, distorted and unapologetically feminine. Each song was accompanied by a video offering uncanny and radical interpretations of the music: flower-covered genitals; metronomically shifting skulls; bodies deflating like balloons.

Barnett was already appearing on magazine covers, her haunting, graceful features adorned with outsized jewellery and accentuated by vibrant makeup palettes. Like Bowie and Bush before her, Twigs’ visual identity is the material extension of her music – elegant, curved edges manifested physically in the impossible curls of her hair and the sleek surface of her skin. Barnett came of age in the world of performance and dance, and had seemingly internalised the poise and precision necessary to elevate herself over others in the audition room. Her success had been hard won, and it was after performing in music videos for the likes of Ed Sheeran, Kylie Minogue, and Jessie J that she began working with producers in London to realise her own sonic identity.

Released in 2014, LP1 proved just how quickly Barnett had developed her distinctive yet indefinable recording personality. Jesse Kanda’s hyper-real artwork depicts Twigs as a woman stuck halfway between reality and fantasy, struggling to liberate herself from the boundaries of the human body. The album introduced a more structured approach to her experimental impulses, retaining the dark sensuality of songs such as ‘Weak Spot’ but packaging it in a way that would appeal to an even greater audience. Her visual identity was now cinematically high-definition yet the music remained intangible in all the right ways.

The inherent tension suffusing the album arises from the dynamic between Barnett’s vocals and their alienating backdrop. Her voice evokes the fragility of a glass sculpture, exhaling cool airy tones that draw from some elemental wellspring of sound way up in the mountains. Under any other circumstance Twigs’ voice could carry a song entirely a cappella, drawing in listeners like nocturnal fauna to a flame. But here it’s the incredible contrast between the delicacy of her vocal talent and the often brutal power of Barnett’s mostly self-produced music. On ‘Pendulum’ she declares herself “a sweet, little love maker” atop production that seems intent on disorientation – all arrhythmic percussion, gut-punching bass, and whispered screams. The album’s biggest radio hit ‘Two Weeks’ juxtaposes Barnett’s crystalline voice with layers of synthetic texture and barrages of percussion drawn from the palette of modern hiphop. The resulting cognitive dissonance is beautifully disturbing.

Read: The Legacy Of Björk in Five Records

Many have attempted to pigeonhole Barnett’s music as some kind of hi-tech r’n’b, but this label becomes increasingly reductive the longer you listen. Amongst the complex web of influences, including abstract hiphop producer Arca, ‘80s pop prodigy Kate Bush, and the gothic pop of The XX, choral music dictates a great deal of her artistic choices. This is particularly pronounced on tracks such as ‘Preface’ and ‘Closer’, both of which operate with a near hymnal sense of melody and rhythm whilst using the spatialised potential of reverb and echo to bathe the listener in sound. Barnett has been vocal about the way in which her mixed-race heritage shapes the public perception of her as a performer: “If I was white and blonde and said I went to church all the time, you’d be talking about the ‘choral aspect’. But you’re not talking about that because I’m a mixed-race girl from south London.”

FKA Twigs’ music is strangely timeless, yet in many ways she is an artist who could only exist in our current era. Playlist culture and the intensified focus on cross-platform, multi-media work have rendered many of the old genre distinctions irrelevant, and for many marginalised and restricted artists this is a liberating prospect. Despite not being anchored to a familiar scene or style Barnett has built her sonic world from the ground-up, using the building blocks of her own interests, passions, and impulses to create music that is often breathtakingly original. LP1 has its sharp, jagged edges, but it also holds a warmth that is undoubtedly familiar and ultimately, undeniably human.