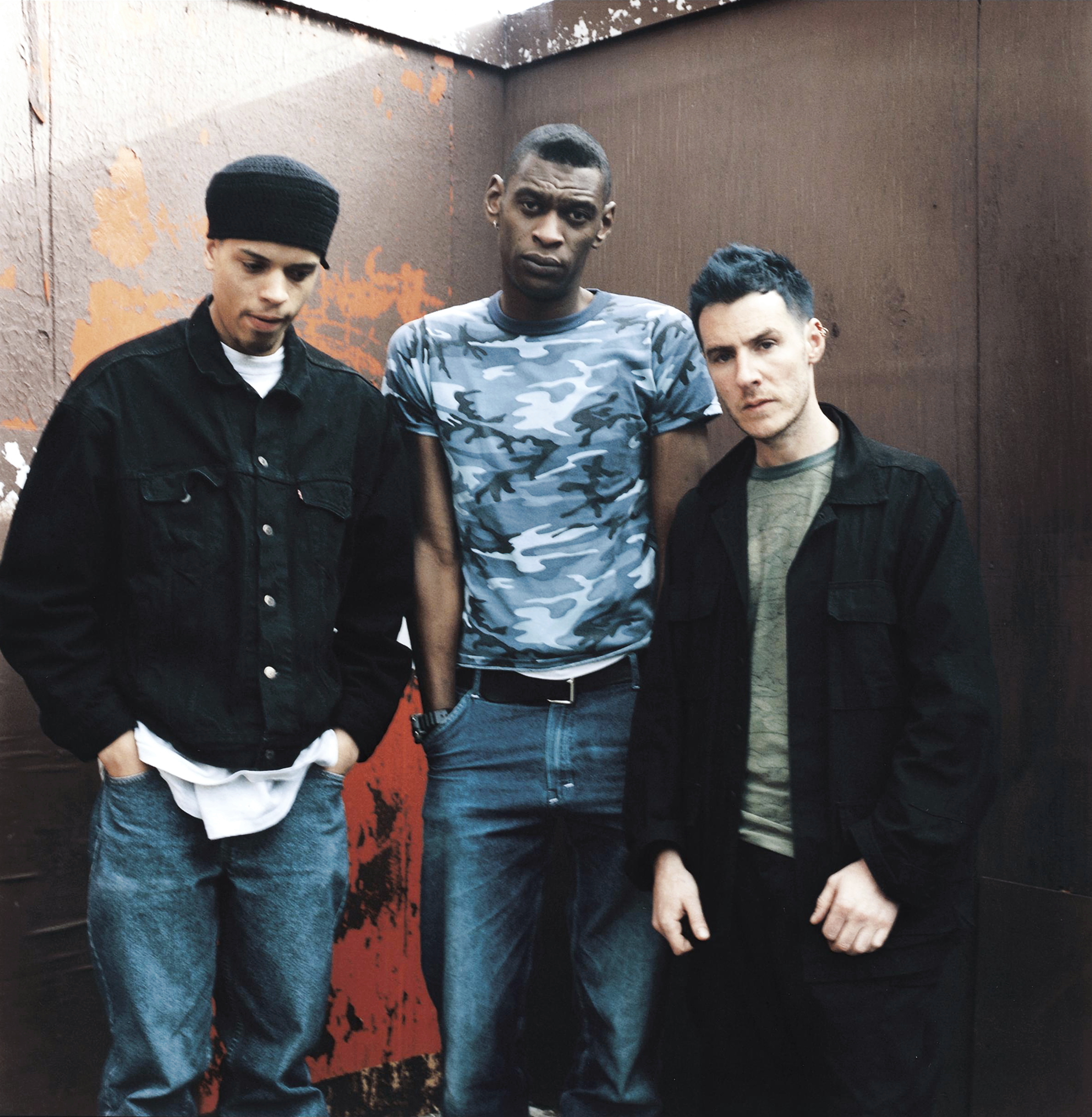 When Massive Attack released Mezzanine in 1998, they weren’t exposed to the recording equipment and technology most artists utilize today, making the album an even-more impressive feat. All of the artists in this playlist display some similarities to Massive Attack’s haunting electronic output through a number of genres, from hip hop, to R&B, to simply acoustic. See if you can imagine Massive Attack performing alongside these songs, and maybe their next studio album will resemble some of these current music trends.

Dan the Automator, one half of Deletion 3030, was given his first exposure to the popular music scene in producing Dr. Octagon’s Dr. Octagonecologyst, which was released on Mo Wax Records. The psychedelic and experimental hip hop trends of Mo Wax definitely influenced Dan the Automator’s direction as a solo musician and collaborator, and “Virus” is a perfect example of where he succeeds in making an impressionable mark on the genre. Del the Funky Homosapien, the other half of the group, attempts to bring down the world around him as he “composes a virus” to send panic into the world in hopes to change its comfortable course and institute change.

Nine Inch Nails ‘All the Love in the World’

Nine Inch Nail’s style of electronic music is very reminiscent of the terrifying qualities of Mezzanine, but Trent Reznor, the brain behind the band, was more influenced by heavier music in his early career than Massive Attack. As he has grown as a musician, some of his music has taken a more tranquil character, and “All of the Love in the World” is perfect mix of the two musical personas. Similar to Massive Attack, Reznor gradually adds instrumental layers and builds more and more tension as the song plays. By the end, he rips the previous arrangement to shreds only to build a new melody from scratch, which becomes equally as intense with distorted synthesizers.

FKA twigs’ songs often detail how she is lost in love, forcing her to wander into unknown passages to find satisfaction and belonging. Her heart aches for reassurance in “Papi Pacify”,  where she yearns for her lover to “clarify [their] love.” Arca’s droning production drips with twisted vocal samples, sporadic clicks of percussion, and bass-heavy waves, making twig’s question a terrifying ultimatum. Arca’s solo work carries the same fearful quality, only it’s more disjointed and requires more brainpower to fully comprehend.

Damon Albarn began to collaborate with Massive Attack after the release of Mezzanine, where he contributed vocals under the identity of Gorrilaz frontman 2D on 100th Window’s “Small Time Shot Away” and appeared as a contributing instrumentalist and vocalist on Heliogland. The philosophy behind “Stylo” is “electric is the love”, which is further emphasized by contributions from Bobby Womack (who’s performance on the track was his first since 1998) and Mos Def. Gorillaz band member Murdoc claimed the song is an effort make music euphoric, which feels evident as soon as the song beings with a catchy synth line. Take a walk with “Stylo” and feel the love “flowing on the streets”.

Most Portishead tracks are pretty slow and creepy, given Geoff Barrow’s sparing production and Beth Gibbon’s eerie but beautiful vocals. “Machine Gun” is one of the few tracks in the Portishead discography fitting for a set of club speakers with its dubby bass and percussion samples. The same beat is repeated throughout the song but is beautifully manipulated to take on multiple sinister forms, proving the beat for the track is nearly perfect.

Whenever I listen to Mezzanine, I often think how it’s a scary album. It’s grimy and slow character sends tickles down my spine, and Massive Attack emphasize that point through visualizations, like the beetle used for the album art and fetus singing in the “Teardrop” music video. Death Grips is easily the most terrifying and punk-oriented hip hop group today and remind me of this artistic angle. MC Ride, the band’s vocalist, raps with a roaring yell, which is fueled by his endless energy and frustration of being trapped in a world where he doesn’t belong. Zach Hill and Flatliner man the production for the group with loud sirens, live drums, and array of skewed and chopped samples from the oddest places in the music world. If you want to use your imagination, think of what 3D would sing about, if he were the vocalist on the song.

In 2012, Massive Attack curated a playlist of their current influences for BBC Radio 6. They featured “Savage Henry” as a current inspiration, which is no surprise when you hit play. When Massive Attack sings about being lost in the lights and sounds of a club, they describe the hectic and dynamic nature like Addison Groove’s music, whose heavy dub beats and chopped vocal samples can make anybody move.

Holly Herndon claims to be an electronic artist inspired by the endless limits of technology. Today, we’re exposed to so many different mediums and devices that our minds are sent into an abyss of possibility, where we are overwhelmed but satisfied of our access to the world around us. Herndon does that in her music, where a variety of fast and slow moving vocal clippings, static, and psychedelic wish-wash is tied together by a mysteriously executed bass composition. “Interference” is oddly addicting because it’s a song that’s impossible to pin down and understand yet you try to do so until your brain can’t follow its sudden movements any longer.

If you’re looking for an artist that is most consistent with Massive Attack’s style of electronica, look no further than Burial’s Untrue. “Ghost Hardware” is one of the album’s sweeter tracks, thanks to its ghostly female vocal sample, while most of the others feel more fitting for isolation or admiring the darkness around us. I’ve had many great spins of the album on the subway, and it’s easy to get lost in the track’s repetitive beauty while the sounds of the train against the rails below seep through your headphones.

UNKLE is the project of James Lavelle and Tim Goldsworthy, co-founders of alternative hip hop label Mo Wax. Without Mo Wax, UK hip hop wouldn’t be as challenging and complex as it is day— its releases inspired artists to do more with sampling, vinyl, and experimentalism. UNKLE have made their own make on the genre with well-known collaborations with Thom Yorke, Mike D, 3D from Massive Attack, and more. On “Restless”, they craft a melody similar to the Arctic Monkeys’ recent output for Queens of the Stone Age frontman Josh Homme, where he sings about fighting with a mysterious feeling within himself.

Shabazz Palaces ‘Are you… Can you… Were you?’

Shabazz Palaces is an experimental hip hop duo created by Ishmael Butler, founder of 90s hip hop group Digable Planets, and multi-instrumentalist Tendai Maraire. Their debut album, Black Up, is a crazy-but-addicting variation of modern hip hop has yet to be topped- most songs contain multiple addicting melodies, many of their weird experiments succeed, and Butler’s societal critiques are thought-provoking and relatable. In “Are you… Can you… Were you?”, Butler raps about handling life’s hardships and how achieving success is an endless struggle contained within one’s self. Our happiness cannot be entirely defined by the world around us, even though its influences can be overwhelming, and here, Butler is telling the listener to look inside his art and feel inspired to reflect on oneself and relationship between their mind and heart.

Disclosure ‘Help Me Lose My Mind’

While most members of Massive Attack contributed vocals to their songs, they depended on their featured vocalists most to bring variety to their dark, experimental output. Disclosure is a bit more pop-oriented than Massive Attack, but their collaborations with popular vocalists are well-executed, especially on their debut album Settle. The last track on the album, “Help Me Lose My Mind”, features electro-pop group London Grammar along with synth lines that gradually float in and out of focus. Disclosure is proficient in creating effective dance arrangements entertaining enough to propel the song forward without overwhelming the vocalist’s contributions, giving London Grammar an excellent opportunity to exercise her dynamic vocal range.

While this playlist is understandably consumed by electronic music, Jose Gonzalez, who is also a member of alternative rock outfit Junip, curated a gorgeous cover of “Teardrop” for his sophomore solo album, In Our Nature. Not only does he accurately mimic Elizabeth Fraser’s elusive vocal performance, but he also builds tension during the track’s vocal-less moments with layers aggressive guitar strumming. Gonzalez absolutely does justice to Massive Attack’s best known track here.

[ Past ] Album of the Month Club: Goldfrapp ‘Felt Mountain’