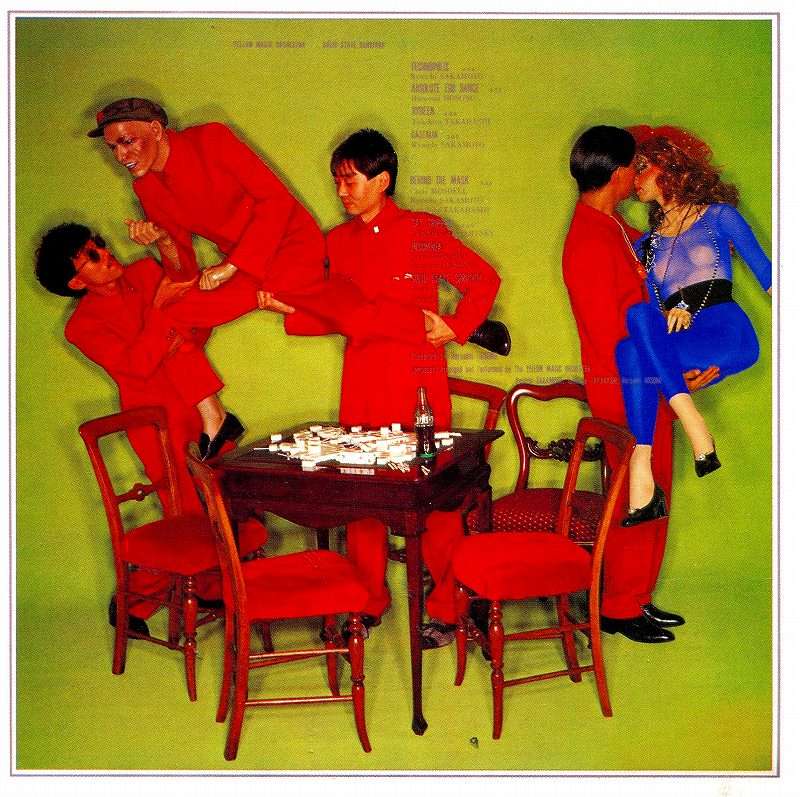 If you’ve played a reasonable number of video games over the past forty years then chances are you’re already aware of the melodic prowess of Japanese composers: be it the pastoral serenity of Koji Kondo’s The Legend of Zelda: Ocarina of Time, the pulsating intrigue of Nobuo Uematsu’s Final Fantasy VII, or any number of titles from the esteemed back-catalogues of Nintendo, Sega or Capcom. Creating musical themes that are replayed more frequently than in any other form of popular entertainment these composers have time and again surmounted the challenge of writing music that will satisfy, and not irritate, during its potentially infinite repetitions.

If you’re a more seasoned gamer you may have come across a sterling example in ‘Rydeen’. Yellow Magic Orchestra’s soaring electro-pop epic, taken from their 1979 album Solid State Survivor, was not only a major influence on the development of early video game music (or “chip tune”) but also appeared directly in titles such as Trooper Truck (1983) and Super Locomotive (1982). More so, the song’s incredible marriage of propulsive rhythm and sugar rush melody laid out the blueprint for what was to become an era defining sound not only in Japan but in western countries such as the UK – where cheap Japanese electronics were being retuned to the post-punk atmosphere.

Whilst Kraftwerk are often cited as the godfathers of modern synth-pop, YMO remain strangely undervalued despite operating within the same era and being, at one point, the most successful band recording in Japan. This was perhaps due to the disparities in their respective performance styles: Kraftwerk played up to the obvious robotic metaphor of the synthesiser, remaining rigidly arch, but YMO embraced its inherent sexiness and futuristic cool, fusing eastern tradition with the familiar structure of western pop music. Ryuichi Sakamoto, Haruomi Hosono and Yukihiro Takahashi showed that electronic music could integrate with our established notions of music and fashion – it wasn’t just a temporary gimmick to play around with.

Solid State Survivor would cement this idea. YMO had released their debut self-titled album just one year prior in 1978, featuring the infectious ‘Firecracker’: a bold subversion of American composer Martin Denny’s 1959 exotica melody, which offered a rebuke to the oriental stereotypes reductively ascribed to Japanese culture by western observers. By comparison its 1979 followup sounds determined to break with the past and keen to explore the liberating potential of electronic composition, and the respective talents of each band member flourish as a result. Sakamoto’s classical and ethnomusicological training (honed through his extensive experience as a session musician) presents itself in the impressive melodic range of tracks such as ‘Insomnia’ and ‘Rydeen’, whilst Hosono’s multi-instrumental skills and Takahashi’s experience as a touring drummer meld to form the rhythmic backbone of songs such as the new-wave-tinged Beatles cover ‘Day Tripper’.

Album opener ‘Technopolis’ offers a particularly prophetic vision of where pop-culture was heading in the 1980s. Not only does it’s name evoke a now familiar fusion of science-fiction and urban living, the heavily vocoded lyrics and precise pulse of its percussion foreshadow the rise of cyberpunk literature by authors such as William Gibson, films such as Katsuhiro Otomo’s Akira, and musical developments which would occur in Detroit soon after. Cybotoron (a duo consisting of future techno godfather Juan Atkins and Vietnam veteran Rick Davis) would expound upon the rapid dehumanisation and digital consolidation just beginning to take hold with their early electro experiments – seeds which would eventually blossom into the incredibly diverse techno of Underground Resistance, Kevin Sanderson, Derrick May, and countless others. YMO’s influence was a trojan virus spread quietly through the system.

The band’s decision to deliver their lyrics in English (with help from translator Chris Mosdell) spoke to their ambition to be known as a globalised band, accessible to as wide a range of people as possible. Having grown up in a post-war Japan that was both coming to terms with its isolated past and anticipating its precarious future, its not hard to understand how American imports of jazz, rock, funk, and folk records might have represented a break from the troubles of their parents’ generation. In the early ‘70s Hosono began his recording career emulating the likes of James Taylor and The Band on Hosono House – from the cover of which the musician stares with long hair and a drooping moustache. For Sakamoto, it was the French impressionist composer Claude Debussy who inspired his experiments with American synthesisers such as the ARP Odyssey and the Moog modular system. And Takahashi had even played in the Sadistic Mika Band: a rock group whose name was a parody of the Plastic Ono Band. A feedback loop between east and west had been running long before YMO were a reality.

Despite YMO’s relatively brief lifespan its fascinating to hear just how alive their music remains and how little it has aged as we listen from the perspective of an era in which the early ‘80s is still revered as a golden age of electronic invention. Each of the band’s three members has enjoyed a celebrated and diverse solo career, but Sakamoto in particular remains a shining example of restless creativity, transitioning from synth-pop, to electronic dance music, to acoustic piano experiments, to avant-garde composition and an award-winning score for the Leonardo DiCaprio film The Revenant. His journey has been an incredible one to watch – a fitting tribute to the mind-expanding experience of those early listeners so captivated by the technicolour thrills of Solid State Survivor.

The Story of Public Enemy ‘It Takes a Nation of Millions...