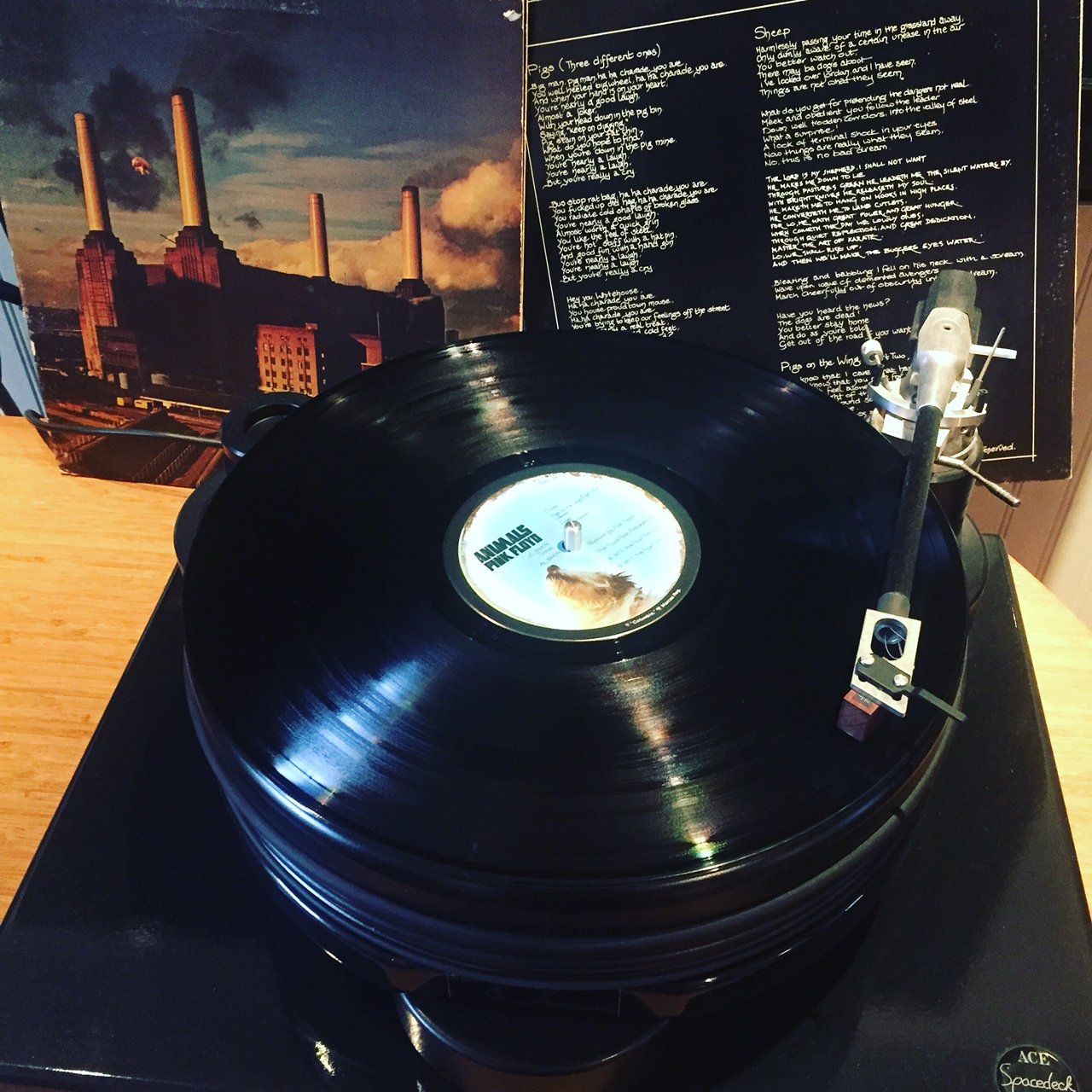 In 1976 Pink Floyd were flying high with their incredibly successful The Dark Side Of The Moon. It was still on the album charts and would be for an additional 12 years. The band had also had great success with their follow-up Wish You Were Here which met with commercial success even though the concept of the album centred around long lost bandmate Syd Barrett and their disdainful feelings toward the music business. 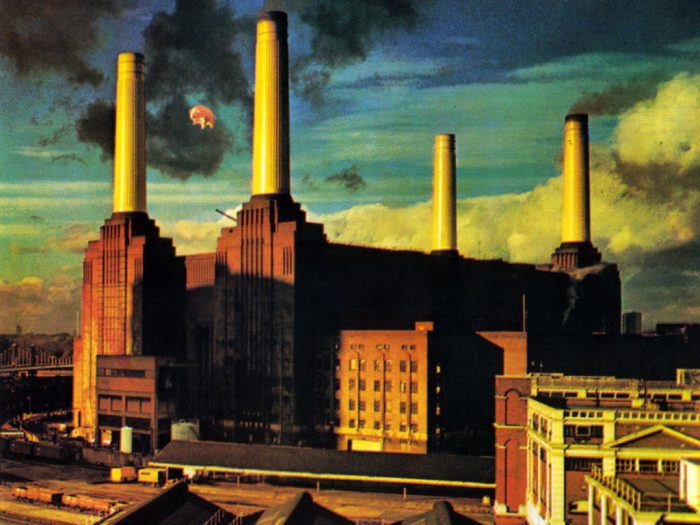 At this time the band decided to take a break from touring and instead, supplied with their somewhat increased earnings, turned their focus to building their own studio. They plowed in half a million pounds and after a year of construction, the Britannia Row studios in London’s Islington district was open and ready to record their next album, Animals.

Due to their success and the rise of Roger Waters as the band’s creative conceptualist and lyricst, there were a lot of tensions within band due to creative disagreements. After their huge success all of the band members had considered quitting at one point or another. Despite the tensions, Waters once again hopped in the driver’s seat and this time steered the album’s concept in another direction as he turned his eye to society, itself. 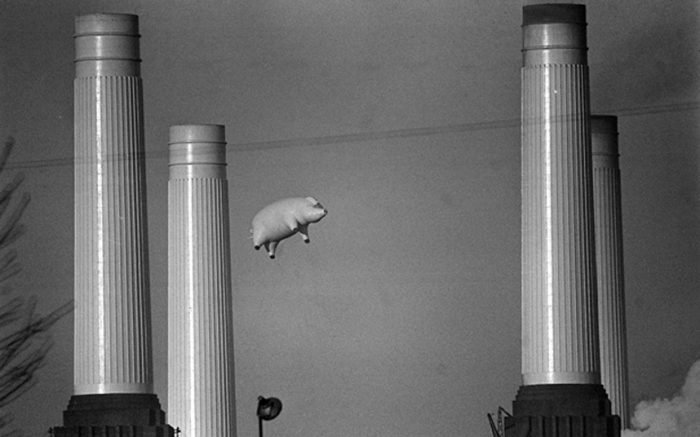 The album is much more direct as it features confrontational lyrics loosely based on George Orwell’s Animal Farm. The Orwellian novel explores the corruption of power and human nature’s predisposition to destroy even the best ideals. The novel criticised Stalinism and represented the people within the different levels of communist society as animals. Somehow this seems particularly apt in the current political climate.

The pigs are the smartest animals and originate the idea of a rebellion against the farm’s oppressive owner. The pigs then run the farm and abuse their power. They use the dogs as secret police and to keep the other animals in line by killing those they considered traitors. The sheep are the mindless masses who follow the pigs’ every whim no matter how ridiculous they may seem.

Instead of critiquing Stalin’s political system, Waters used the metaphor to apply to people in thrall with, or subject to capitalism.

Watch: Classic Album Sundays with The Orb at The V&A Museam on Pink Floyd ‘The Dark Side Of The Moon’

He in particular applied this concept to 1970’s Britain. The pigs are dictators scared of the unknown but want to decide what is best for all. The dogs are cut-throat corporate stooges who will use any means necessary to climb on top of the heap. The pigs use the dogs to keep the meek and subservient masses of sheep in line. 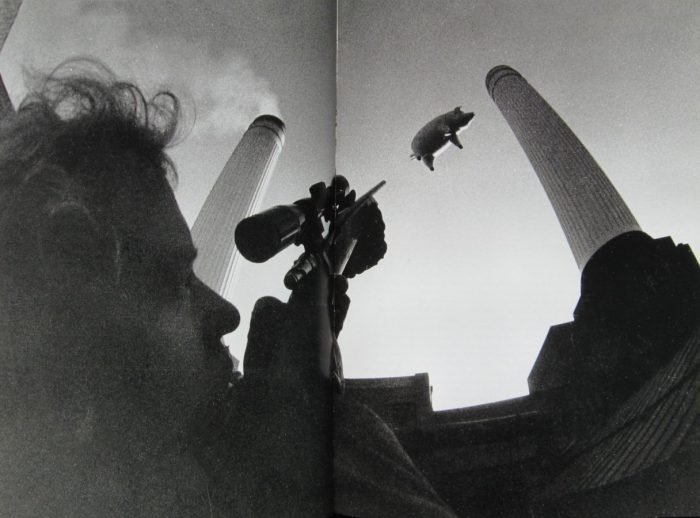 Waters felt compelled to write about society’s woes as he said at the time: “I think the world is a very, very sad place. I find myself at the moment, backing away from it all. I think these are very mournful days. Things aren’t getting better, they’re getting worse and the seventies is a very baleful decade.”

There are three pigs, two of which represent real characters. The first is the corporate pig, the second is Margaret Thatcher, and the third is Mary Whitehouse, leader of the National Viewers and Listeners Association who spoke of moral pollution through an intense censorship campaign. As Waters said “Why does she make such a fuss about everything if she isn’t motivated by fear? She’s frightened that we’re all being perverted. I was incensed by Mary Whitehouse, as I am by all book-burners and Bible-bashers: people who foster that sexual guilt and shame, who try and deny people any opportunity to fulfill their sexual destiny.”

Of the sheep Waters had to say, “Sheep was my sense of what was to come down in England, and it did last summer with the riots in England, in Brixton and Toxeth, and it will happen again. It will always happen. There are too many of us in the world and we treat each other badly. We get obsessed with things, and there aren’t enough of things, products, to go ’round. If we’re persuaded it’s important to have them, that we’re nothing without them, and there aren’t enough of them to go ’round, the people without them are going to get angry. Content and discontent follow very closely the rise and fall on the graph of world recession and expansion.” 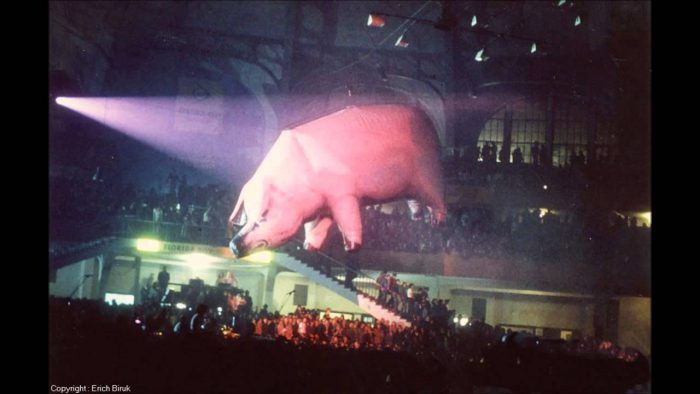 As “Shine On You Crazy Diamond” did on Wish You Were Here, “Pigs On The Wing” sandwiches the rest of the album by opening and closing it in two parts. The song tempers the rage on the rest of the album as it is a love song for Waters new wife, Carolyne Christie. Guitarist David Gilmour felt it was a good fit as he explained, “There are moments when real ear-splitting, abrasive sound is right and moments when it just isn’t. You try to make each piece of music fulfill its potential.”

It serves as a reminder that amidst the never ending cycle of human social tragedy on a mass scale, as individuals we can find somebody we can share our lives with. Waters says the first verse means “Where would I be without you?” and the second verse says “In the face of all this other shit–you care, and that makes it possible to survive.”

With regards to the music, a couple of the songs had been developed when touring before Wish You Were Here was recorded, including “Raving And Drooling” which was reworked and reappeared as “Sheep” and “You’ve Got To Be Crazy” which became “Dogs”.

Like The Dark Side Of The Moon, Pink Floyd use sound EFX to reinforce the lyrical content, this time complete with animal noises which are further played with by running them through vocoder and Leslie speakers.

The album cover was once again designed by Hipgnosis’ Storm Thorgeson and Aubrey Powell, but this time along with Roger Waters. It pictures a 30-foot inflatable pig tethered over Battersea Power Station in London. The shoot took three days to complete. On the first day they hired a marksman to shoot the pig if it broke free. They didn’t recall seeing him on day two when the pig broke free and sailed through Heathrow airspace and eventually landed in a Kent field whose farmer was furious it had scared his cows.

When Animals was released in January 1977, it didn’t receive overwhelmingly great reviews. It came out during the punk and disco heyday, a time when Johnny Rotten had taken to wearing a Pink Floyd shirt on which he scrawled “I hate”. 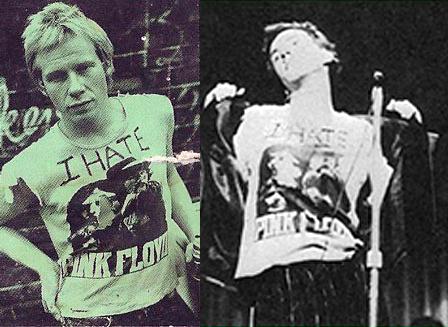 This probably didn’t create a conducive setting and may have subconsciously influenced critics’ opinions of the album. They may have also been reacting to the band’s overwhelming success and their predilection for shunning the press (they didn’t even have a PR agent).

Here is a bit of the Rolling Stone review: “For Pink Floyd, space has always been the ultimate escape. It still is, but now definitions have shifted. The romance of outer space has been replaced by the horror of spacing out… Animals is Floyd’s attempt to deal with the realization that spacing out isn’t the answer either. There’s no exit; you get high, you come down again. That’s what Pink Floyd has done, with a thud.”

Once again critics were proved wrong as Animals is many Floyd fans’ favourite. It is also interesting to note that Johnny Rotten’s position was slightly rocked when Floyd drummer Nick Mason later went on to produce The Damned’s 1977 album “Music For Pleasure”.