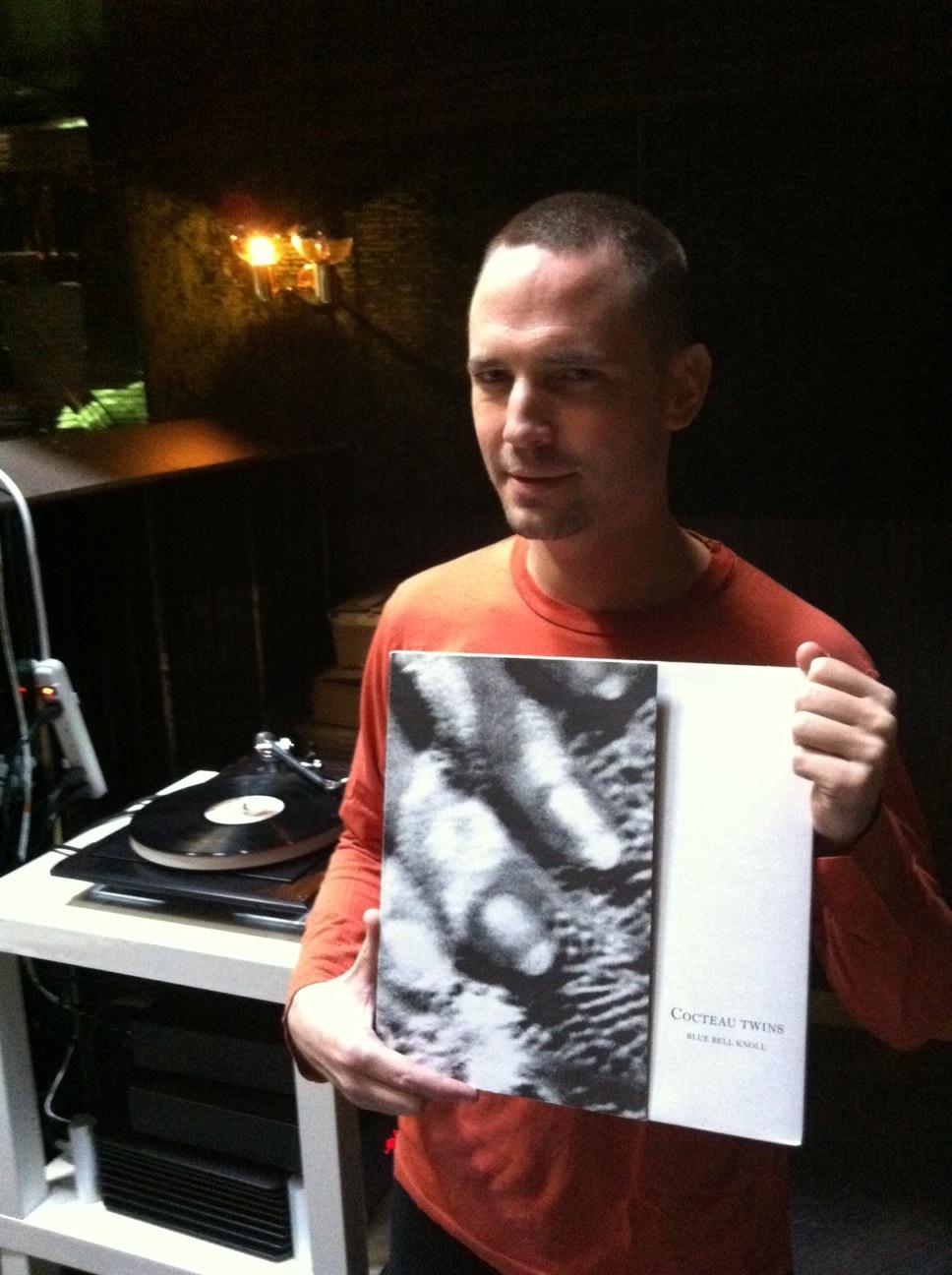 This Blue Bell Knoll history and background presentation has been synthesized from information and interview outtakes by Craig Roseberry, the research and words of Colleen Murphy, the Cocteau Twins’ blog and my own research and experiences with the album.

Though clear influences can be cited such as Kate Bush, Siouxsie & The Banshees and their contemporaries The Cure; Cocteau Twin’s undoubtedly developed a unique sound over their career. The band is quoted as having been fans of the Sex Pistols and The Birthday Party, and mentions of a cross-influence between Cocteau Twins and Prince, including around the time of Blue Bell Knoll’s recording, is well documented.

Preceding the recording of Blue Bell Knoll, in the mid-eighties, The Cocteau Twins had a recording gap and had not recorded an album with their full line-up since 1984’s ‘Treasure’. However, the band members had kept themselves occupied, recording an album with Brian Eno collaborator Harold Budd called ‘The Moon and The Melodies’, though it did not come out under Cocteau Twins’ name but rather under the bandmembers’ individual names. In that same year they released the largely acoustic and ambient ‘Victorialand’ under the bands name, but bassist Simon Raymonde was not able to record with Guthrie and Fraser as he was working with 4AD super-act This Mortal Coil. In the ensuing two years, Cocteau Twins signed with Capitol Records in the USA and once again joined together to record their debut release on the label, ‘Blue Bell Knoll’.

Devout Cocteau Twins fans would have noticed a distinct auditory difference between the acoustic soundscapes of ‘Victorialand’ and their new album. While their ’86 album was devoid of percussion and had a more delicate feel, ‘Blue Bell Knoll’ was more of an immersive sonic assault more akin to a modern day Phil Spector induced “wall of sound”. The music manages to be dense, powerful and bold and at the same time dreamy, fragile and beautiful. They used percussive sounds like marimba, xylophone and a plucked harpsichord tucked into the layers. Fraser also used her voice more powerfully and in a manner she later called “exhausting” when speaking to The Guardian. She said it was “like an endurance test. I don’t intend to do that again.”

‘Blue Bell Knoll’ marked a significant turning point for the Cocteau Twins and 4AD. Up until that time, The Cocteau Twins’ first official domestic US release was 1986’s ‘The Pink Opaque’ (an album compiling previously released material to act as a sampler of the Twins’ recorded output between 1982 and 1985) by way of an agreement with Relativity Records. Relativity also provided distribution for 1986’s four-track EP, ‘Love’s Easy Tears’, the band’s first set of new material for the US market. The band would later ink a US deal with Capitol Records for their remaining output – ‘Blue Bell Knoll’ (1988), ‘Heaven Or Las Vegas’ (1990),’Four Calendar Cafe'(1993) and the final album ‘Milk and Kisses’ (1996).

‘Blue Bell Knoll’ represented the seeds of what would come on ‘Heaven Or Las Vegas’. It encapsulated the sound and style of the Twins’ previous nine years in a more fluid and cohesive way, and was an actual album with its’ own progression and emotional journey. It expanded on their unique sonic tradition of elegant arrangements and added heavily reverbed guitars run through a series of effects and atmospheric keyboards.  Voices were used as instruments rather than just as a means to convey words. The band’s uniqueness can be attributed in part to this beautifully realized aspect of Elizabeth Fraser’s distinctive voice and vocal approach. Throughout ‘Blue Bell Knoll’, Fraser’s voice is often played against itself, creating harmonies and backup vocals, adding a lush density to the other bandmates’ instrumentations. Her voice shines and captures the listener.

When I first heard this album, I knew I was hearing something different and special but I am struck in retrospect by how I didn’t initially search for word meanings. It just enveloped me. I think this is because the soundscapes that were created with this approach felt so gorgeous and intuitive that it almost didn’t even matter… It should be noted though that she would not admit to the brilliance of this method very easily. She was known to dismiss her esoteric vocabulary with statements like, “There’s not that many words made up, really. It’s just bad grammar; bad diction. Don’t even bother yourself over it.”… which is a little heart-warming if you ask me.

In terms of overall methodology for this album, the band has said that their tendency was to make it all up as they went along. The natural way of working was to let the songs develop in the studio as to what felt right as they went along rather than writing songs and then making them happen from a preconceived template.

Some quotes from guitarist band member Robin Guthrie:  “We never enjoyed the idea or insistence of people needing us to explain or define what we do…we made music… followed our instincts and tried to make good records…sometimes we struck upon something completely inventive and otherworldly…other times we put out crap. That’s just how it is. Who’s ever 100% happy with everything they do? Whoever claims that everything they do is amazing or genius is an idiot – a fucking liar. We wanted the arch of our work to speak for itself – to occupy it’s own space and time.

“With ‘Blue Bell Knoll’, we found our groove – a comfort zone for all of us where we could flourish creatively and come up with something we didn’t completely hate. We certainly weren’t trying to be enigmatic…the music just came out the way it did. We finally learned how to play our instruments and work all of the gear properly and it shows, really. We made beautiful music but it was always strange. Not strange in a bad way, but different from everything else that was going on at the time. We were a fantastic mess… We were at an interesting place in our career and development by the time we started working on Blue Bell Knoll… – We had a lot of ideas about textures and sonics – and writing more compact, concise songs with resonance.

“That said, we never consciously set out to change or make a stronger, more pop record. Simon and I set about doing the music and Liz handled the lyrics. She was always more comfortable writing melodies instead of words per se…she never had an obsession with words and storylines…she was much more interested in the emotion, the feeling that the music conveyed to her…she wanted to capture that and deliver something that anyone could relate to and define however they wanted to regardless of how personal, intimate or revealing a particular song was to her…she wasn’t trying to be clever or obtuse, she was just expressing herself honestly from the inside out…that was her process… Some of the songs of Blue Bell Knoll evolved out of melodies or lullabies she was singing to our baby while she was pregnant. There was so many emotions and feelings inside of her that needed to come out and breathe – live – and she just let them dictate to her rather than the other way around. You know like when you have a feeling so intense it’s beyond words and you try to capture it and convey it…sometimes it’s best done without words.”

Blue Bell Knoll was the first Cocteau Twins’ album to have a US release and from the album’s opening metallic notes of the harpsichord ethereally chiming over a rooted kick drum, one can hear the Cocteau’s change in course from previous material. Compared with the vulnerable bareness of “Victorialand” some of which we heard earlier today, the dense layers of “Blue Bell Knoll” feel edgier and more foreboding, albeit still dreamy. Fraser’s beautiful soprano is sporadically tracked and embellished by simple musical lines of guitar. Her vocals become the focal point of the first half of this song with their contextually new force and gravitas. However, the album’s opener is a song of two parts. Midway through, the guitar climactically breaks free and we are treated to an onslaught of beautifully melodic feedback and Robin Guthrie’s “guitar solo” that is less concerned with the number of notes played than the powerful sound of those notes. Somehow the layers of treated guitar do not create a soupy mess. All of the sounds manage to be separate and distinct.

In a documentary by Hypnagogia Films entitled ‘Beautiful Noise’, Robert Smith of the Cure says of the Cocteau Twins’ music, “It was the most romantic sound I’d ever heard.”

And another quote from Robin Guthrie: “We’ve got nothing at all to say, just to listen to the music, that is what’s important.”