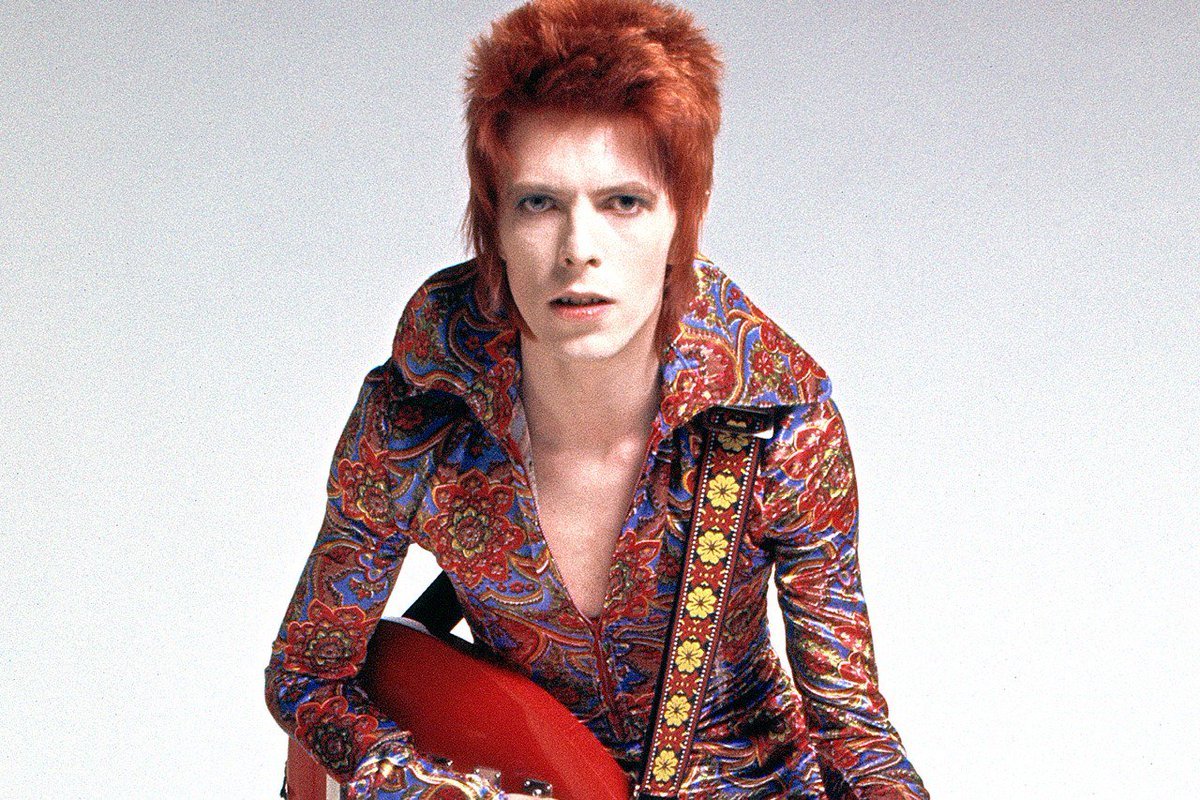 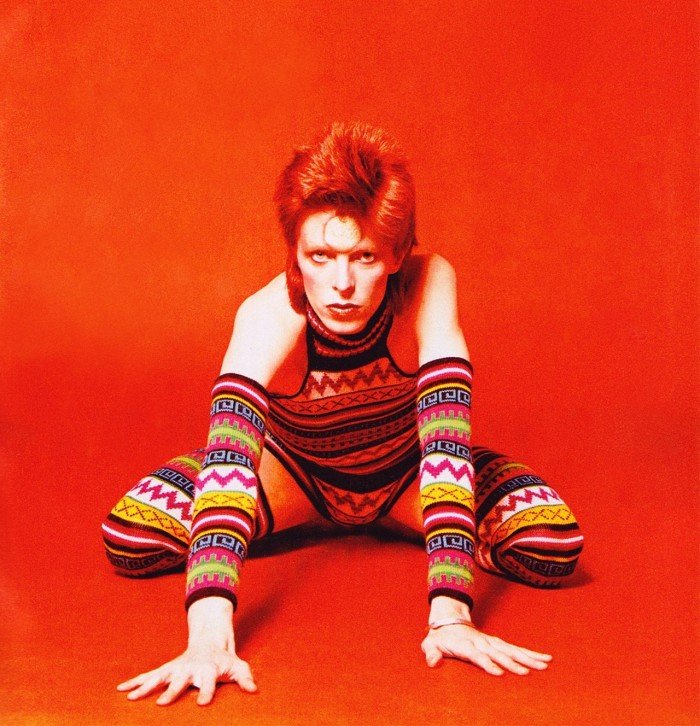 While writing for his album ‘Hunky Dory’, Bowie was also writing songs for a group he created called Arnold Corns. Strangely, he did not initially plan on singing the songs himself but instead enlisted a gorgeous fashion designer named Freddie Burretti, aka Rudi Valentino, to sing lead vocals. That did not work as well as Bowie anticipated, so he ended up doing the vocals himself. Two of the songs, ‘Moonage Daydream’ and ‘Hang Onto Yourself’ were released in the spring of 1971 and flopped (check out our Musical Lead-Up Playlist via the link below to hear these renditions). However, not all was lost as these songs were re-recorded and became an essential part of Ziggy’s repertoire. And Buretti remained in the pictures as he became the designer for Ziggy’s elaborate costumes.

Bowie had studied with mime artist/dancer/performance artist Lindsay Kemp and was adept at role-playing. He felt the need to write a theatrical piece and initially aspired to writing a musical. However, he did not feel he had the necessary skills, so instead created a character as the central figure for an album.

Bowie began to develop the persona Ziggy Stardust who was partially based upon the country-western cult figure, The Legendary Stardust Cowboy, an “outsider” musician who was on the same label as Bowie. Another influence was Vince Taylor of whom another rock luminary, Joe Strummer of The Clash, remarked, “Vince Taylor was the beginning of British rock’n’roll. Before him there was nothing.” After massive success the previous decade, by the mid-sixties Taylor was indulging in heavy drug use and subsequently announced he was the new Jesus. Bowie did meet ‘the leper messiah’ in 1966 by which time Taylor was immersed in an alternative reality. (Check out these inspirations on our Musical Lead-Up Playlist link below).

There is one more possible influence on the Ziggy character (and the name may be a hint): Iggy Pop. With his band The Stooges, Iggy’s wild, outrageous and sometimes self-destructive behaviour was as equally powerful as The Stooges’ proto-punk sound. Due to all-round messy conduct, The Stooges were dropped from their label and Bowie brought Iggy to London, helped him get signed to Columbia Records and then he produced the new Stooges record, ‘Raw Power’.

‘The Rise and Fall of Ziggy Stardust and The Spiders from Mars’ was released on the 6th of june, 1972 and a month later performed ‘Starman’ dressed as an alien rock star on Top of the Pops, an event that changed many future musicians’ lives. Opinion was divided. The freaks loved him and the traditionalists dared not decipher the alien in their living rooms. But any PR is good PR and this performance helped spur Ziggy to become the most significant mythological rock icon.

As a great vocal dramatist and with his cross dressing and gender bending, Bowie knew how to cull a personality. Around this time he announced he was bisexual while married to his wife Angela and drew a line between himself and the very hetero male rockers of the early seventies. The lines between the real person and his contrived character began to blur. Davy Jones became David Bowie who became Ziggy Stardust, his alter ego. He became obsessed with his creation and started to introduce himself as Ziggy Stardust on tour and in interviews.

Ziggy Stardust, The Stooges, Lou Reed and Roxy Music’s debut helped signal the end of the sixties and the hippy movement and marked the musical and stylistic transition into glam rock and punk. However, just like ‘Flower Power’, even Ziggy had to come to an end. After the band’s final show of the tour at London’s Hammersmith Odeon on the 3rd of July, 1973, much to the dismay of his audience and his band, Bowie, or Ziggy, announced that it was the last show that they would ever do.

With Ziggy Stardust, David Bowie had succeeded in turning a popular art form, pop music, into high performance art. He lived and breathed the character of his own construction until it nearly consumed him. He had to retire the character and “break up the band” for his own piece of mind and his own sanity. However, did still refused to expose his “real” self to his fans but instead, as a maestro of artifice, created another character, Aladdin Sane, who Bowie described as “Ziggy goes to America”.

Because he related to those on the fringes of society and helped fortify the pop institution of performance art and role-play, Ziggy’s resonance is still felt today throughout music and pop culture. Although Bowie killed off his alien rocker via a rock n’roll suicide, Ziggy Stardust lives in the hearts of society’s outcasts encouraging them to march to the sound of their own drum.

Colleen relays the story behind the making of ‘The Rise and Fall of Ziggy Stardust and the Spiders from Mars’ in this Youtube documentary here.

Check out the songs that inspired or were related to Bowie’s 1972 album in a Musical Lead-Up Playlist here.

Album Suggestions for May 2014