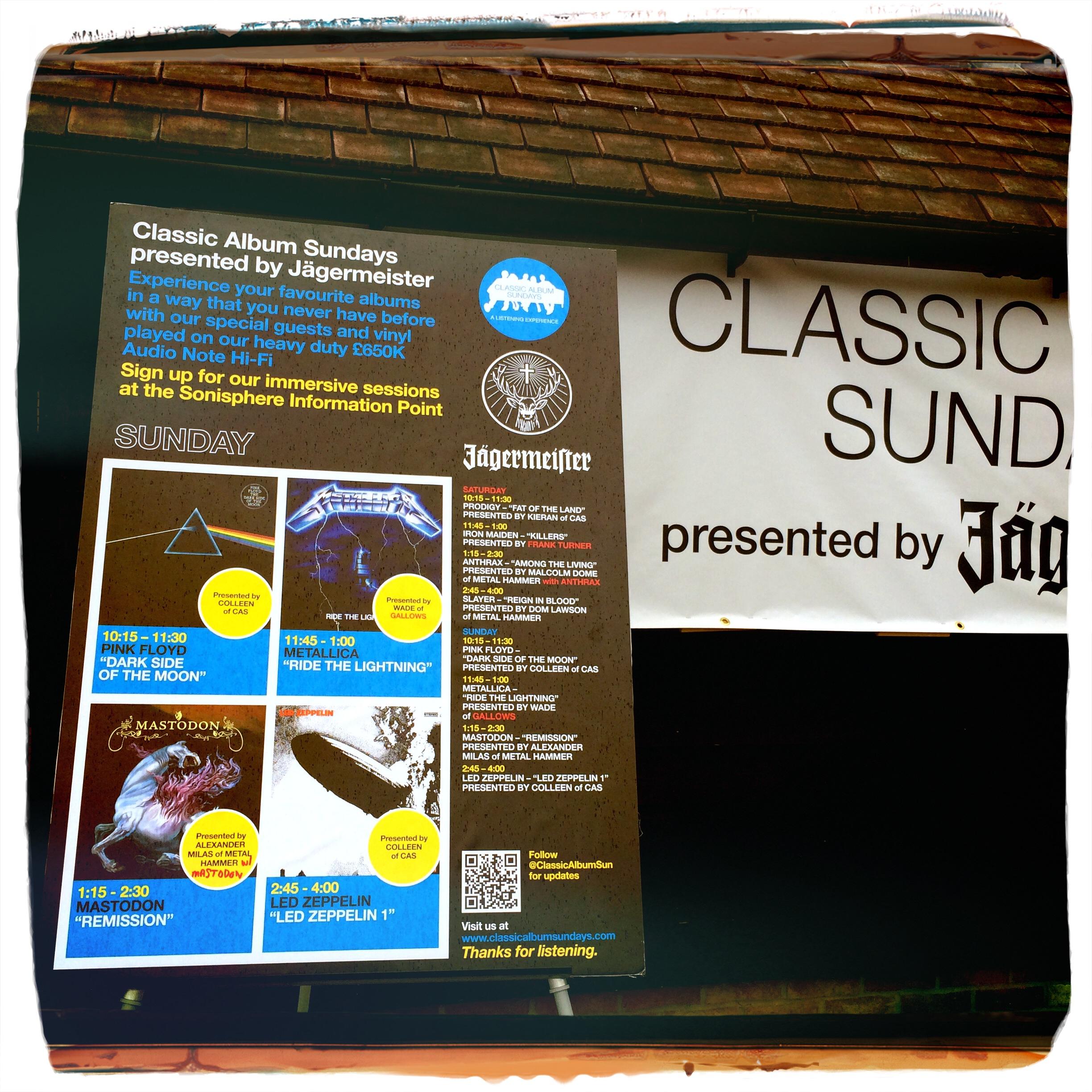 After a brief but much needed night’s sleep, the sun was once again shining over the fields of Knebworth as the Classic Album Sundays team got to work setting up for the a day packed with some heavy duty listening. The first Sunday session was going to be a very special one. CAS founder Colleen Murphy presenting one of the greatest classic albums of all time: Pink Floyd’s ‘The Dark Side Of The Moon’. Half an hour before the session the crowd was gathering outside our venue, ready to experience the ultimate festival wake-up call. As the fans trooped in to occupy every and all space possible, we spotted out a few very important guests.

The CEO of our partner Jägermeister and his family were seated next to possibly the most important person at the whole festival, the man who was responsible for every single triumph, every single slice of history Knebworth has ever delivered, Mr David Lytton-Cobbold, AKA the Baron who started Knebworth Festival 40 years ago. Those in the room were treated to a very unexpected story about Mr Lyton-Cobbold’s recalling his favourite performance when he booked Pink Floyd in 1975. Then the house lights dimmed, and the purest sounds of ‘Dark Side Of The Moon’ whisked each and every person in the room away into the music.

With such a powerful and perfect start to the day, it was hard to imagine anything else topping our Pink Floyd session, but once again, in what felt like seconds the house lights were on and the next crowd were taking their seats. The presenter of the next session made a name for himself in two of the greatest punk bands of the last 30 years. We were delighted to welcome the one and only Wade Macneil of Alexisonfire and Gallows to talk about one of his favourite records: Metallica’s ‘Ride The Lightning’. As a lifelong fan of Wade’s work, I had the honour of interviewing him about his love of Metallica. With little prompting Wade launched into a tirade of adoration for the album and Metallica themselves, divulging encyclopaedic knowledge of the album, and some very funny stories about his own experiences growing up as a Metallica fan in Canada. After a quick crowd Q&A we launched head first into ‘Ride The Lightning’ on our amazing 650K Audio Note & Robert Lighton hi-fi.

As the album finished, one rockstar left the room, and three entered. Not only were we graced by the presence of Troy Sanders, Bill Kelliher and Bran Dailor of metal giants Mastodon to talk about their classic album ‘Remission’, but a wonderful  interviewee, the Team Rock Editor-in-Chief, Alexander Milas. The band engrossed attendees with stories from the formation of Mastodon, the recording of the album and some generally interesting slices of life in Mastodon. Not only did we have the band in the room, but we also treated fans to the world premier of the glorious new re-master of the album. It was so new in-fact, that the band themselves were introduced to it for the first time in the session. Once again we all settled in and dived headfirst into the amazing sounds of ‘Remission’.

Soon it was time for the fourth session of the day, and sadly the final of our Sonisphere sessions. It came time to end one amazing weekend of one offs, world firsts, amazing guests, insightful stories and eight of the finest albums ever made, sounding as good as they possibly could. There was only one way to top off the weekend, and that was with Colleen talking about an album that no doubt inspired each and every band that played the Sonisphere Festival 2014 (and ‘heavy music’ itself): Led Zeppelin’s ‘Led Zeppelin 1’. There was an air of solemn peace in the air as Colleen delivered her insightful talk, and for one last time everyone in the room settled in for the beginning of the end.

Classic Album Sundays at Sonisphere. What an experience. Those who were lucky enough to catch a session will no doubt remember the purity of the music they love for the rest of their lives. Those who didn’t had no idea what they were missing. If you were there we’d love to hear what you thought of the sessions and if you weren’t hopefully we’ll be back next year (and you can check out what our attendees suggested as featured albums here.)

Part One of our Sonisphere Highlights

My Classic Album: Pink Floyd’s Nick Mason on ‘Dark Side of...