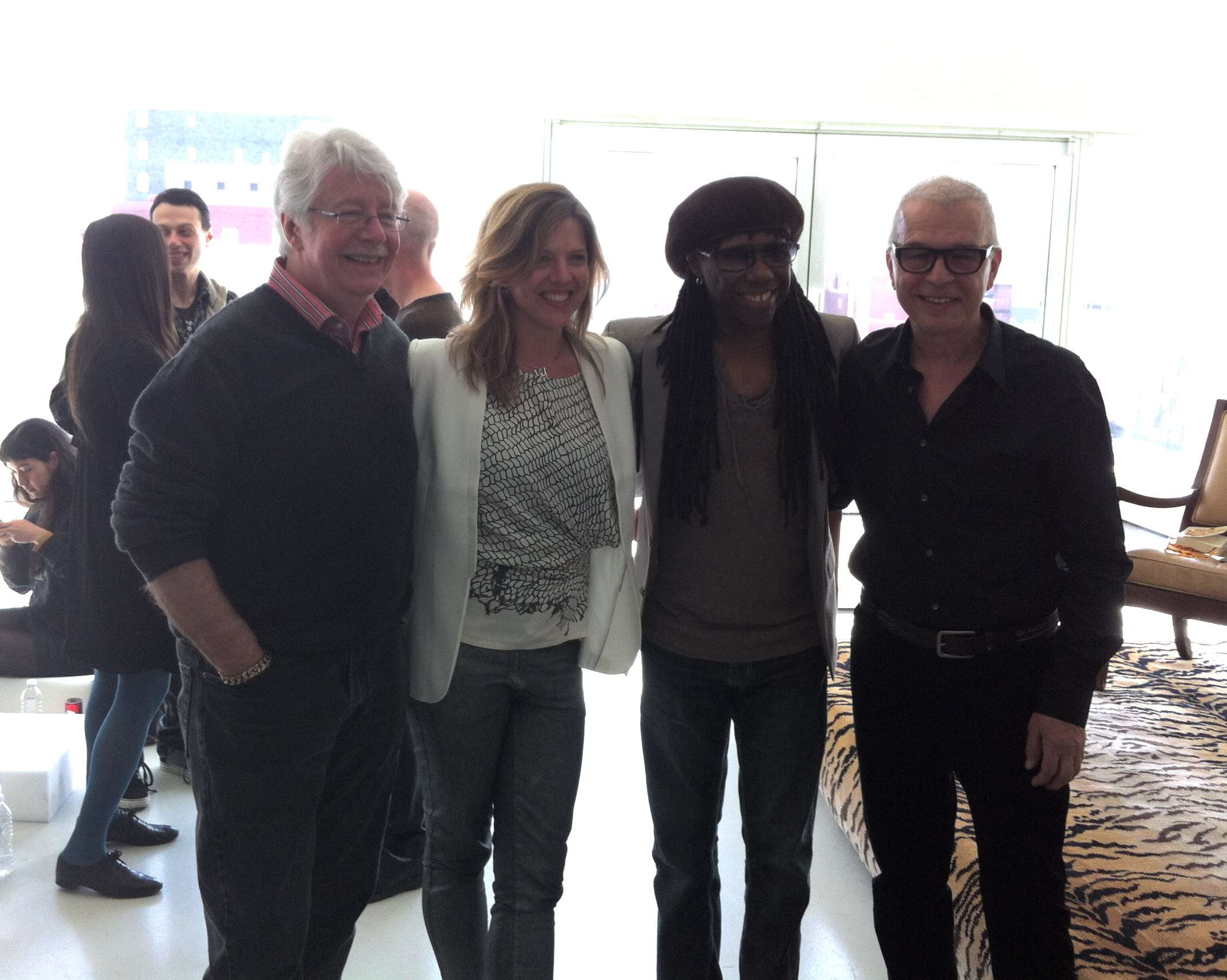 What a day! Together with Red Bull Music Academy, CAS hosted a DavidBowie Special where we presented three listening sessions of David Bowie albums preceded by an interview with each album’s producer. It started with Ken Scott and “The Rise and Fall of Ziggy Stardust and the Spiders from Mars”, then Tony Visconti with “Heroes” and ending with “Let’s Dance” with Nile Rodgers.

For those of us who attended all three David Bowie listening sessions its safe to say we felt closer to David Bowie both as a musician and a person. One thing that shone throughout all of my interviews with the producers was Bowie’s consummate professionalism. When he was in the studio, he worked quickly and got the job done. He was a grafter and didn’t  bring his characters into the studio but saved his various personas for the press and the stage. This relayed first-hand experience of working with the artist certainly brought us deeper into David Bowie’s musical world. Here are the highlights…

Producer Ken Scott did not think Bowie was going to be a massive star when he first met him in the late sixties, but when he heard the demos for “Hunky Dory” he was mightily impressed and knew this guy was going to go somewhere. “Hunky Dory” is the first production credit for both Bowie and Scott and as soon as that was in the can (but before it was released) they were recording “The Rise and Fall of Ziggy Stardust and the Spiders from Mars”.

Bowie didn’t dress up or act much like Ziggy during the recording process but got down to business. Scott was always impressed with his vocal performances which were true performances often recorded in one take without having to “punch in”. He even played us Bowie’s acappella of “Five Years” where he is nearly crying at the end. A hair-raising moment.

“Ziggy’s and Bowie’s gender bending stood in proud defiance against the overtly hetero cock-rocker posturing which dominated early seventies rock. However, Ziggy’s outrageous outfits and outre behaviour were backed by true musical and theatrical genius. The persona may have been carefully constructed artifice but it was the prodigious talent that spurred the dispossessed, the people who didn’t quite fit in, to loudly and proudly identify with Ziggy.

Ziggy inspired and continues to inspire people to enact their own vision of themselves and to pursue the people they would like to be, irrespective of social conventions. This is why Ziggy still matters to us today. Conversely, the icon started to take over his creator’s own personal identity and as Bowie became more and more consumed by Ziggy, he realised he would have to kill him off.

Ziggy succumbed to ‘Rock n Roll Suicide’ (or was it murder?) and David Bowie was free to embark upon creating other personas and more importantly, a massively significant body of work up to this day (and “The Next…”). But in another sense, Ziggy did not truly die at all, as his character is immortalised in the grooves of this album forever.”

Tony Visconti has worked with David Bowie since the late sixties through to the present day and has produced twelve of his studio albums. He told us how he brought his newly purchased harmonizer to the album and what is was like using Eno’s “Oblique Strategy” cards. Visconti relayed what it was like working in Berlin’s Hansa Studios which was near Checkpoint Charlie and also how the city’s people and nightlife provided a wonderful atmosphere to the recording of the album.

Visconti said Bowie’s voice was one of the loudest he has ever worked with and told us how he recorded the vocals for the anthemic title track. He set up three microphones with varying distances from the singer with electronic gates so that they would kick in as Bowie’s voice got progressively louder. Then he played us Bowie’s full acappella version of the song. Hair-raising moment number two.

“‘Heroes’ was released during the height of punk rock, a movement that was partly inspired by Ziggy Stardust and his outlandish attire and antics. Even the names Johnny Rotten and Siouxsie Sioux were redolent of Bowie’s most famous persona. But Bowie himself had already moved on. He recognised the punks as his children, but also reprimanded them for creating a style tribe that had strict uniforms and protocols.

Bowie did not want to play by rock and pop or even punk’s rules. After the release of ‘Heroes’ he told Melody Maker, ‘I feel incredibly divorced from rock and it’s a genuine striving to be that way.’

The Berlin Wall looms large over this album both literally and figuratively. Tony mentioned what it was like working in Hansa Studios located near Checkpoint Charlie and the atmosphere is cast over the music. But the wall could also represent Bowie’s break from his past and his desire to continue to push forward into new musical territory. Change has been the constant throughout Bowie’s career.

The title track sums up Bowie’s belief that we must each create and follow our own path and that we can all be heroes, even it its just for one day. He may have yearned for a rock hero in ‘Hunky Dory”s ‘Song for Bob Dylan’, created one with Ziggy Stardust and his other personas only to case them aside. But with ‘Heroes’ he bestows that power upon each and every one of us. And although he was trying to divorce himself from rock, he inadvertently created one of its greatest anthems.”

Nile Rodgers and David Bowie met at a turning point in each of their lives. They were both without a record deal, in Rodger’s words his own last few albums had been flops and Bowie wanted Rodgers to help him make hits. Bowie played him his ideas, Rodgers came up with new arrangements and put together a bad-ass band and they went into the Power Station to record what for Rodgers was the easiest album he had ever done. In the words of Rodgers, they recorded it like a ‘Black Record’, on strictly budgeted studio time and with a high caliber of musicianship to make it possible.

Rodgers played his guitar to give us an idea of what the title track sounded like after Bowie had written it and demoed it for Rodgers. He then played how he re-arranged the song (hair-raising moment number three), bringing the chorus to the front to make it a hit. After all, this is what he had to do with Chic to immediately hook people in (‘aaaaaaah freak-out!’).  He also showed us how Rufus’ ‘Sweet Thing’ provided inspiration for the hook to his new arrangement of the Bowie and Iggy Pop-penned ‘China Girl’ which ensured its hit status. Our CAS session replay was the first time Rodgers had heard the album since it was released and after three decades, he looked back and said although Side A had all of the hits, Side B was more like an art-pop album. We concur.

“‘Let’s Dance’ is a particularly special album to me as it was the first David Bowie album I bought in the year in which it was released. I was 15 years old and had just started collecting records but only had ‘Changesonebowie’. I knew some of his earlier radio singles but once I heard ‘Let’s Dance’ I knew I needed my own vinyl copy. I listened to the album over and over again and it inspired me to investigate his entire back catalogue.

I bought every Bowie LP I could get my hands on and fell in love with ‘Hunky Dory’ through to ‘Young Americans’ through to ‘Low’ and ‘Scary Monsters’. As my teenage tastes grew increasingly obscure, artsy and and underground, I turned my back upon ‘Let’s Dance’ because of its massive commercial success which did not sit well with the image of mystery I was presently culling.

However, I recently rediscovered ‘Let’s Dance’ and now know I was right the first time around. With ‘Let’s Dance’ Bowie returned to his modernist roots, recalling his youth when he frequented American jazz and blues clubs in London and started learning saxophone. He told Rodgers he wanted this to be a singer’s album and was inspired by jump blues. In a strange way he was both breaking from and aligning himself with his own musical past.

The interesting thing about ‘Let’s Dance’ is that even though it had massive commercial appeal and was Bowie’s biggest-selling album, the songs are not blatantly formulaic pop hits. There were not many 1983 hits singles that featured horn solos with Coltrane-like runs or pounding Little Richard piano.

‘Let’s Dance’ is a truly clever album and while it may have looked back to earlier musical forms, the synthesis with modern pop music was forward-thinking and in tune with Bowie’s position as a pop pioneer. And thirty years later, I know commend myself upon my teenage tastes.”

Thanks to Michael Tapp and Lainna Fader for the use of their lovely photos. Thanks to Audio Note and Robert Lighton for the magnificent analogue sound system. Thank you to Ken Scott, Tony Visconti and their respective teams for their participation. And thanks to Red Bull Music Academy for helping make this happen.

Check out the CAS Shop which features prints of David Bowie album covers signed by Bowie himself.