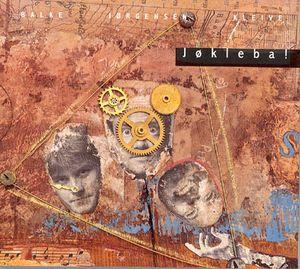 Norwegian musicians Per Jørgensen, Audun Kleive and Jon Balke all have an impressive track record to look back on, whether we’re talking about respective solo works or any of the many partnerships they have had with other artists. Yet it is hard to find an equal to that very special expectation that settles in the air every time the guys, at irregular intervals, turn limbs into the three-headed troll with the acronym Jøkleba. The rare gatherings are marked with exclamation points and seen as major events certainly not be missed.

Their open and playful, often humorous and intentional reckless attitude to instrumentation and the musical craftsmanship has made its mark in the generations that have come after and inspired to free improvisation and new tonal exploration campaigns on the Norwegian jazz releases into this millennium.From they established themselves with their debut in 1990, the critically acclaimed album ‘On and On’ (Odin Records), the trio has been seen as one of the most unpredictable jazz ensembles the Scandinavian scene has in its inventory.

Fabled one off happenings, such as their legendary concert at Vossajazz in 1991, or their slamming ad hoc concert at the same festival exactly 20 years later, when they at short notice stepped in for Dave Holland who had to cancel the opening night, has also become a part of the storytelling and mythology around Jøkleba.

Of course it’s not random choices that makes us gather around the groups second album, ‘Jøkleba!’, in artist Lars Ellings beautiful studio in a backyard in Grünerløkka in Oslo this Sunday. The album has been highlighted by many as one of the best Norwegian jazz releases ever. When Jazznytt Magazine launched its “all-time top 50” list last fall the classic did indeed find its natural habitat among the chosen few.

In addition to Lars Elling, who is the man behind the cover design, we have with us the guy who secured himself the original graphic image, just before he started the club Blå and got himself known through the nickname “Uncle Blue”, now chief-in-command for the norwegian savings bank foundation Sparebankstiftelsens’s new culture hub “Sentralen” in Kvadraturen, Martin Eia-Revheim. Together we take a chat about the album with our main guest for the night, Jon Georg Balke himself, before leaning back and listen through the album from beginning to end.

Although for tonight’s presentation we are basing on the original album release, published by Ivar Dyrhaugs Norsk Plateproduksjon and Odin Records in 1992,it is only natural we squint and relate to a later release that partly is based on the same material. Nearly five years ago the master tape from the original recording from Nidaros Studio was provided a real spa treatment and re-launched with additional tracks of unreleased song material from the period 1995-1997 on the double CD-box ‘Jøkleba! / Nu Jok?’ (Emarcy Records, 2011).

Facilitated by producer Bjørn Nessjø, hifi provider Duet Audio and the exceptional Norwegian cable puller Midas Reference all is prepared for the closest near-‘Jøkleba!’-experience possible, on an soundsystem so delicious that you probably never have heard anything like it.

Be quick to secure your tickets early for this one as the studio is limited to 50 people.

Classic Album Sundays Oslo and Motorpsycho on ‘Angels and Daemons at...