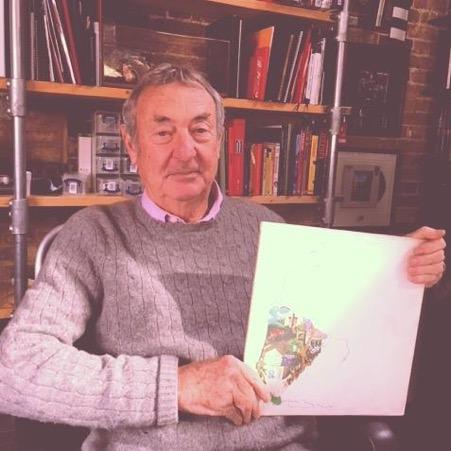 “I love this album just because I do…..great songs and really well performed.”

“Flora has the most beautiful voice with a 5 octave range and she uses it like an instrument.  This is her best album and her music is a massive influence on both myself and ACR.”

“Nina Simone’s voice is draped in sorrow, hope, darkness, light. Her records span the heavens and her light continues to shine. And on those dark days, that inevitably come, her music saves me.”

“I’m well known as a Luddite in terms of appreciating new music… the proud battle cry being, ‘I’ve no records in my collection made since 1980.’ While not being entirely true, it does take a truly extraordinary album to join the likes of Pet Sounds, S. F Sorrow, Their Satanic Majesties Request, Led Zeppelin 2, Abraxas, etc, etc. This is one such record.. beautiful, fragile, dark… dripping with emotion and as melodic as it gets – with instrumentation stripped down to the core this is one of the bravest and most perfect albums ever made – and gets a LOT of play round at Sensible mansions.”

“Sue Tompkins reinvents lyrical language on Life Without Buildings’ Any Other City. She is a vocal gymnast who performs with enthusiasm, creative flow, and a complete disregard for her audience understanding every word she says. Most of her lyrics feel like inner dialogue that consistently changes topic, and her most potent phrases can stop you in your tracks: “holding you is like the new past,” “do we need order?”, “break my mind”. Her spoken-word style can make any phrase sound exciting and fun, inspiring you to care less about its meaning and be amazed at how many vocals tones she can take on. The band around her properly balances her out with melodic and shape-shifting instrumentation and tight chemistry. Any Other City is an addicting listen for those who can comprehend the band’s complicated joy.”

“A fine keyboardist, producer, vocalist & composer. Patrice Rushen aka Ms Nimble Fingers is up there with Prince, MJ, Quincy Jones + Herbie Hancock.  Being a trailblazer of jazz, disco/r & b since 1973, this First Lady of the good grooves still has the funk. Salute!”

“The single ‘Typical Girls’ is one of my all time favourite tunes, and this album is full of great songs: ‘Self Destruct’, ‘New Town’… so much vitality, originality and attitude.”

“Ms Baker concentrated on pure, perfect love songs, with a voice so flexible but so beautifully dignified . Every song on this LP displays craftsmanship to the Nth degree –everything is right: the timeless elements of pure song, heartfelt words~~exquisitely sustained passion.”

“Named after her mother, KALA saw M.I.A. travel the world to collect sounds and instruments – like the urumee drum from Tamil Nadu. As a British Asian myself, her kick-ass approach is eternally inspiring.”

“The Spice Girls were revolutionary for 3rd wave feminism: popularising it as ‘Girl Power’ put it back on the mainstream map, albeit commercialised, and enabled it to develop into feminism today.”

“Robert Flack’s 1969 debut album First Take is the soundtrack that we need right now. It touches on political struggle, breaking with society norms, and divisiveness. It couldn’t be more timely or more beautifully rendered by Flack’s emotional delivery. It gets me every time and perfectly exemplifies the transformative power of music.”

“This album meant lots to me through college and Uni. Anger, intelligent lyrics and sex all rolled into great songs that you could really shout or whisper to. This album has teeth and was made for CAPS LOCK!”

“I bought this album when it was originally released in 1974 it’s still one of my all time favourites. A superb blend of funk/soul. There are so many great songs on this album which includes “Stop on By” co-written by the great Bobby Womack.”

“She is a great artist and I feel this album is so beautiful.”

“In the early 90s Lush challenged the male-dominated indie world with noisy dreampop that was both achingly gorgeous and tough. No one’s ever really matched their sound. The melancholy guitars and cascading harmonies still transport me when I put Gala on.”

“My album is Ibeyi – I love that it’s sisters, I love that their vocals embody their African and French Heritage, Just simply gorgeous music by strong, beautiful women!”

“A mini album with exotic and dreamy songs that has my same age. As a child I used to listen to some cassettes of the first DJs and I fell in love with some of the songs contained in this album that I have been looking for for many years, in the pre internet era. Until an historic DJ I know played Bye Bye Papaye during a party in a club …”

“A welcome return to music making by Alison after a very long break.
Wonderfully produced by Will Gregory, it contains 10 tracks, 9 of which are given ladies names, including the truly haunting Annabel, about the Kathleen Turner book of the same title. While it did not work with all their fans, being musically ‘different’ from their usual fare, for me it is a true musical masterpiece.”

Kira Grunenberg (Music writer) : I’m With Her – See You Around

“I’m With Her is a natural blending of three women who have always celebrated one another’s individual musicianship, making See You Around feel that much more exciting and worth celebrating as well.”

“When I first heard Beyoncé’s Lemonade I actually watched it online in a link my friend sent me on Facebook. Beyoncé had previously released a self-titled album called Beyoncé with no warning, accompanied with visuals for every single song, and so I was excited to see if she had done it again. Though the album Beyoncé had first shocked and disappointed me because of the content in her lyrics and her new chosen artistry, I ended up being hooked to the songs on that album and I wondered how this new album would be. As I watched the visuals to Lemonade I realised that she was going to be presenting the songs in story mode and I was really excited to see how each song would come into the story and what it would sound like.

As I was hearing the album revealing itself I knew she had taken another step in style and artistry. She had done a different style once again from Beyoncé and her lyrics and melodies were cool and new age even more than before, as I would have expected. The theme followed the story of pain in love and it seemed to tell a story about her marriage. Some of the songs had stuck out to me more than others and I was hooked on the story that was developing. I found myself really intrigued at how she was expressing herself as a woman so vulnerable and at the difficulties she was portraying to be going through in her marriage. She made herself look and sound vulnerable and at the same time strong and ultimately unbreakable. Though her songs told of how love could break you it also told of how attitude can raise you above that. Though I enjoyed each song for different reasons, because of emotion and style, my favourite was “Don’t hurt yourself”. Her attitude and style was so captivating and I wanted to embody that energy. She was telling her husband, who she was threatening in the song, that he better change his ways otherwise she will make decisions he couldn’t come back from. But she did this with so much style and emotion and portrayed someone who really was as strong as she sounded. The rest of the album had similar themes in attitude and my second favourite song was “Hold up” for those same reasons. I’m still not sure what her intention was when she wrote the album, was it to say it’s ok to try at a failing marriage when he cheats and treats you badly? Or was it to say, look how strong women are after going through all this pain with the men they choose to love? Or was it just a portrait of her experience in love? Either way it was a captivating piece of work and it embodies strength, and influences it too.”

“I adore this, PJ Harvey’s blues-infused album, it is intangible and mysterious. I just can’t get enough of it, and it reveals new layers and profoundness each time I listen to it. It is raw and heavy, yet seductive and playful. Simply beautiful! There is some dark undercurrent about her music that haunts the air after playing. PJ Harvey is real, she tells women’s stories, from women’s perspectives. It is like she murmurs softly in my ears.

Huge fan of her early 90’s albums (Dry, Rid of Me, 4 Tracks Demo), when To Bring You My Love came out, I had to let go of stuff to be able to embrace it fully. It was like a reinvention. This album always takes me on a journey, inviting to move beyond physical concerns, exploring a place where love and desire turn mystical. Pure transcendental bliss.”

Transmission Records in Margate (Behind The Counter Episode 1)