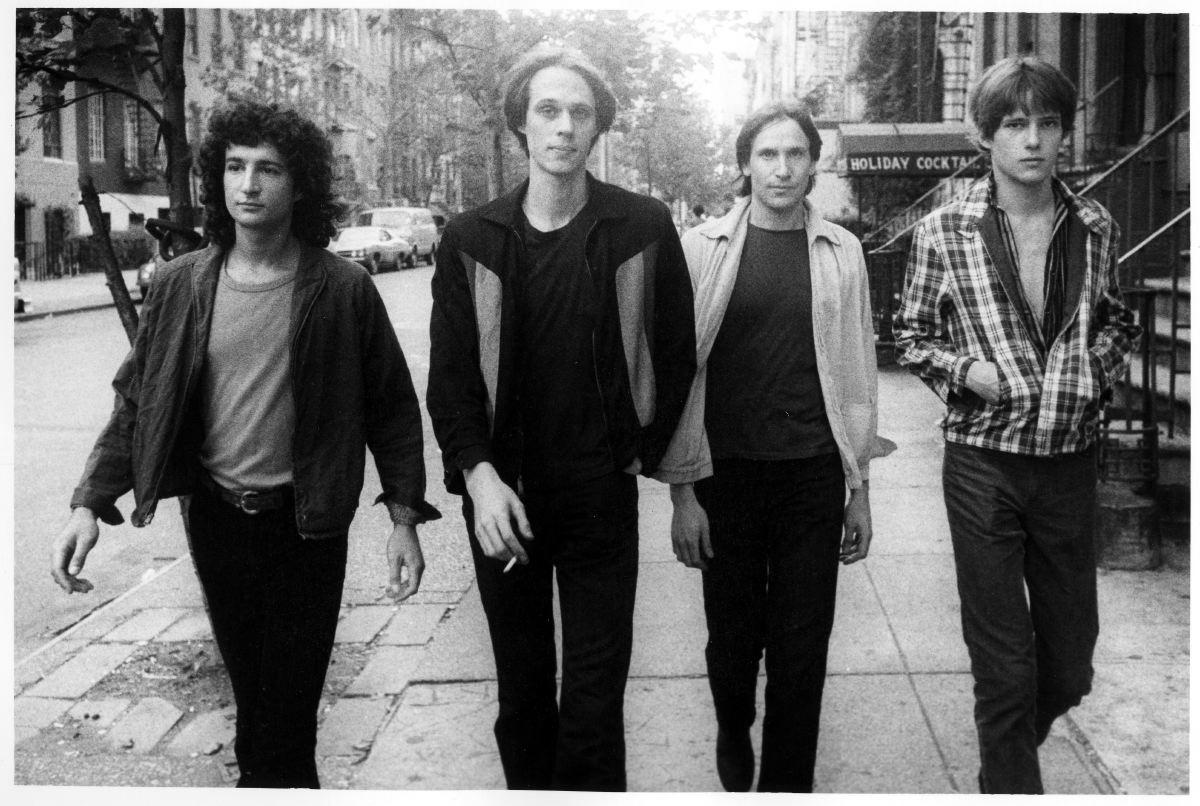 “The most original band I’ve seen in New York. They’ve got it.” – David Bowie after seeing Television play at Club 82

“Television will wipe out the media.” – Patti Smith 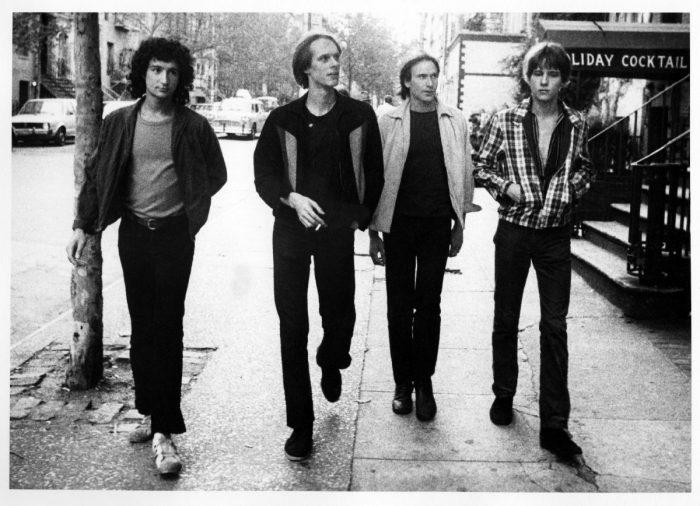 Television are often hailed as one of the progenitors of the punk movement but their sound eventually developed in a direction that was not obviously ‘punk’, a move which ultimately may have hindered their commercial success. In their early days as The Neon Boys with Richard Hell as bassist, Tom Verlaine on guitar and drummer Billy Ficca, they unleashed a more rough-around-the-edges garage rock sound a la Nuggets melded with an experimental edge ciphered from the band that revolutionised rock as we now know it, The Velvet Underground.

A couple of years later, after recruiting Richard Lloyd as second guitarist, they may have seemingly rejected the glam rock movement that was all the rage for that moment, but the New York Dolls’ sense of rebelliousness and urbanity, if not their dress sense, seems to have seeped into the band’s musical consciousness, as did the prevalent cabaret and poetry scenes.

The catalyst that credits Television as heralding in the punk era has more to do with their sense of place and timing rather than their sonance. Later playing Max’s Kansas City, they were the first band to have a residency at CBGB’s, now recognised as downtown Manhattan’s underground music mecca. They convinced owner Hilly Kristal to give them a regular gig at his new spot (the acronym of which stood for country, bluegrass and blues), allegedly helped build the live venue’s stage and soon developed their own cult following. 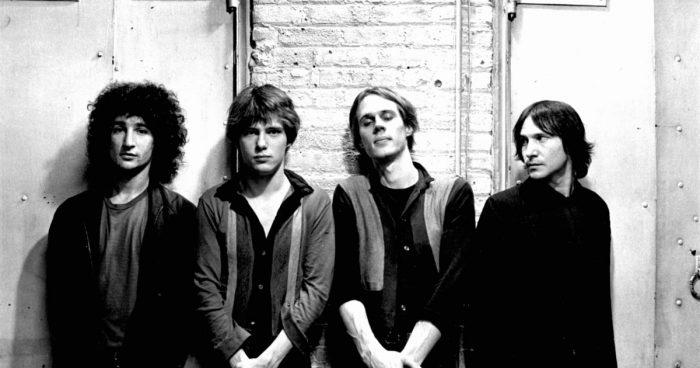 The band and its members wove themselves into the fabric of downtown music. Brian Eno produced demos while the band were being courted by Island Records although this failed to result in a signing. Hell’s frantic stage antics began to seem increasingly out of sync with the other band member’s growing musical virtuosity and eventually the band refused to play his songs. This led Hell to leave and form The Heartbreakers featuring former New York Dolls Johnny Thunders and Jerry Nolan.

Hell was replaced by former Blondie bassist Fred Smith and Verlaine recalled, “At the first rehearsal me and Lloyd were looking at each other and thinking, ‘God this is a real relief’. It was like having a lightning rod you could spark around. Something was there that wasn’t there before. Fred could follow stuff. I remember starting up in the longer songs and being able to do stuff that wouldn’t throw everybody.”

Another early CB’s and Max’s stalwart was Patti Smith who had a soaring talent matched with a relentless drive that propelled her to be everywhere all at once. She performed for and wrote with playwright Sam Shepard, roomed with photographer Robert Mapplethorpe, recited her poetry with the St. Mark’s Poetry Project, wrote songs for Blue Oyster Cult and took a turn in rock journalism writing for Rolling Stone and Creem. Like Verlaine, she was inspired by the poetry of Arthur Rimbaud, and this passion helped unite them both romantically and professionally. 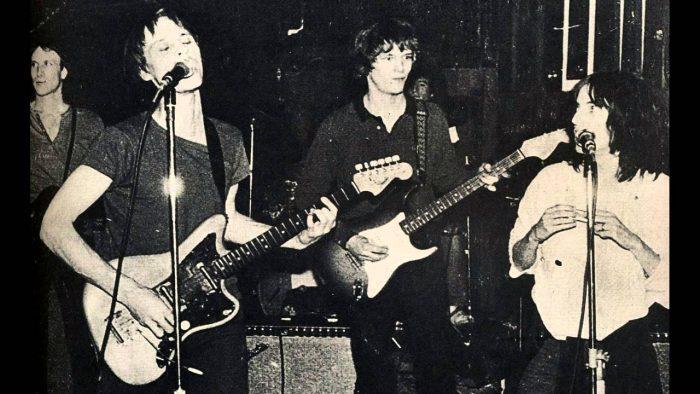 Smith championed Television as the real deal; authenticity in the face of a penchant of style over substance. After experiencing Television live at CBGB’s she wrote, “As the band played on you could hear the whack of pool cue hitting the balls, the saluki [Hilly’s dog] barking, bottles clinking, the sound of the scene emerging. Though no one knew it, the stars were aligning, the angels were calling.”

Smith’s championing of the group, her unique form of PR and her alliance with Verlaine helped grow Television’s fan base possibly more for which she may have been given credit. And of course Smith also enjoyed kudos and support flowing from the other direction. She formed her own group with Lenny Kaye and for her first album ‘Horses’ recorded ‘Break It Up’, a composition she penned with Verlaine.

The growing significance of the downtown music scene saw A&R scouts flocking to the Bowery and many of the acts such as The Patti Smith Group, The Ramones and Blondie were getting snapped up by the major record labels. But despite being courted by Island Records and being touted as the forefathers of the now critically hailed CB’s scene, Television were still waiting to get signed. Ramones manager and downtown kingpin Danny Fields lamented, “Why are the labels so slow in grabbing Television? Everybody raves about how great the Velvet Underground was, and here is another great New York band that musically picks up where the Velvet Underground left off.”

However, even groundbreaking alternative underground scenes have their own set of rules, and Television broke nearly all of them. Rather than wait for a record label, Television followed Smith’s lead in releasing an independent single on their friend Terry Ork’s label in the hopes of perking interest. But what they released did not translate into the type of pop-rock-punk single that was making noise at the time.

Instead, they released “Little Johnny Jewel”, a song in two parts that ran seven minutes and had more in common with free jazz. A decade earlier, Dylan’s “Like a Rolling Stone” reached number two in the charts despite clocking in at 6:13, three minutes over the standard pop single. Television would not enjoy the same success. 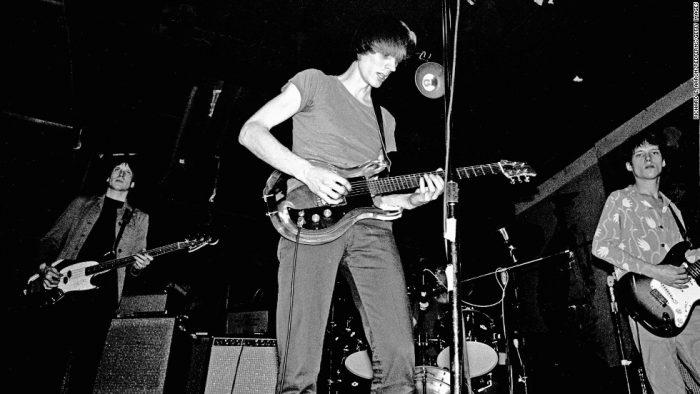 Finally, Television signed to Elektra Records and released their debut album ‘Marquee Moon’. By the time of the record’s release in 1977, punk rock had somewhat become a caricature of itself and thankfully Television did not follow suit. Onstage they had a similar snarl, but rather than performing theatrical stage antics in the manner of The Sex Pistols, Television preferred to remain cooly detached from their audience.

They also benefitted from years of developing their unique musical style through their live shows and the record revealed a confident artistic maturity not often found on debut records. Unlike many punk musicians, they were not embarrassed to play their instruments well, slipped in references to jazz, prog rock, and psychedelia with lengthy solos and elected a cleaner, more sophisticated sound. Inject this musical fusion with lyrics that revealed literary prowess and a love of poets Rimbaud and Paul Verlaine, and we may be able to understand why Television puzzled audiences.

The album was not a commercial success, selling only 80,000 copies in the USA. (That ‘only’ is put into context when we consider that 2013’s top selling vinyl album in the USA was Daft Punk’s ‘Random Access Memories’ with 49,000 sold. Oh how times have changed.) Alas they followed in the wake of some of the groups to which they paid homage, VU and Love, and other massive talents such as Nick Drake, in that their popularity and significance grew after they stopped recording. Like Arthur Russell, another cross-pollinating artist from that era’s lower Manhattan music scene, Television’s blended sonic styles drawing not only from rock but also funk and the minimalism of Steve Reich. This breakdown of musical boundaries has since become a defining characteristic of ‘Downtown Music’.

However, at the time this characteristic was not exactly a selling point. It may be the case that not fitting nicely into a particular ‘scene’ during their recording career bode Television well in the long run. ‘Marquee Moon’ boasts great songs with memorable hooks and clever lyrics but does not clearly reflect a stylistic era or a singular musical style. This lack of clear identity may have been the reason Television did not make the same noise as many of their counterparts but is the very reason their debut is shrouded with a timeless quality. ‘Marquee Moon’ may be better appreciated from afar warranting its status as a classic that only gets better with age.

The quotes above are pulled from Bryan Waterman’s book ‘Marquee Moon’, part of the wonderful 33 1/3 series of publications.