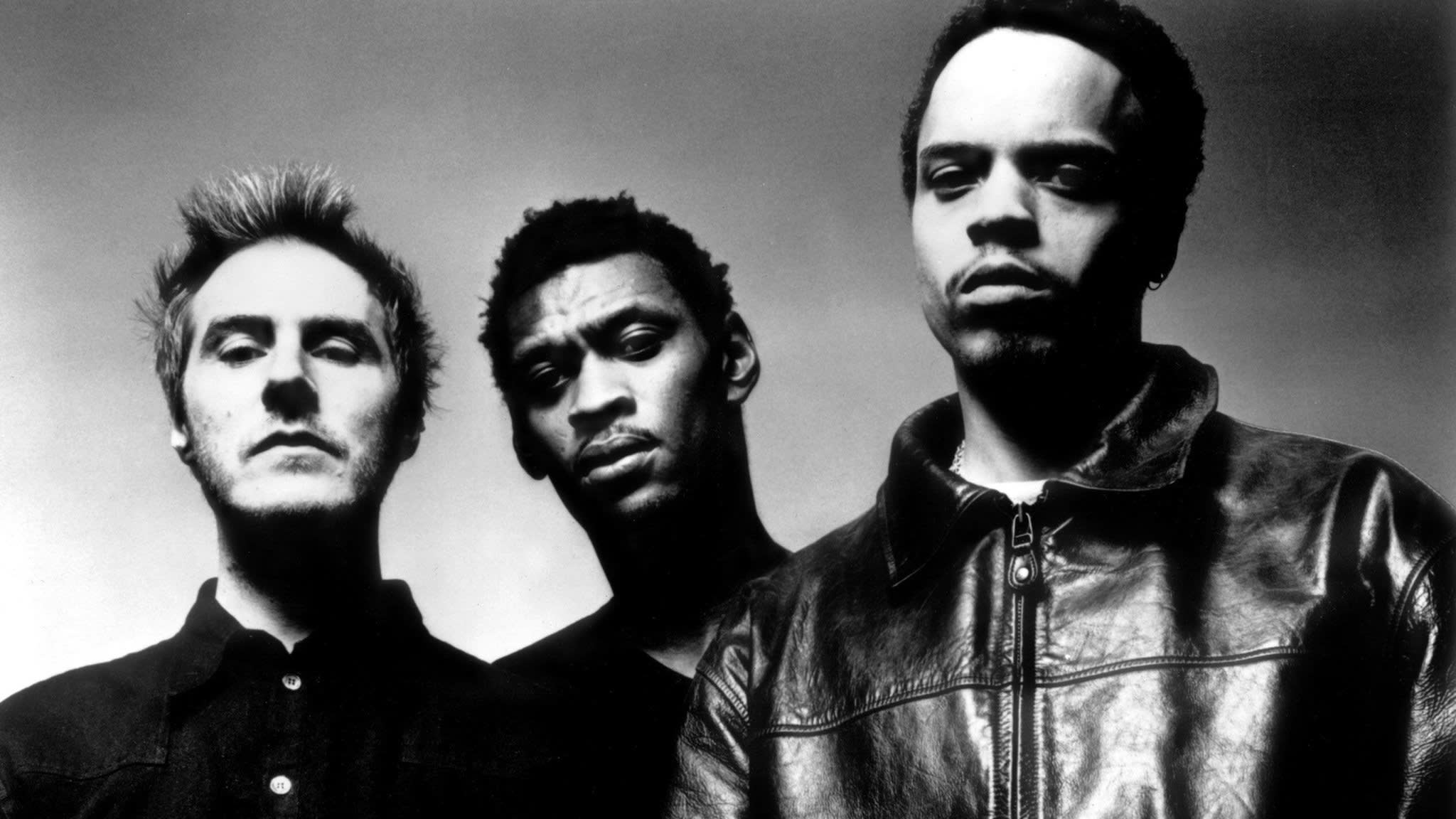 The predator that lurks on the cover of the album perfectly represents the moods locked in the album – it’s in-your-face, confusing, demonic, and eerie. It’s startling at times and soothing at others. Fear is a difficult emotion to surface from the grooves of a vinyl record because it lacks a visual— the discomfort you experience while listening can only be crafted with the help of your imagination. Massive Attack makes you think about what you would see onscreen during a Tobe Hooper or Alfred Hitchcock film. And, when Massive Attack did give their songs a visual representation, they surface the unexpected, like a foetus singing “Teardrop” from inside the womb and from their respective music videos. 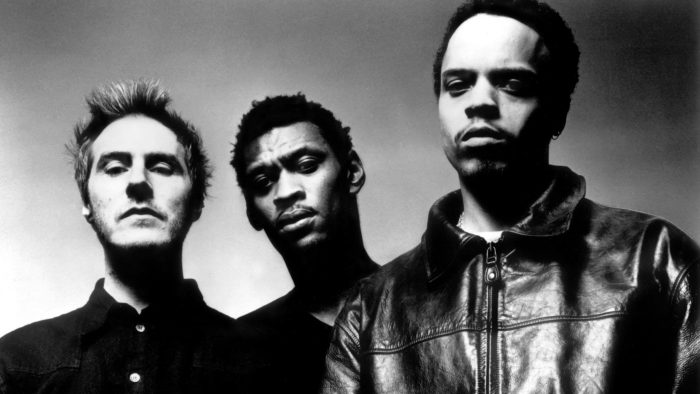 The birth of Massive Attack wasn’t originally set to test these fearful boundaries, but to revamp the atmosphere of underground UK dance clubs. Before Massive Attack, Robert “3D” Del Naja, “Daddy G” Marshall, and Andy “Mushroom” Vowles produced music with the electronica collective, The Wild Bunch, where they achieved great success from singles like “The Look of Love”. Eventually, the trio left the group to form Massive Attack and independently released their first single, “Any Love”. The track is upbeat, happy-go-lucky and bursts with sunshine, which can be off-putting if a listener knows the band from their full-length output.

Their first album, Blue Lines, takes this idea and infuses influences of reggae, soul, funk, psychedelia, jazz, hip-hop, and electronic music with a brooding mix. The foundation of the album was built mostly from vinyl samples, along with contributions from guest vocalists and rapping delivered by 3D, Daddy G, and Tricky, a frequent collaborator of the group during their first two albums. Daddy G described their music as “dance music for the head, rather than the feet,” which is accurate given the multitude of beat changes made within each song. The album also gives off a more chilled-out and cool vibe compared to US hip-hop releases of the time, like N.W.A.’s Straight Outta Compton and De La Soul’s 3 Feet High And Rising. Blue Lines took the ideas outlined in American hip-hop and adapted them to fit the other-worldly chaos and British influences, which gives the album its distinct urban grooviness and mysterious lyrical content.

In many interviews, Massive Attack often describe themselves as three distinct individuals who consistently change, so their follow-up to their debut was bound to be foreign to whatever they had done before. Protection, features more chilled-out and spacey arrangements than Blue Lines. While 3D and Daddy G contribute fewer verses here to accommodate the vibe of the album, the album showcases beautifully clear vocal contributions from Horace Andy, Tracey Thorn, and Nicolette. The production is intricate and fragile, especially when it comes to its string arrangements— the electronic-less outro to “Sly” is simply bliss. Protection is an album not as well-suited for the dance floor as it as a late night drive – it makes your mind dance but feels more appropriate for floating on a cloud.

Protection can be seen as the band’s greatest collaborative effort up to that point, but it also symbolizes the moment when Massive Attack began to fall apart: Shara Jones departed from the band before the album’s production; their producer and co-producer moved on to work on Neneh Cherry; and Tricky, who was the most-celebrated collaborator on Protection, discontinued his involvement with Massive Attack to record his widely-successful solo debut, Maxinquaye.

Mezzanine feels like an abandonment of everything Massive Attack was known for at the time, considering the great success they achieved with their dance-oriented songs. After touring both of their albums extensively, the band started to become disconnected, and creative differences changed the way they produced their music in the studio. Each member wrote their contributions for the album in solitude and sometimes avoided contact with each other to refresh their creative drives. If you think about it, it’s similar to how Outkast composed Speakerboxx/The Love Below, but Andre 3000 and Big Boi frequently collaborated and critiqued each other’s music without any animosity during their respective solo recording experiences.

In an interview with Sound on Sound (April 2003), Neil Davidge, a contributing musician and producer on Mezzanine, discussed the hostile and isolated nature of the album’s recording sessions. Davidge recalled how he met with each member of the band individually — as soon as one member came in to work on their contributions to the album, the other would follow suit and exit the room. When the new member arrived, Davidge would be forced to stop working on the current project and transition to another, forcing him to do so at least four times a day. “[It] was a pretty messy way to work,” he commented.

Considering the album was constructed by multiple unique songwriting processes, it’s appropriate to divide the album contents based on each band member: 3D, Daddy G, and Mushroom. 3D causes the greatest shift in Massive Attack’s sound, which is more reminiscent of hard rock musicians Nine Inch Nails and Marilyn Manson. He felt Massive Attack’s live performance inspired his writing style most during the period, where they had to re-appropriate songs they created in the studio for the live stage. There, Massive attack was suited with a bassist, guitarist, and live drummer to add to their electronic instrumentation. 3D creates the scariest elements when he composes his song with these live instruments and an unheard experience on any Massive Attack album up to that point. The band even received a box of multiple copies of the Bibles from an anonymous sender while at their studio.

If 3D devilishly scares terrify Massive Attack listeners, Cocteau Twins’ Elizabeth Fraser, another featured female vocalist, is their angel— her ethereal vocals infuse tranquility and understanding into the air when she sings on the album, similar to the lust outlined in 3D’s lyrics. She composes simple yet gorgeous lyrics for her contributions using her own painful experiences with love as inspiration. They were so sacred to her that she requested to record her vocals in the studio alone— Massive Attack would set up a 16-bar loop, leave the room, and appropriately placed her part over the song’s beat when she was finished.

Elizabeth Fraser’s first contribution to Mezzanine, “Teardrop,” proves why this intimacy was required, where she pens a breath-taking confession to Jeff Buckley, who best known for his highly-acclaimed debut Grace and the son of Tim Buckley. When Jeff accidentally drowned in a channel in Memphis, Tennessee, he was stolen from the world at a high point of his creative genius and a happy place in his life. Fraser had a strong relationship with Buckley and learned about his passing while recording the song with Massive Attack on May 29th, 1997. She commits to expressing her love for him via song, which she writes as “love is a verb, love is a doing word.” While letting one’s guard down and revealing their emotions can be daring, Fraser feels fearless and is prepared to conquer the sadness loaded in such an unfortunate loss. She hopes her art will help strip away emotional weight experienced during a mourning process and make her feel lighter, even though she would rather be filled with the blessing of Buckley’s companionship. 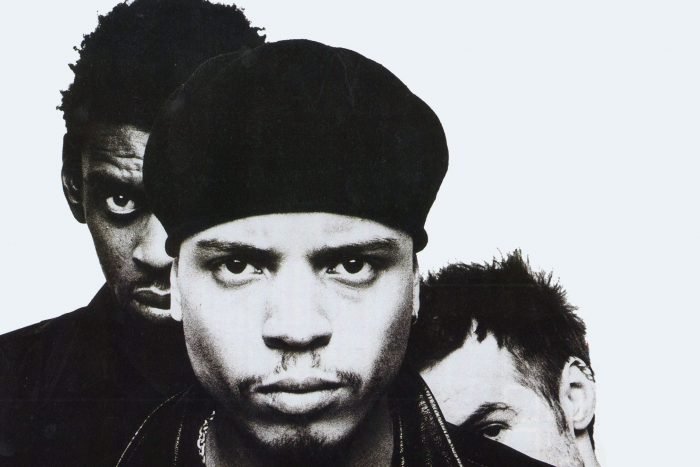 After realizing the direction of Massive Attack was controlled by 3D’s darkness, Daddy G and Mushroom saw similar blooming, black flowers, which inspired them to infuse elements of the band’s dance and ambient-inspired work into the album. Daddy G references his Caribbean roots on past Massive Attack albums and celebrates his ethnicity on Mezzanine with a cover of Join Volt’s “I’ve Got to Get Away”. The cover, which features vocals from Horace Andy, is G’s way of expressing his loneliness in returning to Bristol. The band members discussed how they couldn’t relate to Bristol natives when they returned from touring behind Protection — the band had experienced otherworldly things compared to those who never left the city. Daddy G labels the people who would negatively judge the band for these experience as “the neighbour” in the cover, and Andy sings about how uncomfortable it feels to have their home around this person. At the end of the day, he just wants to “find a quiet place” and recollect himself, but he is left confused and unfulfilled.

For being the only band member not to speak a word on the album, the lyrical content associated with Mushroom’s “Exchange” is striking. In an interview with an unknown journalist, Mushroom said he related to Blue Lines and Protection more than the darker tones of Mezzanine, but because of the division between all of the band members, they weren’t able to collaborate in the same way. He describes this as “seeing a man’s face, but you don’t see his heart,” possibly meaning he felt truly heard during the writing process of the album except for “Exchange”. There was enough negativity amongst them to forget who they really were. Andy responds peacefully to this feud when he sings, “for your heart is your heart, and your mind is your mind– never mix love and hatred.”

Mushroom and Daddy G left the band shortly after the release of Mezzanine, leaving 3D alone to follow up the album five years later with 100th Window. Considering all of the hardship the band experienced during the production of the album, it makes sense that its initial running title was Damaged Goods. Every contributing musician was experiencing their own set of personal problems and sought to solve them through their music, revealing each person is flawed in their own unique way. Mezzanine works just fine as the title, at the end of the day, though. While Massive Attack had found great success in life thanks to their music, they still had to deal with dense issues that controlled their perception of everyday life. By the end of the project, it’s clear everyone makes it safely to the “mezzanine” between good and evil.

Read More: The Uniqueness of Massive Attack by Melissa Chemam

[ Past ] Album of the Month Club: Massive Attack ‘Blue Lines’