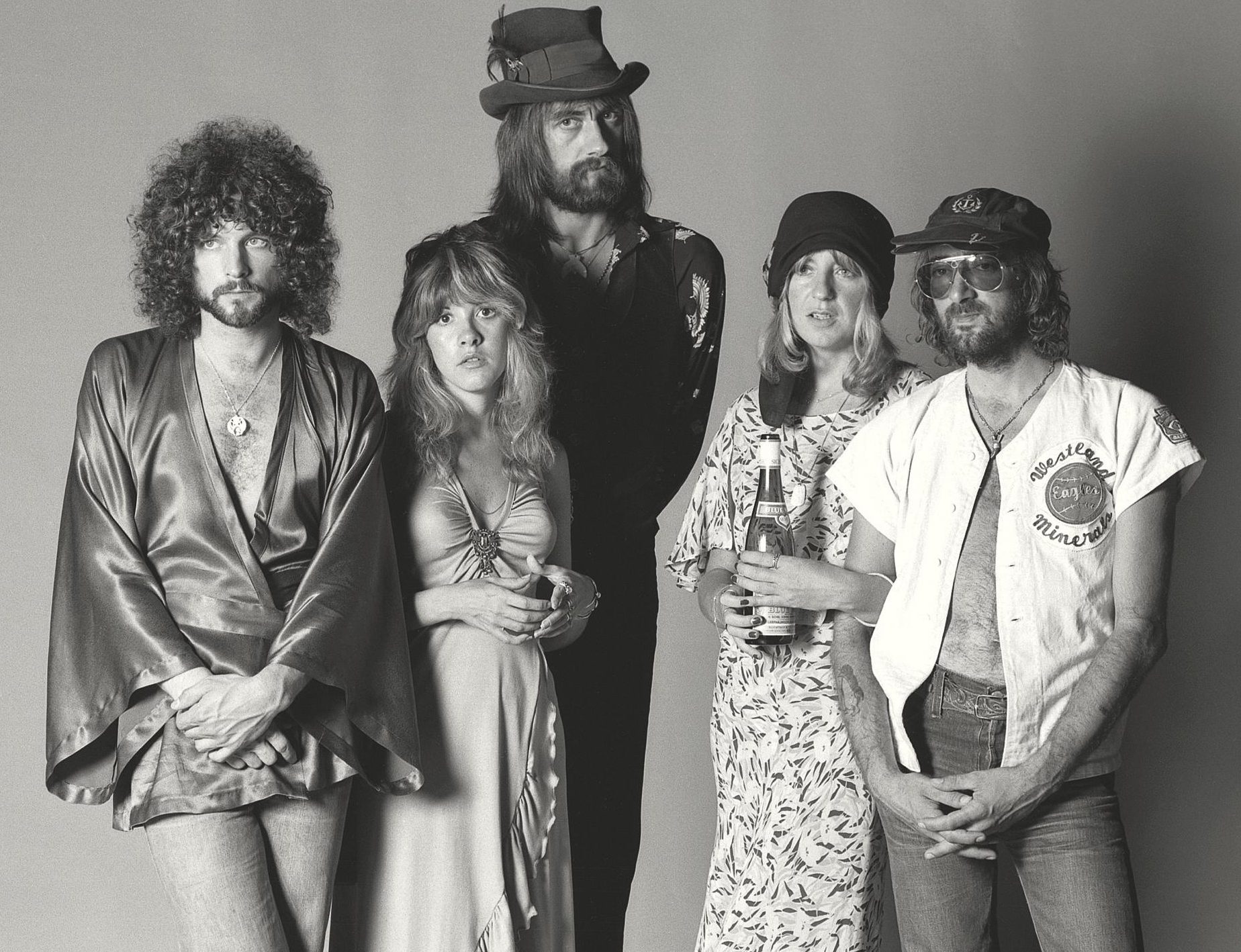 ‘[It would] take us almost a year, during which we spoke to each other in clipped, civil tones while sitting in small, airless studios listening to each other’s songs about our own shattered relationships.’  – Mick Fleetwood 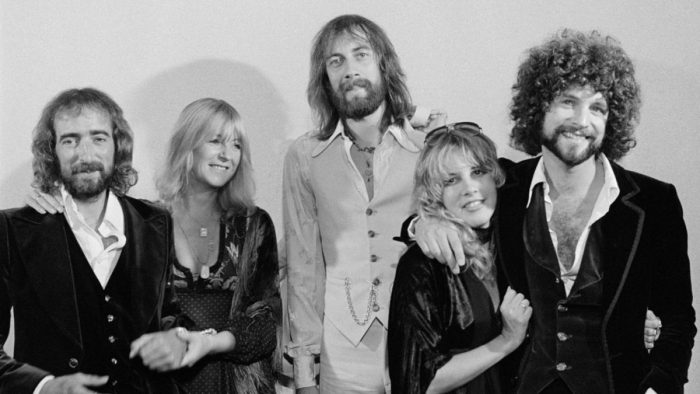 How did a British blues band turn into a California rock outfit that created one of the best-selling albums of all time? In the mid sixties, Peter Green was considered one of British rock’s most esteemed guitarists, lauded by the likes of Jimmy Page and David Gilmour. He was a member of John Mayall and The Bluesbreakers, the changing line-ups of which read like a ‘Who’s Who’ of British bluesy-rock.

Green replaced Eric Clapton who had left with Jack Bruce to form Cream. A year later Green would follow suit, snagging drummer Mick Fleetwood and eventually bassist John McVie to form a new band, convincing them of his serious intent by combining his rhythm section’s last names to form the it’s moniker. An album later, they were joined by Chicken Shack keyboardist and singer Christine Perfect who would later marry John.

The band soldiered on with mutating line-ups that featured guitarists Jeremy Spencer, Danny Kirwin and finally Bob Welch who along with Christine managed to steer the band to a more melodic sound. The band was plagued with problems including Fleetwood’s wife Jenny’s affair with bandmember Bob Weston and their former manager’s claims that he owned the band name which he felt gave him the right to put a fake Fleetwood Mac on tour.

Welch eventually resigned but this opened the door a gorgeous looking and phenomenally talented couple who would help take the band to unforeseen heights, Lindsey Buckingham and Stevie Nicks. Stevie recently relayed the story of why she and Lindsey ultimately decided to join Fleetwood Mac despite the problems they were already having with their relationship.

She recently told Billboard that when they moved to Los Angeles where they recorded ‘Buckingham Nicks’ she was working as a waitress and cleaner to make ends meet as Lindsey didn’t want to sell out playing cover songs at Chuck’s Steakhouse. Due to the pressures they were close to breaking up but as she relays, “When we joined Fleetwood Mac, I said, “OK, this is what we’ve been working for since 1968. And so Lindsey, you and I have to sew this relationship back up. We have too much to lose here. We need to put our problems behind us. Maybe we’re not going to have any more problems, because we’re finally going to have some money. And I won’t have to be a waitress.”

I made Lindsey listen to all the Fleetwood Mac records. And I said, “I think we can do something for this band. We’ll do it for a year, save some money and if we don’t like it, we’ll quit.” And he’s like, “But Buckingham Nicks, I still think the record’s going to start to break out.” I said, “You wait around. I’m sick of being a waitress. We are joining Fleetwood Mac and we’re going to be great.’

In 1975, the new ‘Golden Era’ line-up debuted with the self-titled album ‘Fleetwood Mac’ and this was a breakthrough as it became a US Number One. It included still classic singles ‘Rhiannon’ and ‘Landslide’ and Christine McVie’s ‘Over My Head’ and ‘Say You Love Me’. This new sun-tinged  pop catapulted Fleetwood Mac into new realms of success.

At this time, they had a stellar line-up with the major singer/songwriters with Lindsey Buckingham assuming arrangement duties. Each writer had their own signature style: Christine McVie as the pop princess, Buckingham as the punchy new waver and Nicks as the dreamy Californian poet. Not only could they all sing lead vocals, but they also contributed wonderful harmonies on one another’s catchy and clever songs.

The pressure was now on for their next album to be a massive success. The stage was set for rock’s greatest soap opera. 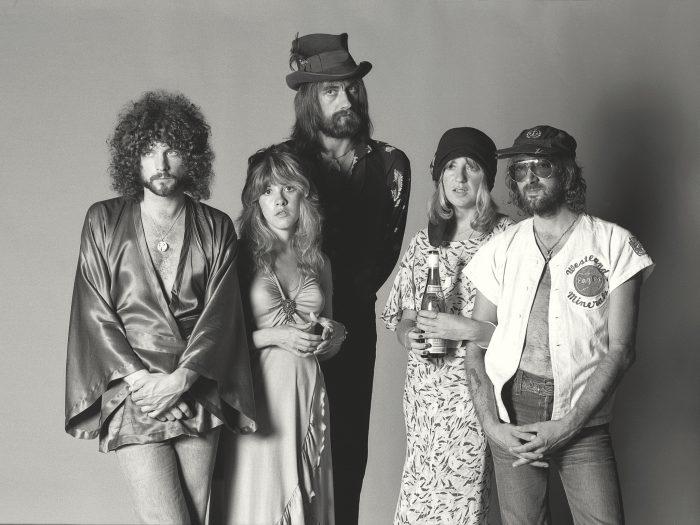 After eight years of marriage, Christine and John McVie were getting divorced due to the constant touring and John’s alcohol abuse. John relayed in an interview, “You got the pressures of being on the road for a start and living together and seeing everybody at their best and their worst. And with Chris she saw me at my worst one too many times, and bless her heart, she said, ‘Enough is enough. I don’t want to be around this person.’ But at the bottom of all the stuff we have something musically we can achieve.” The two avoided on another and didn’t speak unless they had something musical to discuss.

Mick Fleetwood’s wife Jenny Boyd (sister of George Harrison’s wife Patty) had the afore-mentioned affair with former Fleetwood Mac member Bob West on and she wanted a divorce. And Lindsey and Stevie were constantly bickering as their relationship was beyond repair.

Great music often comes from heartbreak, emotional turmoil and living on the edge. In the words of Stevie, “Devastation leads to writing good things.” Lucky for us they made their embittered battles with one another into great songs that will live forever. 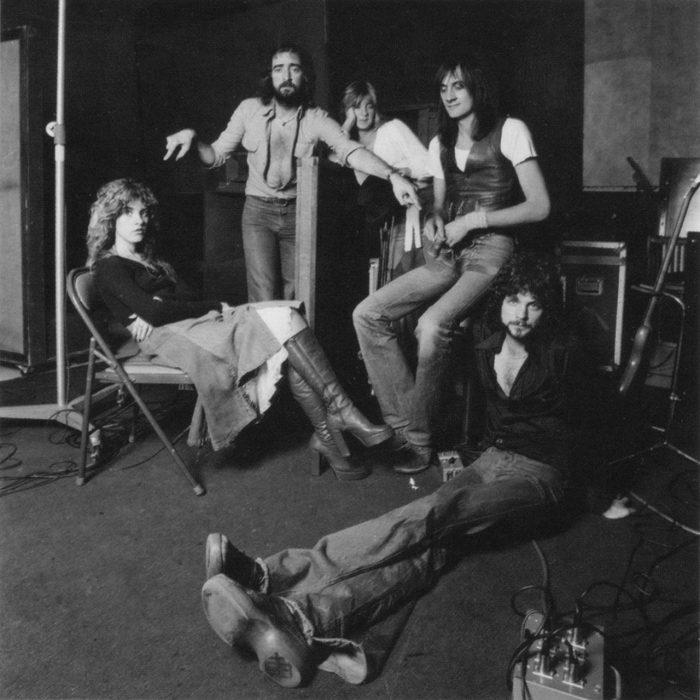 To record, they left Los Angeles to get away from the record company, attorney and all of the other business demands. They sequestered themselves in a windowless studio in Sausalito, California. Their isolation along with the copious amounts of alcohol and Bolivian marching powder on hand did not make for good relations. Nicks recalled, “We wondered whether we would get through ‘Rumours’. In that tiny little room there were five people that were totally breaking up.”

As most of the members were contributing songs, the listener is allowed to hear the drama unfold much as in a play with its cast of characters and their dialogues flying back and forth.

Lindsey took the helm with arrangement and orchestration. He wanted to push Fleetwood’s sound forward with many fresh ideas, but he butted heads with John McVie. Mick Fleetwood musically held the whole emotional stew together with his steady, driving rhythms. 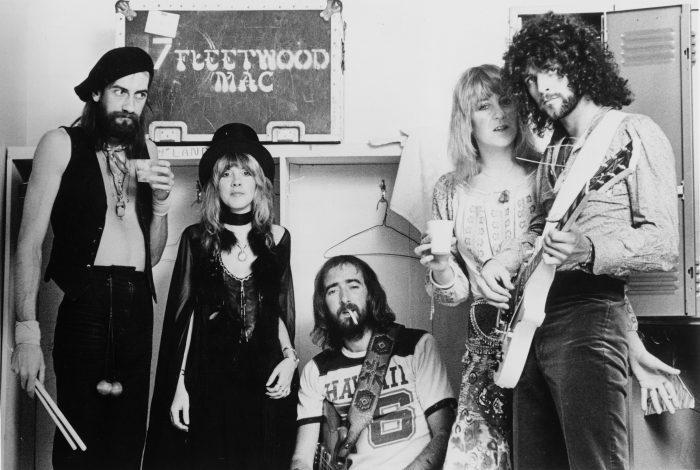 The production was impeccable with its intimate sounds party due to Buckingham’s critical ear. It was also due toKen Caillat and Richard Dashat who had started the project as engineers but as the emotionally strung-out band wanted their feedback they rose to producer status. There were some production problems, the most harrowing of which was tape decay. Because they took so much time to record (they even cancelled a sell-out tour), they were constantly overdubbing on the master tapes. Tape is a physical medium consisting of iron oxide and this flakes off when tapes are rewound and played over and over.

The tapes began to decay and nothing sounded like it had when it was recorded. It all would have been lost if as a fluke they had not run another 24 track machine when recording the basic tracks. Luckily, they had this back-up. Then they had to match up all the new parts with the old parts with no time code or midi. They had to do it like a DJ matching the snare and kick on one side of the headphones with the old parts on the other side.

Somehow they got through it and completed the album that would become ‘Rumours’. This album shipped  platinum and upon its release in February, 1977 it peaked on the top of the US Billboard Chart and the UK Album Chart. The band won a Grammy Award for the album and it is still one of the best-selling albums of all time with over 40 million sold worldwide.

It is an album that is loved by people from all walks of life as having three songwriters opens up the range of emotions and perspective. The themes are ever-present throughout the generations and the songs continue to sound as fresh today as when they were released nearly three decades ago.

DJ Shadow To Sell Records From His Personal Collection