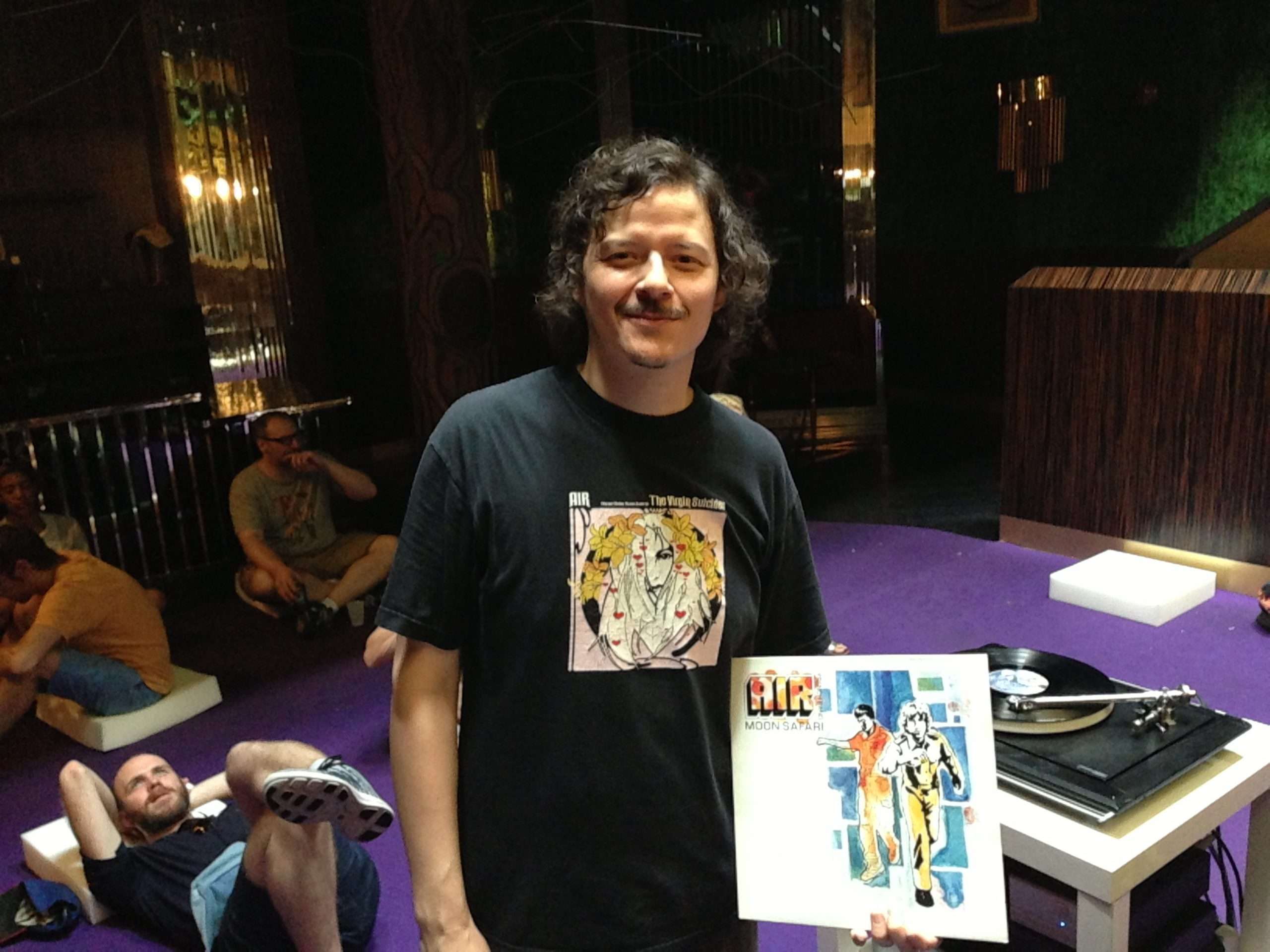 Classic Album Sundays presented AIR’s “Moon Safari” at our London and New York City monthlies. The London event was hosted by CAS founder Colleen ‘Cosmo’ Murphy whose presentation is below. Our resident New York musicologist Ron Like Hell presented the album in Williamsburg and wrote up his own introduction about his discovery of the LP.

Ron’s intro to the presentation…

“When I first heard AIR,  it was on my first ever trip to London in the Spring of 1996. I got to experience a very different approach to deejaying after discovering records in the vinyl shops of London’s SoHo shop district.  Luckily for myself, I got to score some amazing music first hand by being in the right place and at the right time. Acid Jazz was replaced with Trip-Hop and the new Bristol sound popularized by Massive Attack, Tricky & Portishead. In those days in the US, only chill out rooms at raves and underground nightclubs or weeknight experiments at major clubs were supporting this more complex and sophisticated style of music spun with a more relaxed and passionate approach to the art of deejaying.  The beat had a sway and felt perfect for listening to after a weekend of dancing or after a hard day on the job.

“When I first heard AIR I was running a DJ record pool that serviced records to some of the coolest house, hip-hop, soul and lounge spinners in New York City.  My first introduction to the band whose acronym stands for ‘Amour, Imagination, Rêve’ (tres francais n’est-ce pas?) was the initial shipment of boxes of their EP ‘Premiers Symptomes’, a compilation of their earlier singles, followed six months later by their debut album ‘Moon Safari’.

“Also at this time, French dance, electronic and lounge music was breaking beyond continental Europe. Daft Punk were gleaning inspiration from disco crate-digging,    Dimitri from Paris had become the premier lounge sophisticate, DJ Cam was mashing up jazz with hip hop flavas, The Mighty Bop put a French touch onto trip hop and St. Germain were bringing jazz and blues to the dance floor. All of these acts, however,   relied upon samples to create their signature sounds.   However, when I checked out AIR on the turntable for the first time, I was struck by the fine balance of electronic sounds with more traditional acoustic instruments. This was not a mash-up of cleverly sought samples but rather music that was written via more conventional songwriting methods and embellished with vintage keyboards and other more ‘traditional’ instruments such as strings. The result was immaculately produced, warm, cinematic pop.

“AIR is comprised of Nicolas Godin and Jean-Benoit Dunckel who have been friends since their student days when Godin studied architecture and Dunckel mathematics. They had previously played together in a band called Orange which also featured future French dance producer Alex Gopher. Godin wrote a song as a tribute to Le Corbusier called ‘Modulor Mix’ for a Source compilation and that was later re-released on Mo’Wax. For his next singles he asked Dunckel, a classically trained pianist, to join him in AIR.

“With the help of producer / engineer Etienne de Crecy, the French duo produced more singles which were later compiled on the ‘Premier Symptomes’ EP. Their sound drew from other European spacey electronic pioneers such as Jean Michel Jarre and Vangelis, Krautrockers Tangerine Dream and Kraftwerk, Eurodisco kingpins like Giorgio Moroder and Cerrone, and of course the king of Gallic Pop, Serge Gainsbourg.

“‘Moon Safari’ was released in early 1998 with artwork designed by Mike Mills which reinforced their “cool” factor. The back cover features a vehicle that is a combination of a Volkswagen bus and a space shuttle which Godin told Toazted helps people to understand their music. ‘Air music is a mix between past and future. We have a lot of reference. We did not throw away any of our culture. We keep what’s good from the past, but we wanted to go further – we didn’t want to redo the past (like Lenny Kravitz).’

“The album became a hit due to the gravitas of its three singles, ‘Sexy Boy’, ‘Kelly Watch the Stars’ and ‘All I Need’ which is my personal favourite tune on the record. The story of this song starts with an earlier AIR single ‘Les Professionels’ which is lovely and ethereal but more of a sketch. The bass-line is close to the later reincarnation of the song as is the single string line courtesy of the ARP Solina String Ensemble. There are the other wonderful keyboard sounds such as sound effects from the Minimoog and the gorgeous keyboard mélange of Fender Rhodes, Wurlitzer and organ.  Although an instrumental ‘Les Professionels’ does have a chorus section and breakdown making me wonder if the boys had always mapped the song as a template for a later version. Although there is a sample of a crowd of people, overall listening to it makes me yearn for a great vocal line et alors, voila. On their debut album AIR delivered.

“After the initial Norman Greenbaum ‘Spirit in the Sky’ opening moment (possibly consciously implying the cosmic allusions of which AIR are so fond), I am first struck by how incredibly well recorded is the second coming of the song, now entitled ‘All I Need’. It sounds sweet! Like their acronym, there is a lot of sonic space as the instrumentation is sparse enough that the song truly breathes. The gentle picking of the guitar sounds pure and intimate and then drifts in the much-desired vocal. The microphones are up close and personal to American chanteuse Beth Hirsch lending an overall intimacy and the breathy backing vocals are particularly beautiful.

“This intimacy sounds intentional and when I told a friend that this month’s album was ‘Moon Safari’, she replied, ‘Oh, sex music’.  The word ‘sexy’ dots many interviews with Nicolas Godin and Jean-Benoit Dunckel whether they it is because vintage keyboards are more sexy than computers or that practicing piano etudes each day is a sexual need. My favourite quip is from Godin ‘Music has to be sexy. That is why we’re sad to be compared to Pink Floyd all the time. They were a good band, but their music was never sexy. I guess the secret – although it’s not a secret – is to have the desire to be loved by a woman as your main inspiration.’ As the beatniks used to say, ‘Orbit me baby’.

“However, like their space rock counterparts’ ‘Dark Side of the Moon’, space-pop AIR’s ‘Moon Safari’ appeals on a broad level. It may not have spent 14 years on the charts but it certainly surpassed expectations by reaching number six on the UK Album Charts and it may be because the music is somewhat undemanding. It doesn’t ask too much of its listeners and it not ‘difficult listening’ in any way. It does not dictate heavy themes such as morality and politics but is gentle and fun atmospheric pop that allows listeners to drift in and out. Although there is substance, it is a great example of modern day easy listening, but instead of being ‘Music to Watch Girls By’ it is more like ‘Music to Watch Clouds By’.